Fresh starts bring back a renewed sense of the possible once the old ways have exhausted their potentialities and have become weighted with complications. It's a season finale of the age-old contradiction of the end of something bringing the beginning of another. Don Draper meandered throughout the season trying on different identities - from recently-divorced to newly-engaged; personally reflective to business obsessed; Don Draper to Dick Whitman and back again.
The episode begins with Faye visiting Don in his apartment early one morning. He's got a "sick feeling in his stomach," and, ever the shrink, she suggests that he cures this ailment by dealing with his past. But the episode is titled Tomorrowland and Don has always been one to run away from the past, never embrace it. Dealing with who he was is a terrifying prospect, fraught with panic attacks and shame. Faye says reconciling with one's past will make him "human like the rest of us," words with assuaging intentions. But Don's about to escape to Disneyland, where he can revel in a world of fantasy.

Megan accompanies him to Los Angeles to help with the children, patiently singing them French lullabies and cleaning up their milkshake messes. The opposite of not-good-with-children Dr. Faye, "You're like Maria von Trapp," Don tells Megan. And he follows that storyline when he eventually visits her room to seduce her.

During the American Cancer Society pitch, Don explains his actions with, "I think in my heart it was an impulse, because I knew what I needed to do to move forward," which he continues with an impromptu proposal to Megan.

Don brings his children to visit Anna's house, where all that remains is the paint on the walls, a piano and Stephanie. Don temporarily mixes his children (his future) with his past (Dick Whitman). Sally sees 'Dick + Anna '64' on the walls and innocently asks "Who's Dick?" Don answers "that's me. That's my nickname sometimes." It's a moment where he partially embraces his true identity as Dick Whitman, but toeing the line becomes more frightful than separating the two.

Stephanie gives him Anna's engagement ring from the real Don Draper. But as I said in a previous post, Don is nothing but the ultimate charlatan. With a hand-me-down engagement ring, he senses his opportunity to restart his life, yet again, as Don Draper. "I feel like myself when I'm with you," he tells Megan before proposing to her. He feels like who he wants to be - Megan is still a blank canvas onto which he can project himself. She smiles (with her messed-up teeth) at him and coos "you have a good heart... you're always trying to be better." This is exactly how he wants to see himself and he's found someone to love him without challenging him to actually making positive changes.

When they return to the SCDP office, their engagement overshadows Peggy's business achievement. She's just won the only new account since Lucky Strike's windfall and the office romance sends her to Joan's office, where the two of them bond. "They're all in-between marriages," Joan says and goes on to predict that Don will probably make Megan a copywriter, both a perfect example of someone who's slept her way up the corporate ladder and a potential source of conflict for Season 5! 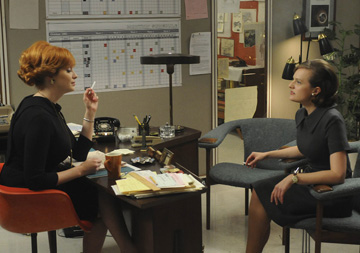 Having witnessed the damage done otherwise, Ken Cosgrove refuses to integrate family and business when the partners want him to set up a meeting with his future father-in-law. "I'm not Pete - sorry about that." Clients become seducible and then disposable, and fusing that mentality with family only spreads the plague. He at first says, "I know that every account I have will eventually leave me," and then offers the trite, "Cynthia's my life - my actual life." But unlike Don's clichéd declarations to Megan, it looks like Ken actually lives by what he says. He separates his business and personal lives. Don is literally becoming married to his job.

Back in Ossining, Betty becomes the most wretched of the whole season, affecting three lives with her capricious pettiness. The Frances Family is finally moving away and Glenn stops by to say 'good-bye' to Sally. Carla hesitates but then allows him to see her, noting that Betty Dearest will be returning soon. Alone in her room, Glenn and Sally share a platonic parting where he promises to visit her when he learns to drive in few years.

Betty returns home just in time to see Glenn in the kitchen. Displaying the kind of courage to speak up for himself that most adolescents lack, he point blank asks her why she hates him and then fires, "Just because you're sad doesn't mean everyone has to be." Carla tries to assuage the situation by saying that the two children are just friends. Betty fires back with, "When did you decide you were their mother?" shortly before firing her without allowing her to say 'good-bye' to the children. Ironically, Carla has been the only maternal figure in the children's lives. Later, Henry confronts Betty about refusing to give Carla a reference and of course, she can only throw a temper tantrum about no one being on her side. Betty's childish sense of entitlement makes her say, "I wanted a fresh start." But Henry retorts, "There is no fresh start... Lives carry on" and follows up later with, "No one is ever on your side, Betty." Is this because she's always acting out of her own self-interest? With no one left to yell at, Betty curls up in Sally's empty bed - the sheets stripped and the warmth gone - another reference to Betty being just a girl herself. Is it also foreshadowing more nights sleeping alone for Betty Francis? 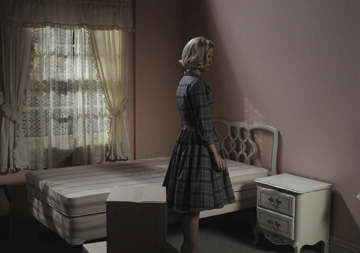 She even tries to return to Don for validation, primping herself in the empty Ossining house while she waits for him to arrive for the real estate appraisal. When he breaks the news that he's engaged, she looks away and does her darndest to fake happiness for him. But her disappointment is always transparent and Don sees it. "Things aren't perfect," she says and Don responds "so, you'll move again," - which is what he always does.

Joan makes a fresh start with herself and her marriage as mother-to-be. On a long distance call to Vietnam, she gossips with Greg about the office romance and the bond over her pregnancy. Her perfect-marriage fantasy is finally coming to fruition, but through the deception of carrying Roger's child. So we have another cliffhanger for next season - how will Roger handle Joan raising his child?

In all actuality, it's payback time for Dr. Greg - the man who raped her to assert his sexual dominance and wipe away her past is about to unwittingly raise a child by another man. That's even more validating than him being blown away in Vietnam. (Things will get interesting when the kid pops out with a head full of silver hair and witty one-liners.)

Joan and Peggy bond over the cliché of Don's rushed marriage in one of the most satisfying scenes of the season. These two are actually becoming friends (!) because they share professional frustrations of fogging up the glass ceiling. They've both worked hard to get where they are, and though Joan's promotion is currently in title only, it was validating to see her getting the credit she deserves for running the office. Peggy was not so lucky this episode. Not only does Megan's potential rise up the ranks mimic how everyone thinks Peggy slept with Don to get to where she is, it overshadows her hard work. While Peggy exasperatingly smokes, she complains about how her professional success is overshadowed by office romance - "A pretty face comes along and everything goes out the window."

And out the window is where Don stares at the end of the episode, and the season. As Dr. Faye said during their break-up call, he only likes the beginnings of things - the surface of situations when the clichés actually work. Never satisfied, he roams the earth in a constant state of anxiety about who he is and what he has. As we saw this season, any real reflection on his part is torn out to make room for an impulsive advertisement - the continuous manipulation that what you have is never enough. 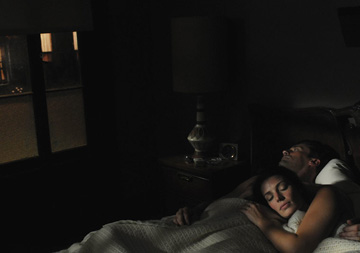