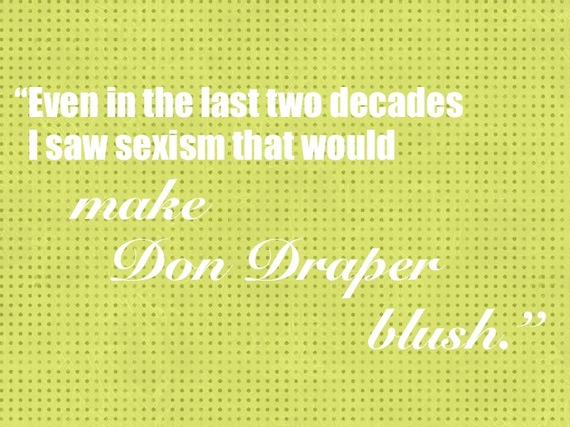 Psst. Can you keep a secret? Mad Men was my favorite TV show. Like ever. Shocker, I know, since I am an advertising copywriter. And my debut novel Copygirl chronicles the (ahem) fictional exploits of a female copywriter trying to beat the boys' club at their own inane game of keep-away. Not unlike Mad Men's Peggy Olson.

So, not a shocker, really, (and not a bummer) that reviewers have made comparisons between my book and the dearly departed series about a male-driven ad agency in the 1960s. The lovely author Sarah Bird called Copygirl a 'modern twist on Mad Men' and I didn't even have to pay her to say that. Then Publishers Weekly said, 'Here's what happens when girl power storms Mad Men...wickedly funny and smartly sweet,' and my co-author Anna was all prepared to start having that critic's babies. Even though she is totally done having kids.

But even though my story and that Emmy-winning TV series (Go John Hamm!) both have the advertising world as their backdrop, my real inspiration wasn't Mad Men but rather Ad Women. As in the ad women I was lucky enough to meet in my career, plus the ones who lit the way for us, blazing through the glass ceiling wielding pens like blowtorches. The real Peggy Olsons had to work twice as hard as men, often for half the glory and pay. We really have come a long way, baby, but even in the last two decades I still saw sexism that might even make Don Draper blush.

In my first advertising job, I was expected to water my boss' plants, shop for his dress shirts and buy gifts for his mother. Fine, I was paying my dues as a lowly assistant, but the last straw was when he pinched my butt. Needless to say, I let that pig's plants die.

Moving up the ranks of the creative department should have shielded from such chauvinism, right? Wrong. I can't even count how many times I got sent into new business pitches to 'chick up the room.' When it was time to write for Summer's Eve, Midol or Maidenform, you can bet they didn't ask the boys' club. But we have to decide how we're going to fight and I decided to band together with the women around me and make sure I was doing work that couldn't be ignored. And the bright side to 'chicking up a room' means sometimes you get sent to Paris for a toilet paper project aimed at females....and in between all the croissant-stuffing and café au lait-sipping, you get to team up with the chick you'll write novels with a decade later. Score one for the girls' club.

Still, even after being sent to France, there was only so far some at that ad agency wanted to see me go. One partner actually told me to my face that there would never be a female creative director at his agency ever! But the clients loved my work, so he was forced to pay me like one anyway, and I loved watching all the copygirls who came after me rise up to take that title. True, what they say, success is the best revenge.

So props to Mad Men, but mad love to Ad Women. Because when someone tells us we can't, it only makes us want to show them we can. They say it's the journey, not the destination, and one of my favorite parts of Copygirl is that it's a celebration of the people--men and women--who help a heroine on her climb. Because in the ad world and every world we do get by with a little help from our friends. And the truth is every bit as inspiring as a TV show.