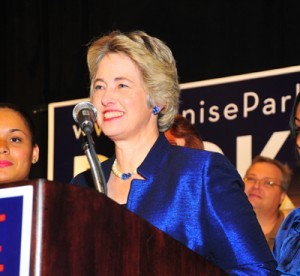 When Houston elected Annise Parker in December and became the biggest city yet with an openly gay mayor, a lot of us got surprised comments from out-of-towners: "Who knew Houston was a liberal town," cheered my friend Liz in Philadelphia. "We've never elected a gay mayor! Heck, we've never elected a woman -- and neither has New York or LA!"

The headlines, rightly focused on the gay breakthrough, elided that second amazing fact. Parker's ascension also makes Houston the biggest U.S. city with a substantial history of female leadership. Today, of the 50 biggest US cities, only three have women mayors. That's 3. Along with Houston, there's Baltimore (not a shining example recently) and Fresno. By comparison, six states currently have female governors, and women hold 17 percent of the Congressional seats. Not big numbers, but more than the mayors.

Thirty of the 50 biggest cities have had a female mayor at some point (Seattle, the trailblazer, elected one in 1926), 12 have had more than one (the biggest of those are San Antonio, Dallas, San Diego, and San Jose), and 20 have had none. That's 40 percent.

By the time those two left office, Houston had its first woman mayor too. Kathy Whitmire stayed in office for ten years (through 1991), along the way appointing the first African American police chief (Lee Brown), and when he left for New York, the first female police chief of a major U.S. city (Elizabeth Watson), and the first Latina to be chief judge of the Houston Municipal Court (Sylvia R. Garcia, now a Harris County Commissioner).

What difference does a mayor's gender make? Though it might seem progressive in itself, female leadership (like gay leadership) doesn't guarantee progressive policies (see Wasilla), nor does it guarantee good behavior (see Baltimore), any more than male leadership does. But politics as usual transforms in positive ways when women of all political stripes participate: more citizens' perspectives are represented (a plus in a democracy), and once many women populate the field, nobody can run as "the woman candidate."

As it happens, women leaders often do introduce change, both because they know some things from experience that their male counterparts do not (like the need to support families and workers), and because they're often able to see the possibility of stepping outside established patterns, as with Whitmire's appointments.

Why do so few women run? Because they aren't often asked, and when they are elected, the masculine political culture chases many of them off. Women's low rate of participation in business leadership roles (just 3 percent of Fortune 500 CEOs are women) also affects political participation, since the two often intersect.

But Parker comes to office in Houston in a context of active female policy makers. Houston's City Council is about half female, the highest proportion of any big city. The University of Houston has an entrepreneurial female president (Renu Khator, its second). And while the business leadership is overwhelmingly male, inroads are sometimes made, here as elsewhere.

Women are not at parity in Houston, but this year we've moved a bit ahead in the slow trickle up that has characterized the national progress of women in government and business over the past 30 years. Because nationally the family support infrastructure hasn't changed (good affordable childcare is still only available to a few), women all over haven't been able to move in sufficient numbers into positions where they could change it. But women are building toward the critical mass that changes the dynamic.

Is Houston a liberal town as my friend now thinks? Well, sometimes. This politically and socially diverse city went blue in the national election in '08, and red in '04 and 2000. It's elected effectively Democratic mayors for the past 12 years -- and it's home to George H.W. Bush and Tom DeLay. Its history as a wildcatting town, open to people making their own fortunes, along with the relative brevity of its big city status, means that on many fronts there are fewer social barriers here than in apparently more progressive places.

Is Houston a business town? Pretty much. Not surprising that in a recession the nation's energy capital, a teeming metropolis with growing numbers of citizens to employ, would elect the candidate who presented herself as most fiscally conservative and responsible, open to innovation where appropriate, and with a proven track record as city controller and council member.

"I'm going to be the mom telling you to eat your vegetables and you don't get dessert. I'm trying to make sure you have enough food to eat," Parker told the city the day after the election. In hard times, the frugal housewife saves the farm. Mom as fiscal disciplinarian.

Not the metaphors the headlines might have led the nation to expect, but not a surprise in Houston, where Parker's been out so long, her sexual orientation turns out to be immaterial. She's been with the same partner for 19 years. Her kids are well behaved. Pretty ordinary stuff, even boring compared to the high-jinks the straight politicians entertained us with last year. So why not put to use the skills and knowledge she'd developed on our dime in her last 12 years in office ? The voters turn out to be more open-minded and pragmatic than the pundits expect.

Parker's election throws down the gauntlet to all cities to expand their resource base by actively advancing more women and minorities through the public service and business leadership pipelines -- and then drawing on that experience and electing them mayor. Regularly. While firsts in all categories (gay, black, female, Latino, Asian) are important, it's the seconds, thirds and so forths that give real traction to change.

This originally appeared in the Houston Chronicle.