On her show last night MSNBC's Rachel Maddow lambasted the latest coal lobby astroturf campaign for using generic clip art stock photos for their "FACES of Coal" campaign. I guess the coal lobbyists behind the campaign couldn't find any real people willing to pose as pro-coal cheerleaders and instead had to rely on stock photo stand-ins instead. 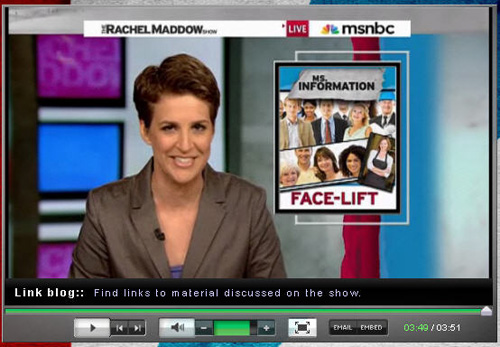 This story was first uncovered by the hardworking folks at Appalachian Voices who are fighting to save the mountains of Appalachia from the hugely destructive and toxic industry process of mountain top removal.

Maddow also gave a quick shout-out to DeSmogBlog on her show, presumably for our work to uncover the high-powered Washington, DC public relations company, Adfero Group, that appears to be working behind the scenes on the FACES astroturf campaign.

Brad Johnson at the WonkRoom reported yesterday that Adfero Group also has significant ties to the Republican Party.

Here's a quick transcript of Maddow's comments where she compares the FACES campaign to the recent Bonner and Associates fake letter scandal, calling them both the "most blatant fake grassroots corporate PR effort ever":

Maddow: When the coal industry stole letterhead from the NAACP and used it to write letters to Congress to make it look like the NAACP was against cap and trade political science textbooks across the country had to be scrapped and re-written to account for the new, most blatant fake grassroots corporate PR effort ever now they've topped even that.

Maddow should be congratulated for keeping on the astroturf story while most of her peers at other major TV outlets have ignored it. It is important that this undemocratic practice continue to be dragged out from the backrooms and exposed.