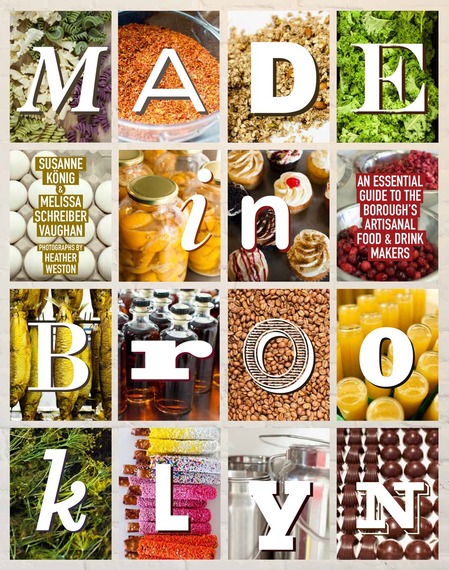 Who knew? I've lived, shopped and written thirteen cookbooks in our Park Slope brownstone, and thought I knew this trendiest of boroughs pretty well. Now along comes a vibrant and user-friendly compendium called Made in Brooklyn, highlighting 111 exciting food and drink products made locally in small batches by quirky artisans and in large batches by famous companies.

Many of us know about the pioneering Brooklyn Brewery and Jacques Torres Chocolate setting up shop here -- followed lately by Hillary Clinton's campaign headquarters. But there are more obscure newcomers to the burgeoning food scene. Within easy walking distance I can buy one of Union Street Honey's 600-jar production, whose bees meander through the Brooklyn Botanic Garden. There's Empire Mayonnaise, a teeny storefront selling such flavors as white truffle, ghost pepper and smoked paprika. Brooklyn Brine, redolent with pickled vegetables, has added a vegan restaurant called Pickle Shack. Two of the country's most famous ice creameries -- Blue Marble and Ample Hills -- are nearby, as is Gotham Greens' hydroponic greenhouse atop a Whole Foods store. The city's best bagels come from Bagel Hole (too bad we don't have our own Russ & Daughters).

Made in Brooklyn, published by Brooklyn-based Powerhouse Books, is written and photographed by three inveterate residents: Susanne König, who hosts creative cookbook parties for the borough's restaurants and food producers; Melissa Schreiber Vaughan, a recipe tester and co-author of the "The New Brooklyn Cookbook," and Heather Weston, whose food photos get you hungry.

As I write this, Paris's Au Bon Marche department store is winding down its "Brooklyn Rive Gauche" promotion featuring all manner of our borough's products. They have Brooklynized the store, calling the process to Brooklyniser (BROOK-lin-EE-SAY). And hot restaurants in Paris have copied our hipster esthetic of industrial roughness, minimal decoration and recycled materials. If it is trendy there, they call it tres Brooklyn.

When New York City (and all of the Northeast) de-industrialized, millions upon millions of square feet of abandoned manufacturing, warehouse and brewery buildings languished empty but largely intact for more than 50 years. Creative types, pushed from Manhattan by soaring rents, colonized areas of Brooklyn where space was plentiful, rent was cheap and few people walked the streets at night. They opened funky restaurants and bars and they began making things -- art, music, idiosyncratic clothing, books, jewelry, custom furniture -- and lots of things to eat. Food production, claims the book, is the only element of manufacturing that's growing in New York City (unless you count the fecundity of high-rise condominium developers). This resurgence of small-scale manufacturing now has a name: It is called the "maker economy."

Made in Brooklyn recognizes that this didn't start yesterday, for Brooklyn has a long food-and-drink history. Interleaved among the newcomers are stalwart Brooklyn brands: Queen Ann Ravioli & Macaroni began in 1972; Joyva Halvah in 1907; Gillies Coffee in 1840; Fox's U-Bet syrups in 1900; Damascus Bakery, 1930; Acme Smoked Fish, 1954; Sahadi Fine Foods move here from Manhattan in 1948.

Beyond walking distance for me (and worth the trip) are Brooklyn Roasting Co, started by Jim Munson, a Brooklyn Brewery ex-pat; Mama O's Premium Kimchee; Salvatore Bklyn for their fresh ricotta; La Newyorkina for Mexican-flavored ice pops; Butter & Scotch for boozy pies and cupcakes, and Bien Cuit for its breads and pastries.

How far have we come? This book lists 13 spirits producers, four breweries (there were 45 in 1900!), six coffee roasters, five ice cream makers, eight chocolatiers and 15 condiment makers. And there remain at least ten million industrial square feet to be filled.

Focusing on gentrifiers, Made in Brooklyn omits large swaths of another Brooklyn: Russians of Brighton Beach, Caribbean communities, Syrian, Persian and Israeli Jews, throngs of Latinos in Sunset Park and the borough's three Chinatowns. Perhaps there will be a volume 2. Can't wait.