The second biennial exhibition "Made in L.A. 2014," featuring 35 Los Angeles-based artists, "permeates every available area" of Los Angeles' Hammer Museum, according to the exhibition catalogue.

The show is laid out as a sprawling network of self-contained pockets, each mini-exhibition endowed ample room to breathe. One aqua-toned sector, an immersive installation by Samara Golden, is packed with a chorus of thrift store dolls transformed into moon-faced portraits with the help of 3D glasses. Viewers jam into a brief funhouse experience as their own faces are recorded and then projected onto the dolls'. There's something very L.A. about watching the crowd amass around the mirror, even if it is for the sake of art. Another room contains something completely different, for example, Max Maslansky's dreamy stain paintings, staged pornographic moments rendered hazily on thrifted bed sheets. This, too, is L.A., in the pastel '70s palette and domestic fantasies. 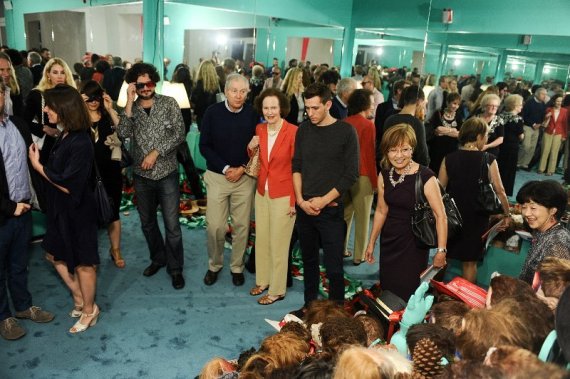 Navigating through the show's many sectors, autonomous yet not separate, feels like taking an aimless drive through the city's many individualized parts, each neighborhood offering up a singular possibility of life in Los Angeles.

The show is a slimmed down version of the 2012 biennial; it's also a vast improvement. Instead of 60 artists there are 35, and five curators pared down to just two -- the new Hammer chief curator Connie Butler and the critic who slammed the original, Michael Ned Holte. There is one exhibition site instead of three. One exception to the slimming: three prizes for the showing artists instead of one. While 2012's iteration seemed almost like a defiant cry from New York's cultural little sibling, the current iteration lacks that same feeling of having something to prove. As local blog L.A. I'm Yours put it, "It is in no way over confident or puffy."

Those who flock to New York's art scene feel a pull, in many cases, toward the belly of the (cultural) beast, a nagging desire to be at the center of things. Though you may be poor and struggling, living in that historic city allows you to walk amongst giants, absorbing their power and potential through some kind of urban osmosis (the effects of which are, to say the least, questionable). There is endless inspiration in the close proximity to success, and yet being within reach of art history's MVPs can also bring adverse effects. Their influence can be inspiring, but also stifling, contagious or perhaps infectious. Sometimes, this leads to bad art lacking in creative freedom. 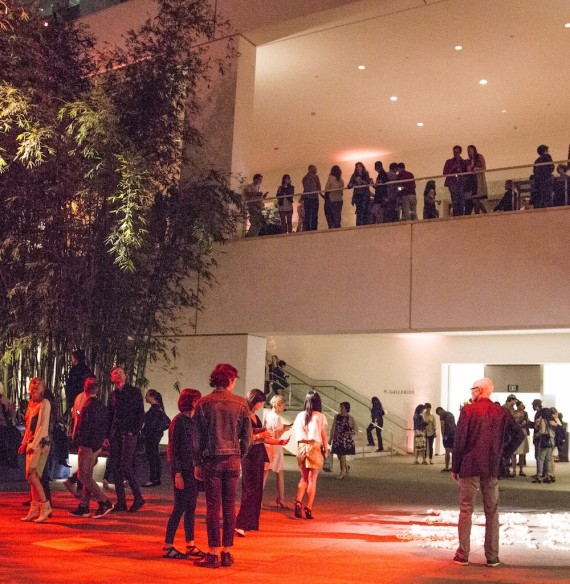 "For much of the past 15 years," Catherine Wagley wrote in L.A. Weekly, "overly intellectually and self-consciously historically informed work has been so pervasive that too much of what was shown in galleries or 'finger-on-the-pulse' group museum shows either seemed to be announcing, 'Look, professor, I understood all the theory,' or looked stuck, frustrated by its inability to escape its historical references." Los Angeles' art scene, at times, got caught chasing inescapable closeness that's felt so profoundly New York, for better or worse.

"Made in L.A. 2014" feels different. Instead of charging toward the center, the artists seem intrigued by specific pockets, content to live on the periphery. Just as L.A. is made up of micro-environments whose citizens often feel little need to venture beyond their local domain, so the Hammer artists seem content not to engage in the almighty dialogue of Art, but just to make it. The rhizomatic layout of the cityscape is mapped onto the biennial's skeleton, and it feels graciously manageable, even generous. 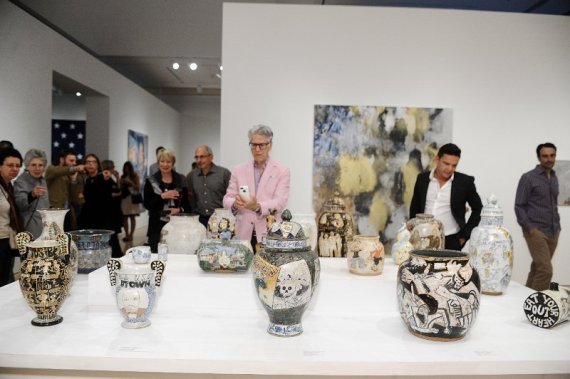 Most of the exhibited artwork is not tethered to the trends of today, whether artistic, social or political. Instead there's Tony Greene's dismal glimpse at the early days of the AIDS epidemic, and the institutional indifference it faced. There are Magdalena Suarez Frimkess and Michael Frimkess' hand-painted ceramics that incorporate influences like Cubism and Disney cartoons into rough-edged pottery. The idea of "contemporary" too becomes decentralized, an appropriate condition for a city that so often feels trapped in a bygone era, whether the golden age of Hollywood or the sad glamour of the '70s.

Of course, most biennials don't commit to a single perspective or theme, but "Made in L.A." seems particularly afloat, driven by ideas of locality, anti-heroism and free play. "I don't have a goal," Magdalena Suarez Frimkess explains of her ceramic practice, which she's been at for half a century. "I just play it day by day. It's like eating, you have to eat everyday." Like Frimkess, the biennial seems to have nothing to prove, just lots of treats to share. 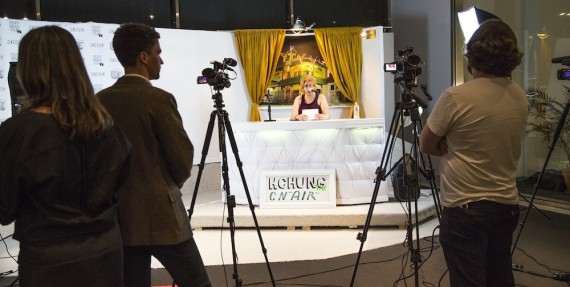 The inclusion of local collaborations like Alice Konitz' Los Angeles Museum of Art, located in the driveway of her Eagle Rock Studio, or the nonhierarchical cooperative KCHUNG, a Chinatown-based radio station that dabbles in art, music, philosophy and whatever else, further contribute to the supine stature of this new biennial model.

"Made in L.A. 2014" has another standout aspect separating it from the majority of such exhibitions worldwide -- a majority of the artists are women. As Christopher Knight noted in the L.A. Times, "This may be the first major biennial exhibition anywhere in recorded history that features more art by women than by men. Given the oft-repeated statistic that more women than men go to art school and become artists, that makes simple sense." He makes it sound so easy. 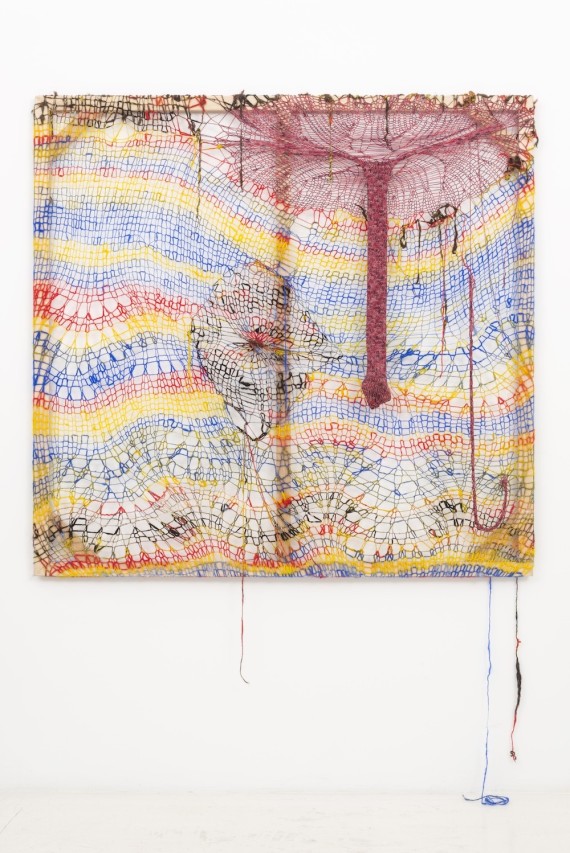 The relationship between art and gender is revisited throughout the biennial, by subverting traditionally feminine techniques, like Channing Hansen's "knit paintings," or traditionally masculine ones, like Caitlin Lonegan's anti-AbEx abstractions. Hansen, who calls himself an "armchair physicist," hand-dyes and spins different fiber blends -- silk, alpaca, mohair and wool -- into massive, colorful webs according to a predetermined algorithm. The seemingly spontaneous color fields, which transcend scientific assumptions by making yarn drip, weave together science and craft as twin tools of art, privileging neither.

Lonegan's paintings posture themselves opposite macho mid-twentieth century abstract expressionism and all the connotations of heroic genius associated with it. Instead Lonegan allows her canvases, which she works on synchronously, to build slowly over time, some taking over a year to create. Emerge is perhaps a better word for Lonegan's process, which she employs through "a heap of borrowed tricks" according to the Hammer catalogue, including frottage and embossing. Reveling in shallow spaces and moments of metallic glitter, Lonegan remixes Los Angeles tropes into her disorienting canvases, revealing how "serious" abstraction can materialize through unlikely, not all too exciting narratives. 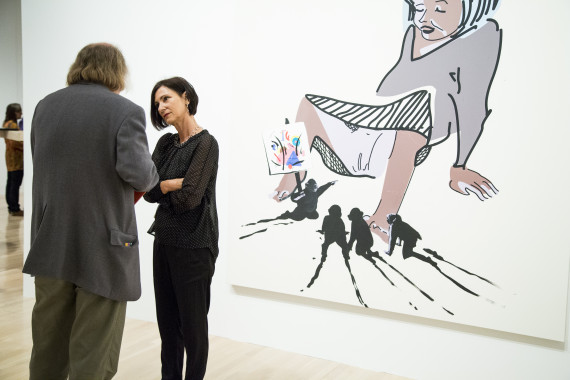 No artist brings gender to the center of the conversation more than Tala Madani, whose paintings, drawings and show-stopping stop-motion animations create worlds in which women are absent and men, left to their own devices, engage in bumbling, perverse, violent and all-around moronic rituals. The portrait of male society as an elaborate bundle of nincompoops, not skimping on the gross-out tactics, features everything from senseless stabbing to rows of butts in the breeze. Its affect settles somewhere between Mike Kelley and a "Dick and Jane" picture book. This show's inclusion of animated videos, each minute made from 2,500 paintings, brought the childishness and grotesqueness to new heights.

Madani's addictive films, reminiscent of painfully surreal Saturday morning cartoons, seem to comment on the L.A. lifestyle, where creativity and entertainment can't decide whether to work together or apart. Knight added that the biennial as a semi-coherent whole poses "questions of the relationships between profoundly singular consciousness and deep social connectivity." This balancing act between the individual and society is especially prevalent in Los Angeles, a place where it's possible to avoid unpleasant people and issues, simply passing them by in your air conditioned vehicle. To engage with the community is a choice, unlike in New York, and many artists blatantly grapple with that option.

In New York, on a single commute to work, you're bound to encounter countless strangers, overhear strange conversations, physically bump into different ways of life. Although this provides ample opportunities to encounter beauty, ugliness and inspiration before you take a sip of coffee, there's a darker side to living always in public. You're constantly self-aware, self-curating, pressed up against those who came before you, scrambling to make progress before someone comes along after you. Although L.A. is known for its plastic citizens, in many ways the Western metropolis creates a safer space for its inhabitants to just be. Instead of riding the subway, think of jamming out alone, dancing wildly with the windows up, with no outside forces able to disrupt your groove, until you choose to engage with them. 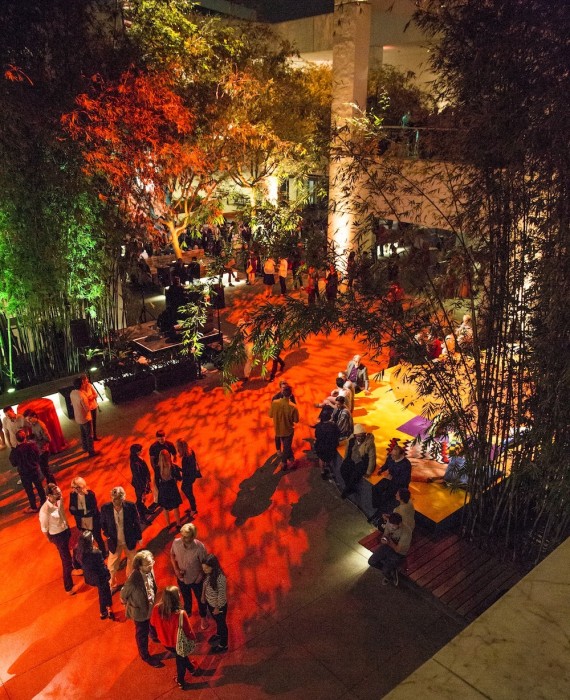 "Made in L.A." showcases artists who, regardless of where they were born, chose to make art in a particular, and quite temperate, climate. The biennial questions what it means to make art in Los Angeles, while, of course, refusing to stick to a single answer. But there seems to be something about L.A. art that could only result from the disconnected, sprawling flatland where so many adults make a living playing make-believe.

Something about living outside of the center, combining work and play, dwelling somewhere a bit more removed from reality, jamming out with a total lack of self-awareness. The L.A. crop, decidedly separate from today's market-climbing trends, privileges space. Space for viewers (and artworks) to roam, space for new ideas to grow unbothered, space for artists to unbutton their collar and make things.

The prominence of women in the show, as well as the interplay between so-called feminine and masculine fields, adds another interesting factor to the New York/Los Angeles comparison. There is something wonderfully un-macho about the Los Angeles sprawl, all flat and decentralized. It appears unconcerned with creating a single narrative, an artistic mythology to rival New York's, just because the city setup so clearly doesn't call for it.

And while New York's most recent biennial failed to yield a diverse output, Los Angeles, in typical California fashion, made it look easy.