My theological writings arise from my personal journey through faith and doubt, difficulties and joys. Many of our encounters with God inform our theology, make us who we are, and shape our living. I position my writings to reflect this part of my life that I try to live out as faithfully as I can.

In similar ways, religious artists try to capture some of the biblical and theological stories that live in their hearts, minds, and souls and recreate them in different art media. Religious art expresses theological journeys, struggles, and reflections on who God is and who we are. It brings beauty and wonder to the world as artists create representations or imaginings of the divine and the divine's interactions with creation. Through art we gain a deeper understanding of life, God, and the world. One religious artist who tries to capture provocative theological images in art is Caroline Mackenzie.

Caroline Mackenzie grew up in rural Norfolk, England and at fifteen decided to become an artist. At that age, she had no critical sense that there was any problem with the fact that the art books in the school library had no examples of women artists. She saw that being the artist was normally a white male enterprise with women playing the role of the beautiful, inspiring muse, or model. This led her to explore feminism, spirituality, and religion. She tried church but found no connections with her pressing questions. Then, at the British Museum, she discovered Indian sculpture. She found an art world that had meaning beyond entertainment and she also found some resemblance with her own body.

After graduating, Mackenzie went to India. It was a profound learning experience to be in a place where religion and devotion formed an integral part of everyday life. She stayed at INSCAPE Art Ashram, a small Christian community established by Jyoti and Jane Sahi. Here she had her first meaningful introduction to prayer. Her life in India formed her theological underpinnings that has influenced her art ever since.

In 1988, she returned to the UK and worked on a series of church commissions that culminated in a three year project at St Helen's Catholic Church, Caerphilly where she created wood carvings and made designs for the altar frontal and tabernacle setting. This project released tremendous energy and gave her a feeling for what it is like to engage and form public culture. This is the platform or area from which women have been excluded. How many churches or chapels have been designed by women? The church commissions provided her with public work while her inner psychological explorations found expression in paintings that she exhibited in art galleries.

In her attempt to integrate the inner and outer aspects of her life, Mackenzie became increasingly interested in feminist theology. In her continuing search for integration and wholeness, she turned to working in bronze as this medium enabled her to forge closer links between her inner and outer worlds. This fusion is authentic in her search for expression, empowerment, and integration as a Christian.

She is now working at the interface of the sacred and the secular as it has developed in Europe. Christian images of women often look disembodied, disempowered and a-sexual, whilst in the secular tradition, the female has a real body, but the image focuses on its erotic qualities. In neither context do images of women express active, creative, and empowered subjects with rights and dignity. Therefore, Mackenzie draws on the iconography of divine women in Indian religious art. Integrating her insights with the Christian tradition, she expands the idea of the sacred to include the full humanity of woman as included and playing an important part in Christ's redemptive humanity.

Mackenzie creates a form of art based on Christ's life that both women and men can identify with. A working relationship between feminist theologians and artists is productive. Artists can develop images and symbols that bring insights from the theologians into the wider public domain and theologians can help both scholars and lay people to understand this art and how it relates to scripture, tradition and the contemporary context.

Below are four bronze sculptures that represent theological reflection on Mackenzie's feminist faith development. These sculptures go back to the idea of art as a sadhana or spiritual practice as she understood it in India. The first sculpture is entitled, "The Victim". At first glance, it is difficult to discern the shape or form of the sculpture. On closer inspection it is a figure of a woman holding herself in a crouching state. She is vulnerable, weak, fatigued, and shamed. It is a state in which many women find themselves. Either they are shamed by society or victimized sexually, verbally, or physically. This state of mind, body, and soul, may become a tragic state of catatonia. 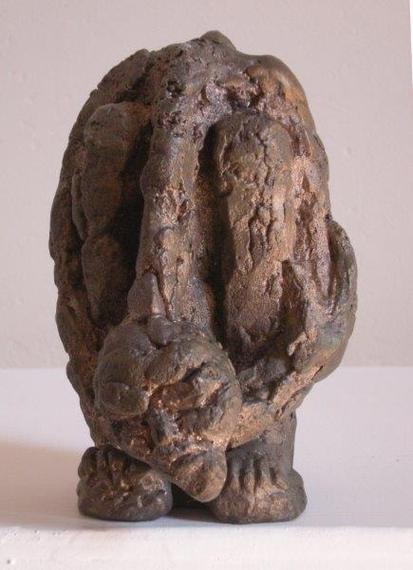 The second sculpture is "The Crucified Woman". In our Christian faith and art, we have many male images, most notably Christ, of crucifixion. But we need to keep in mind, that women and girls are symbolically crucified in many ways all over the world. They suffer under patriarchy and sexism. Women are raped, molested, and violently attacked. Women's crucifixions often go unnoticed within a patriarchal Christianity that genders God as male. 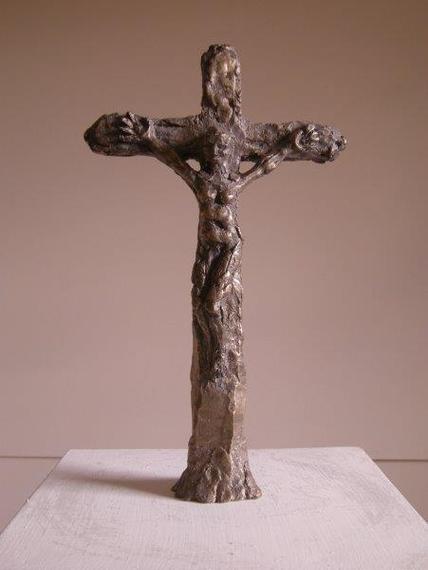 The third sculpture is "The Creator". Women have been creating, recreating, and giving birth since the beginning of time. Mackenzie emphasizes Proverbs 8:30, "I was beside him as a master craftsman and I was daily his delight, rejoicing always before him." The creative, creating feminine image of wisdom and Sophia needs to be retrieved within our Christian faith. We need to recognize the healing power in creating and being creators. Liberation and hope spring forth from creating. 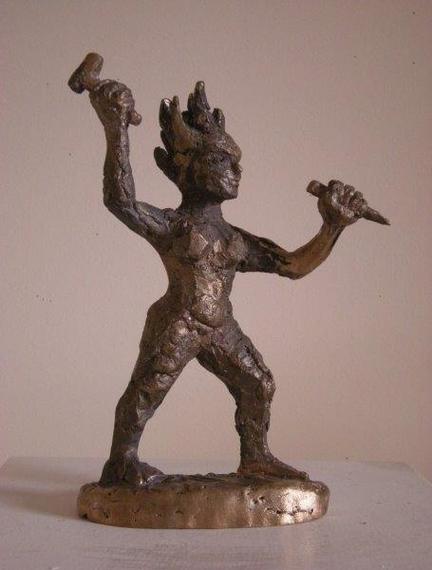 The fourth is called, "The Flourishing Woman". This sculpture has leaves that grow forth from the woman; these leaves are also flames. This symbolizes the woman like a tree planted beside the flowing waters. Psalm 1:3 speaks of such a tree that flourishes in good times and bad because the roots are near the water: "Blessed is anyone who rejects the advice of the wicked and does not take a stand in the path that sinners tread, nor a seat in the company of cynics, but who delights in the law of Yahweh and murmurs his law day and night. Such a one is like a tree planted near streams; it bears fruit in due season and its leaves never wither, and every project succeeds." The leaves are like the flames of Pentecost through which the Holy Spirit gives life, energy, power and hope to the people. Women, who are traditionally wounded, crucified and exiled, are given hope as they are reminded that they can flourish and bring forth creation. 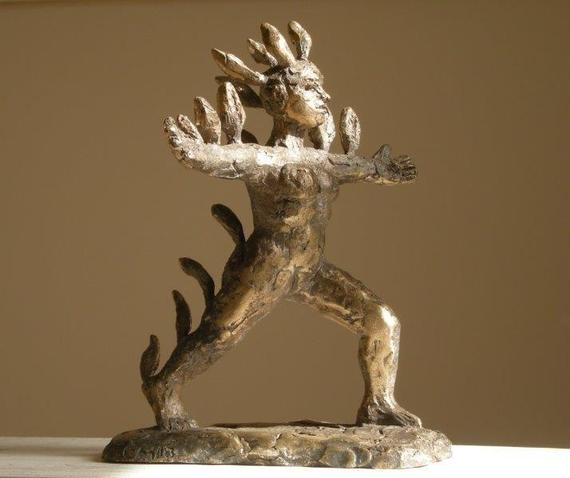 Together, these four sculptures express hope and transformation for women in the church. Women who are marginalized, subordinated, and victimized, can find power and empowerment in God. The good news can transform women into living, creating and powerful beings. Thanks be to God for artists who, by God's grace, proclaim this good news.