We Americans have a long history of standing by our products.

We dumped British tea into Boston Harbor, not only to famously oppose taxation, but also as a rejection of British products in order to support a domestic economy. During the Great Depression, publishing-giant Hearst's 26 newspapers sponsored a large-scale buy-American campaign. And in the 1970s, the International Ladies' Garment Workers Union ran kitschy advertisements asking consumers to look for "Made in USA" labels.

Since 9/11, the "Buy American" movement has experienced a bit of a renaissance, piggy-backing on the patriotic sentiment that resurfaced as a result of that fateful day. Nearly 10 years later, though, the Federal Trade Commission has come under intense pressure to make good on the fervor, by trying to enforce their rule that "all or virtually all" of a product must be of U.S. origin for that product to be labeled "Made in USA."

It's a pretty steep requirement -- too steep, in fact -- that means all significant parts, processing and labor that go into a product must be homegrown in order to receive the denotation.

Considering some 60 percent of the value of goods sold in the U.S. is imported, the stringent "Buy American" rules are too much for still-recovering companies to live up to in this increasingly globalized economy.

If the second coming of the "Made in America" movement had a hero, it would probably look a lot like Garry Ridge, who famously rode on horseback wearing a coat of armor through Times Square to ring the NASDAQ bell (seriously). He's the proud, quirky CEO of WD-40, one of America's most recognizable brands. And he's not even American.

WD-40's headquarters are still in San Diego, where the company was founded in 1953. "Half of what we make for the world is made right here, and all that you buy today in the US is made here, and everything that you buy in China is made here," said Ridge.

Despite its location, he doesn't see the company as exclusively American. Yes, he said, it feels like a quintessentially American brand when he is in the U.S., but he added, "If you were in my home country of Australia or in the UK you would think it's a brand of that country, because we're a global product."

For many companies, including WD-40, manufacturing their products from start-to-finish in the U.S., and using American ingredients, just doesn't make financial sense.

Take Subway, for example. The sandwich hegemon is a classic tale of the American Dream. Fred DeLuca founded the first store in 1965 when he was just a teenager, with $1,000 in seed money borrowed from a family friend. Today, Subway is the largest sandwich franchise in the world, with 34,000 locations in 94 countries and sales of more than $13 billion in 2009 alone. 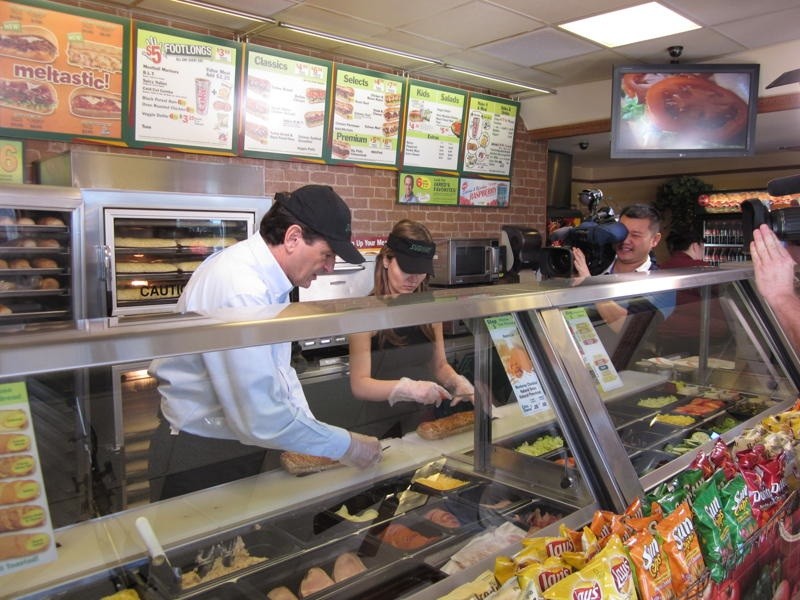 And yet, when asked if he feels that large corporations like his have a responsibility during these tough economic times to buy American to create more American jobs, DeLuca's answer was clear: "Actually, no, I don't. I think that everybody has to earn the business," he said..

Subway is exemplary of the new version of the "Buy American" movement, in which multinationals contribute segments of their business and profits to the American economy while still thriving overseas. If you go into any Subway in America, more than 90 percent of the food ingredients, furniture and equipment in the company's U.S. stores are made in America, according to DeLuca.

The company continues to use American products in the early stages of setting up franchises in other countries, too, "because we have no scale in any other market," DeLuca says. But as the franchise develops over time, and shipping and assembling costs for U.S.-made products come into play, the company does whatever is best for the franchise.

"So if the best thing is to continue to bring products in from the U.S., we do that. But, if it's a wiser idea to make it locally in the UK or India, let's say -- we do that," he said.

It's corporate Darwinism for him -- survival of the fittest manufacturer and supplier, despite country of origin. "I don't really think it's important to just say 'Buy American' for the sake of buying American," DeLuca says.

Strict "Made in USA" proponents, like Andrew Liveris, chairman and CEO of Dow Chemical, argue that the only way to create American jobs and maintain a skilled workforce is to keep all manufacturing in the U.S. In his recent book, Make it in America, Liveris calls for a national strategy to revive American manufacturing. American workers will only be able to keep making high-quality, cutting-edge products that the likes of Subway will buy, he says, if domestic research and development is all homegrown. That way, he argues, U.S. manufacturers will eventually be able to keep pace with the rest of the world, namely China and Japan.

But, as global business always is, it's complicated.

Peter Morici, noted economist and professor at the R.H. Smith School of Business at the University of Maryland, said that even within a specific category or price-point within a given industry, the ability to be "Made in USA" might be possible for some segments of a company, but not others. As a result, remaining a truly American brand often means sacrificing segments of the market.

Take apparel, for instance. Morici says that this is an industry for which complete U.S. make and origin just isn't feasible. While high-end clothing can still be made in the U.S. -- say, a $1,500 to $7,500 outfit or suit -- the derivative labels which make up the bridge collections in high end stores, and the bulk of the retail in middle range stores, can't compete without assembly in Asia. There simply isn't enough revenue coming in to support the manufacturing costs of being made in America just yet.

Ultimately, most American consumers buy what they like anyway, choosing products based on price and quality before country of origin. "There is some more sympathy these days than ten years ago, but even labor unions buy imported computers," Morici said. "Americans buy on price."

The "Made in USA" label is actually most powerful in foreign markets, where eager consumers purchase American goods for both their quality and cultural cache.

"'Made in America' is red hot overseas," said Karen Mills, Administrator of the Small Business Association. "It's a brand that people are really buying."

American products are successful abroad because so many of them have worldwide acceptance, said Fred Hochberg, President of the Export-Import Bank of the United States. When consumers abroad buy U.S. goods, they know what they're getting.

He described a recent visit to China, where he observed the abundance of Chinese-made products "with somebody else's label on them." Domestic products in other countries might be numerous, he said, but none of them have the same worldwide acceptance as, say, WD-40.

Ridge agrees: the "Made in USA" label is key to worldwide recognition, and to ensure consumers that no matter where they buy it, it's the same tried-and-true product that they're paying for.

Back home, though, Ridge said, the "Buy American" movement might actually be hurting the U.S. economy by stunting innovation.

"We need to be the best we can be, to be the most competitive we can be," he said. A protectionist market will only slow progress in the long run, which could result in the U.S. economy falling farther behind, he said. Or, put another way: "Do we need someone to protect us against people that show more entrepreneurship than we do?"

Some manufacturers are pushing back against the strict "Made in USA" rules by using an "Assembled in America" or "American Made" label instead, to demonstrate that the final product is, indeed, partially made in the United States.

Before the label rebellion gets to Boston Tea Party proportions, the FTC's "all or virtually all" clause must be broadened. We should not deprive companies whose products are made mostly in the U.S., but not entirely, from touting the credit they deserve to consumers at home and abroad. Even if a product is "kinda" made in America, it can still have a major impact on the U.S. economy in terms of growth, innovation and the domestic job creation we so badly need during this phase of our economic recovery.

We should stand by those products and give them the label they deserve. Major multinational companies may not be manufacturing their goods entirely in the U.S., but the jobs and revenue they create for the U.S. will make or break this country. And, if we don't stand by them, it will most likely be the latter.