Child psychoanalysis is rarely portrayed in the media -- maybe never -- and certainly never so well as on this season's Madmen. Sally Draper was acting out in all sorts of ways that made others uncomfortable, and finally, her parents took her to a child psychoanalyst, Dr. Edna, who is seeing her four times a week. Sally is the ideal psychoanalytic patient -- her problems are about internal conflicts, feelings too intense for her to modulate, and a poignant family situation requiring precocious self-understanding and maturity to navigate.

She's been absent for a couple of episodes, but shows up with a great flourish in season 4 episode 9, which aired Sunday, September 19. The only direct reference to her treatment is the wry explanation for her impulsive running away by train to see her father -- the psychiatrist said she needed to take more responsibility for herself. 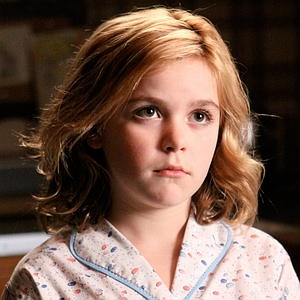 Sally has run to her father because she hates living with her mother, who has convinced us viewers as well of her coldness, lack of empathy, ragefulness and rigidity. Don's a nut but he's got more warmth and flexibility. We could get distracted by the obvious oedipal theme -- she so wants to be her Dad's girl, and is vigilant about her perceived rivals -- but that's not where the money is for this girl. If wanting to replace her mother in her father's affections is all she had going on, she'd be one lucky girl. Sadly, she's instead trying to grow up in an emotionally bewildering and often hostile and neglectful environment.

So Sally makes this bold move, which is obviously going to be seen as crazy and defiant by the adults around her, but we can easily see she's so much better -- her psychoanalytic treatment is obviously working, in just the way it actually does in real life. Gone is the childish lisp and the quality of weirdness and withdrawal. She speaks her mind, fights for herself, and seems sharper and smarter. From an objective, behavioral point of view one could mistakenly think she's worse -- more out of control (as her mother sees her). But she's more inside herself, and her mind and heart are working together more crisply and effectively than ever before.

I am an adult psychoanalyst, and have never treated children. I never wanted to precisely because of what I imagine is going to happen next to Sally. Betty Draper, enraged and humiliated by her daughter's behavior and indifferent or oblivious to the evident enhancement of Sally's core self, will blame the treatment or the analyst and claim it is just making Sally worse. Sometimes people recovering from depression, or consolidating an authentic identity are quite difficult for those around them. Sometimes the family system needs to keep the member known as the "identified patient" sick, so that others don't have to face their own problems. Betty might pull Sally out of treatment at this point. It would be like stomping on a new tender green shoot. I could never stand that, because I always fall in love with these kids fighting for their psychological lives.

The uncanny psychological preciseness of the show's creators continues to astound me, and it's nothing short of a miracle that they can capture the progress of an analytic treatment so well. For a psychoanalyst who works very hard to explain our arcane field and its extraordinary value to non-analysts I can only continue to marvel and say thanks.

Consultant on the Psychology of Business, Psychiatrist and Psychoanalyst