Back in May, when Gov. Bruce Rauner said he'd endure a government shutdown if the Legislature refused to pass his reform agenda, I wrote that I believed Rauner was overplaying the hand voters dealt him in the election. (That post is here.)

Rather than viewing Rauner's victory in November as an overwhelming endorsement by the electorate of Rauner's big-picture political philosophy, I saw it more as voters reluctantly trying something different after 12 years of failure in Springfield.

Rauner won with 50.3 percent of the vote to Pat Quinn's 46.3. A solid victory, but hardly a landslide when compared with other recent results. More importantly, 66.7 percent of voters had answered yes to an advisory question on immediately raising the minimum wage to $10 an hour while 63.6 percent gave thumbs-up to a question about a 3-percent additional income tax on incomes greater than $1 million. There's probably no greater rejection of Rauner's core political beliefs than voters' overwhelming approval of those proposals.

Last week House Speaker Michael Madigan, the man responsible for putting those questions on the November ballot, went a step further. Speaking to Statehouse reporter Jordan Abudayyeh of Springfield ABC affiliate WICS Newschannel 20, Madigan said he saw the election results not as a Rauner victory but as a Quinn loss.

In his explanation, he says out loud what any sentient observer of the Capitol knew a year ago. The minimum wage question was there to pull sympathetic voters to the polls who also would vote for Quinn.

Watch Madigan's explanation, and read the rest of the analysis, at Reboot Illinois. 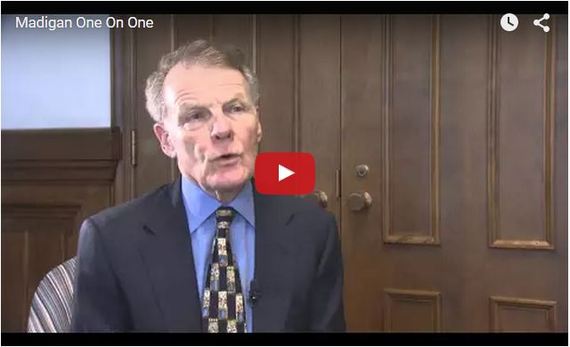 Madigan's remarks are in line with his relationship with the governor so far since Rauner's inauguration in January--mostly contentious. The back and forth continued this week when Madigan and Rauner disagreed over a bill passed in the Illinois Senate that would free up about $4.8 billion in federal money that has so far been tied up due to the state's budget stalemate. Check out Mark Fitton's description of the situation at Reboot Illinois.

NEXT ARTICLE: General Assembly prepares for vote on bill at center of Rauner, AFSCME feud