A mathematical circus has been touring the country and delighting ladies and gentlemen, boys and girls, with feats of mathematical computation, leaving them humored by unexpected mathematical results and surprised by mathematical ideas. From the streets of New York City during the World Science Festival Street Fair to the Discovery Center Museum in southern California, the Math Midway has gathered crowds to explore math with tiles in the shape of monkeys, a maze that has a complete route requiring only left turns, and a tricycle with square wheels that gives a smooth ride. 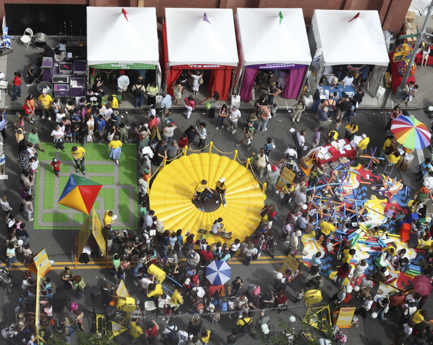 How can you catch the fun? Soon, you need only to plan a trip to New York City. On Dec. 15, 2012, the National Museum of Mathematics, affectionately referred to as MoMath (momath.org), will open to the public. The museum will be located at 11 East 26th Street, overlooking Madison Square Park, blocks away from the Empire State Building. If you want in early, go to openingceremony.momath.org for details on the Opening Ceremony on 12/12/12.

Like its traveling counterpart, MoMath's permanent site will offer hands-on, exploratory exhibits. The fun can start with the Museum's dynamic logo. Near the entrance to the museum, each visitor will be able to design his or her own personalized instance of the MoMath logo by varying the underlying repeated symbol and control parameters. Below are two logo symbols designed by Executive Director Glen Whitney and Associate Director Cindy Lawrence as they appear on their business cards. Glen used a parenthesis, Cindy a lambda:

Further in the museum, you will find a free-throw booth. Take a shot and soon, parameters such as the ball's velocity, angle of trajectory, and height of release will be displayed. Change gears and see how accurate can you be as a mathematical hoopster: Set an automated muzzle's velocity, angle of release, and height, then launch a basketball at a basket to see if your parameters are successful. 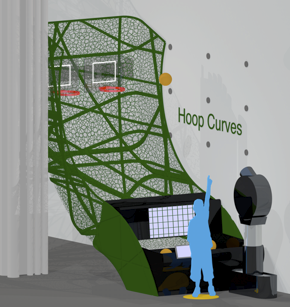 Elsewhere in the two-floor museum will be the Formula Morph exhibit, with three display screens. The screens on the left and right will contain surfaces, selected from a library of options and then tuned when the visitor turns a variety of knobs. The large central screen graphs a blend of the surfaces from its right and left. A lever enables a visitor to pick how much of each surface is morphed into the central image. When you create an image you like, you'll have the option to email the image as a digital keepsake! 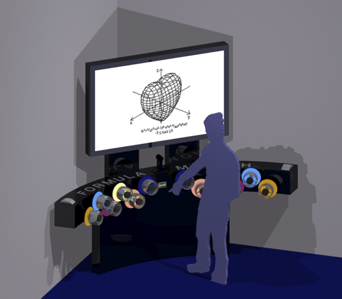 Anyone who has visited the Math Midway will be pleased to know that there will indeed be the square-wheeled trikes. How can a square-wheeled trike offer a smooth ride? The key lies in the humps on the roadway, which follow a mathematically determined curve. At first glance, this curve may appear parabolic -- a good guess, as even Galileo at one time thought such a curve, seen inverted in a hanging rope, was parabolic. It was proven in 1669, however, that such a curve, called a catenary, was not parabolic. On this roadway, the catenaries perfectly compensate for the movement of the square wheel. 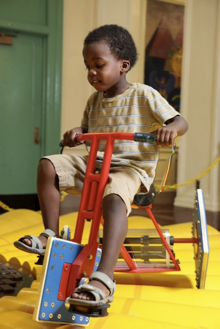 In only a few short months, visitors to New York City can enjoy the performing arts on Broadway, step into history on Ellis Island, and interact with the wonder and beauty of mathematics at MoMath. The Big Apple will be getting even tastier to residents and visitors alike.