My first love, John, and I weren't meant to be. Of course, I didn't know this at the time we were together. If I had, I never would have dated him. What can I say? I was blinded by college naiveté and his Buddy Holly glasses. But looking back, I should have known something was off. Why? Because he never liked Madonna.

Not that most straight men I know do like Madonna. They just don't seem to "get" the Material Girl and her resonance with modern women -- her mercurial style changes, her penchant for weird sexual power dynamics, and her shrewd, calculated business approach. But John was much more vehement in his distaste; he seemed to downright resent her, calling her nasty names and making ludicrous proclamations about her.

Whenever we'd "talk" about Madonna, we'd inevitably end up in a fight. Of course, I was twenty then and desperately in love for the first time, so love meant drama (underlined, italicized, with a capital D): roiling, over-the-top passion, fire, and . . . fighting. Lots and lots of drunken fighting, about the state of us, the world, other people -- and Madonna.

When I first met John, I was a college junior . My obsession with Her, on the other hand, began at age six, when I first saw her flounce onto MTV. As a burgeoning music junkie, I was into everything from Tears for Fears and Samantha Fox to Lisa Lisa and Cult Jam, but there was something about this twenty-six-year-old new girl on the block that hooked me in a different way. After hearing my very first Madonna song ("Borderline"), I became a bona fide wannabe. She was just so . . . cool. (And supposedly she had a genius IQ! Not only was she cool, she was smart as hell.) It was love.

I memorized every lyric to every song, and I used my friends' birthday parties as an excuse to dress like her. (I still can't believe my mom let me out of the house in some of those outfits: black lace headbands, fingerless gloves, mesh tank tops, neon socks; I was a full-fledged Madonna mini-me). My obsession faded a bit as I grew up and my musical tastes changed, but I continued to follow both her career and her personal life. I kept her in my back pocket like a little guardian angel, and I turned to her for hits of strength and inspiration when I needed them; she always delivered. Whenever I felt scared or anxious, I'd think, What would Madonna do? She handled life with such swagger and self-respect. There were insecurities in there somewhere (um, right?) but she never let on; no matter what the personal hurdle, she maintained a perpetual air of invincibility, and I admired her for it. Particularly in high school, when I found myself steeped in insecurity and adolescent longing, drawing little to no attention from decent guys. I constantly fought off feelings of inferiority because of my sheer lack of experience in the dude department. Like lots of teenage girls, I'd given the idea of romantic love too much weight, too much power (aren't American girls taught, even encouraged, to think this way?). By the time I hit college -- Madonna still in my back pocket -- I understood intellectually that a woman didn't require a romantic relationship to be happy, but I found it difficult to apply that notion to myself. I believed other women were fine on their own, that their single status indicated nothing lacking about them, but it was different when it came to me and my painfully single status. At best, I felt attractive but damaged; at worst, lost and unlovable.

And so it was that when I first saw John standing outside a bodega on St. Mark's Place one muggy summer night in New York City (I was there for a summer internship), I was ready. I'd waited a long time to fall in love. It was his Smiths T-shirt that first sold me -- a longtime lover of the Smiths and Morrissey, I had a weakness for fellow fans. They were usually like me: maybe a bit socially awkward, but also tender-hearted -- misanthropes who thought too much, analyzed everything, and wanted love but had absolutely no clue where to find it (or even how to flirt).

Something tugged me toward him. I liked him immediately -- his lankiness, his pasty blondness and his blue eyes behind black glasses. (I was pasty and blond and wore glasses, too.) I got his number and called him two days later. Within a few dates, I was falling for him; it was mutual and heady and beautiful. We looked like brother and sister, which felt somehow sick and sexy at the same time.

My memories of that first summer are vivid but spotty snapshots. I remember making fun of the way he organized his CDs -- they were all displayed face-out on his shelf, like he was showing them off. I remember the heavy, ornate bright-red door of his apartment building on St. Mark's. I remember the swelter and humidity, drops of sweat rolling down my chest, down my stomach, as we walked the streets hand in hand. I remember spending the night at his dark, cramped railroad apartment, how my hair would tangle up into crazy bed-headed knots overnight, and how in the morning I'd sit in front of him on the bed while he brushed the tangles from my hair, so gently I could have cried. I remember holding each other in bed one night when his face broke out in a sudden swath of giddy happiness, and he squeezed me and murmured, "you're mine." It felt innocent and perfect, like words I'd been waiting to hear all my life.

I didn't need my pocket Madonna then; she wasn't even the spark of a flashpoint in the new-couple bubble we inhabited. Instead, we were full to bursting with inside jokes and stupid pet names. At the end of the summer, I returned to college in Massachusetts. He stayed in New York, where he was raised, and we continued our relationship long-distance.

But things changed, as they tend to do. The fighting started. It would usually happen when we drank together (which happened frequently during our monthly visits -- we were in college, remember?). Like I mentioned, I'd watched one too many arty foreign films, and I thought real love meant constant turmoil. So I picked fights. About everything. I was young and dramatic, craving -- no, demanding -- more reassurance than one person could ever be reasonably expected to give me. But in those fights, I learned some things. Things about John, things about me, things that weren't that pretty.

I began to glean that beneath his goofy Morrissey-loving shell there was a darker John -- insensitive, intolerant, possibly even bigoted. I learned this when he began to mock the riot grrrl music I loved as "bratty chatter." When he said that every nail-salon owner was an aging Korean woman who couldn't speak English. (Yes, we once fought about nail salons.) When he described, during our eventual breakup phone-call, "not knowing how to tell his girlfriend" -- um, me -- "that her butt was getting big." (Those times he read my diary, went through my computer files, and hid my makeup from me didn't help, either.)

But oddly, I learned about our differences most glaringly from John's outright, unabashed loathing for Madonna. We probably fought about her more than anything else -- more than about our own relationship, even. I'm not sure why, but there was something about the venom he reserved for her, his cruelty in dissecting what he perceived as her "slut factor." In saying she set feminism back hundreds of years (which he enjoyed saying often), he was dismissing everything I loved and admired most about her: not just her sexual agency, but her ballsiness, her self-possession, her boundary-pushing, and her never, ever giving a crap what anyone thought of her. She was the golden rebel-girl icon of my childhood, a shining example of everything I wasn't (yet), but wanted to be. Seeing her do all the things she did (strike a pose, lash a whip, wear corsets and collars and bustiers -- oh my! -- change her hair color, publish books, have babies, find God) showed me that if I wanted to, I could do those things. Watching her live without shame allowed me to believe that I, too, could live without shame.

John's rejection of Madonna felt much deeper than just some petty distaste for a pop star. OK, I might have been a smidge biased -- she had been my idol. But his perspective on Madonna felt like nothing short of derision -- for her, for me, for women as a whole. His inability to accept Madge for all the complicated intricacies of who she was indicated that when it came down to it, he couldn't accept me, either (hello, big-butt comment). And it did us in, just shy of a year together.

Now it's been thirteen years, and I can't lie -- I still feel a twinge when I think of him. It's probably just rose-tinted memories of our early days, getting sweetened by time; that impossible nostalgia many of us inadvertently hold onto for the intensity of our first loves (which may have been all wrong, but felt so Big, so Irreplaceable). I don't think John and I should have ended up together, and I don't envy the woman he's married to now. In fact, it was just last year that I realized the full extent of his issues (I found, buried in my Gmail archives, a paper he'd written that asserted his strident belief that the Holocaust never happened). But the early days of our relationship were some of the happiest times of my life. For an anti-Semitic Madonna-hater, he sure had a hold on me.

I'm still single. And I still want a romantic relationship (I am human), while finally understanding, deep down, that it won't fix me or my struggles with depression and self-doubt. Now in my mid-thirties, I realize more than ever that I owe it to myself to practice patience. I owe it to myself to wait for someone who accepts me wholeheartedly no matter how I look; someone who looks at women's self-expression as just that -- not as "bratty chatter." And if I feel lonely during the wait, I can dig out the old Madonna in my pocket -- my childhood hero, my shining beacon. She may be a bit rumpled, a bit worn, but she still grins defiantly and reminds me "absolutely no regrets."

Were you a HUGE Madonna fan growing up? Perhaps even have a photo of yourself dressed as your idol? Send it to us at women@huffingtonpost.com, along with your first name, age, age in the photo and a caption, and we'll include it in our slideshow below!

This post is adapted from Madonna & Me: Women Writers on the Queen of Pop" (Soft Skull Press, March 2012).

Laura Barcella is the San Francisco-based editor of the new anthology "Madonna & Me: Women Writers on the Queen of Pop" (Soft Skull Press, March 2012). She's also the author of "The End: 50 Apocalyptic Visions from Pop Culture That You Should Know About...Before It's Too Late" (coming in July 2012 from Zest Books). Her freelance writing has appeared in more than 40 magazines, newspapers, and websites, including the Village Voice, the Chicago Sun-Times, Salon.com, Time Out New York, ELLEGirl, BUST and NYLON.

Madonna and Me: How the Queen of Pop Saved Me From Choosing the Wrong Guy
Madonnafied: Kids Dressed up as Madonna 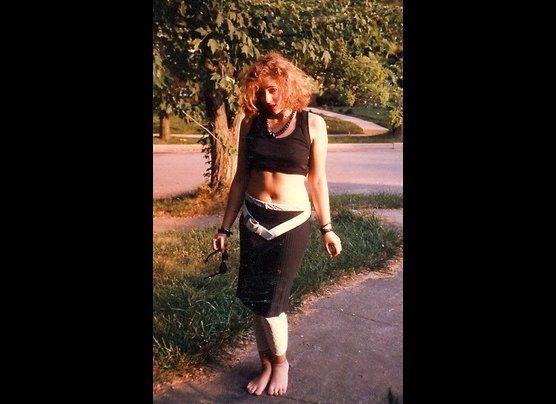 1 / 8
Heather, 1985
Heather Levin Greiner's nickname was "Madonna" back when this pic was taken outside Baltimore, MD. To see more Madonna dress up photos visit <a href="http://www.madonnaandmebook.com/madonnafied-kid-pix.html" target="_hplink">Madonnafied</a>.
Madonnafied