"I only attack causes that are victorious -- in some cases I wait until they are victorious," -- this is a quote from the last book written by philosopher Friedrich Nietzsche "Ecce Homo: How One Becomes What One Is". 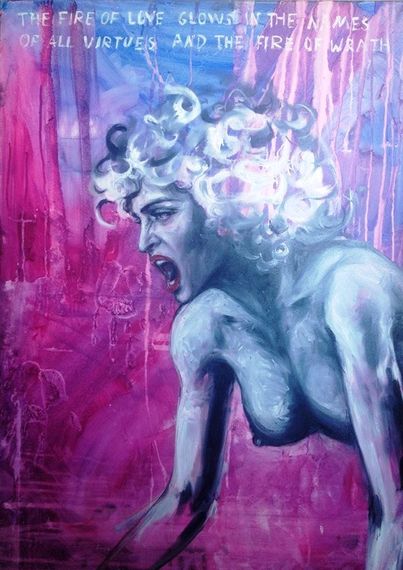 "The fire of love glows in the names of all the virtues, and the fire of wrath", "Thus spoke Zarathustra". Photo credit: Lena Hades

Latin words Ecce Homo means "Behold the Man", they were spoken by the Roman Prefect Pontius Pilate when Jesus is paraded in front of a hostile crowd in Jerusalem before his Crucifixion. The attack on causes that are victorious is a favorite activity of the pop singer Madonna, she becomes victorious always and everywhere.
Nietzsche who called himself "the last disciple of the philosopher Dionysus" admired the Greeks for making "the sexual symbol... the venerable symbol par excellence". If Nietzsche was alive he would have admired Madonna as one of the most powerful sexual symbols.

Nietzsche's idea of "the overman" (Übermensch) is one of the most significant concept in his philosophy. It has been translated as Overman, Overhuman, Beyond-man, Above-Human, Superman, and Super-human.
Zarathustra spends more time discussing the details of this striving than he does explaining what the Übermensch is. For example, this passage from Nietzsche's book Thus spoke Zarathustra sheds light on this concept: "A new pride my ego taught me, and this I teach men: no longer to bury one's head in the sand of heavenly things, but to bear it freely, an earthly head, which creates a meaning for the earth."
For me, this passage represents a basis to start questioning my own assumptions about "Super-human": "Behold, I teach you the Übermensch. The Übermensch is the meaning of the earth. Let your will say: the Übermensch shall be the meaning of the earth! I beseech you, my brothers, remain faithful to the earth, and do not believe those who speak to you of otherworldly hopes." Nietzsche wrote "I beseech you, my brothers, remain faithful to the earth", and I corrected him slightly "I beseech you, my brothers and my sisters, remain faithful to the earth."
According to Nietzsche, the super-human is a goal that humanity should strive for. The real super-human is the person who realizes his (her) full potential as a human being, and Madonna is like this. Especially if you consider that she is a woman, it means that she often encounters sexism in her business dealings with men, as all women do. So, considering all types of discrimination - sexism, ageism, racism etc, I think the Übermensch (or a super-human) is a woman, not a man, and one of these amazing super-humans is Madonna.