Madonna isn't afraid to show her support for President Barack Obama, nor is she afraid to paint it on her body.

On Thursday night while Obama delivered his nomination acceptance speech at the Democratic Convention in Charlotte, N.C., Madonna was busy performing as part of her "MDNA" tour at Yankee Stadium in New York City.

She clearly had the POTUS on her mind, however, and Madonna decided to show fans just how much she loves Mr. Obama.

"I've seen some scary things. I've seen people being locked up and put in jail for speaking their minds, for being gay, for not practicing the right religion, for not dressing the proper way," Madonna said to the crowd of 40,000, AOL music reported. "Yeah, it's scary. But what it made me realize is how lucky I am to be living here in America. It doesn't mean that this is the perfect country. We have a long way to go."

The 54-year-old then ripped off her shirt to reveal an "OBAMA" tattoo painted across her lower back.

Supermodel Hilary Rhoda was in the audience that night and posted a photo of Madonna's "OBAMA" body signage:

The singer has been supporting Obama since his first run in 2008. She even sold a T-shirt featuring a screen print of Obama's face in multicolors captioned with her hit song, "Express Yourself."

Madonna has been pushing for political freedom around the world, offering her support to Pussy Riot, the Russian feminist group sentenced to two years in prison for "hooliganism" after they performed an anti-Putin "punk prayer" in a Russian cathedral.

Pussy Riot members recently thanked Madonna and other artists for their support in a video posted online, according to the Guardian. In the video, they burn a portait of Vladimir Putin, who they say thinks it's "illegal to call yourself a feminist." 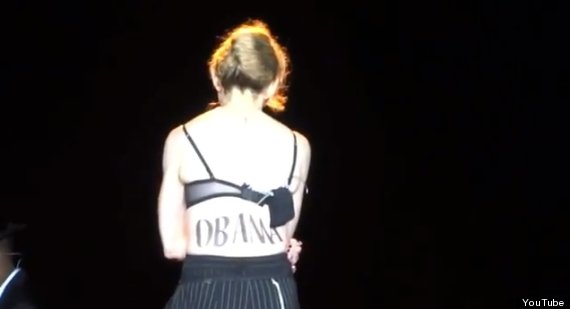