Madonna is not used to being rejected, so she was reportedly shocked when superstar producer Nile Rodgers didn't want to bed her back in the 1980s.

The funk legend revealed to The Sun that the Queen of Pop was irked he didn't proposition her while the two worked together on her chart-topping 1984 album, "Like A Virgin."

“I was standing at an elevator when she goes, ‘Why don’t you want to f**k me?’" Rodgers told The Sun about the alleged interaction. “I was like, ‘What did you just say to me?’ She was wondering why I had not propositioned her. She couldn’t understand that. It was like, ‘Everybody wants me.'"

“One time I slept with a really beautiful artist I was working with and it was a really wrong thing to do. So, I didn’t work like that," he added. “I grew as close to Madonna as I’ve ever been to a woman without being romantically involved."

Although things never got physical, the legendary funk musician, who is featured on Daft Punk's "Get Lucky," clearly made an impression on the pop superstar.

"He's a genius," Madonna told MTV before "Like A Virgin" hit stores. "As soon as we met, we hit it off really well. And we thought it would be a great union. ... We just have a really good chemistry. And he understands my musicality."

Shortly after the album debuted, Madonna met and married Sean Penn. She went on to have relationships with Warren Beatty, Vanilla Ice, Dennis Rodman, Carlos Leon, Guy Ritchie and A-Rod. She is currently dating Brahim Zaibat, a dancer 30 years her junior.

“I don’t want to live my life on my own,” she told ABC News last year. “I love being a mother. My children fill me up in many ways, and inspire me in many ways, but I need a partner in my life and I think most people feel that way. I’ve never really lived a conventional life, so I think it’s quite foolish for me or anyone else to start thinking that I am going to start making conventional choices.” 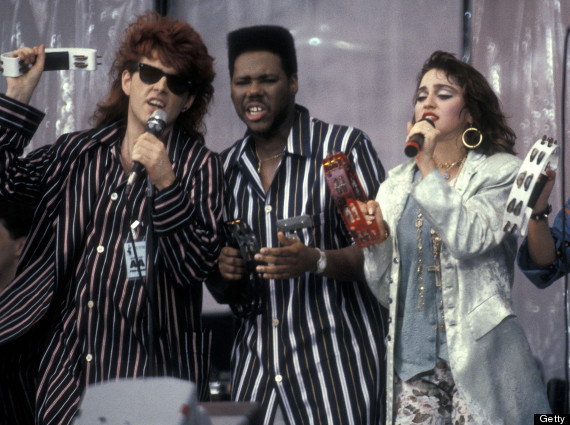 Nile Rodgers (C) and Madonna (R) perform at the Live Aid Concert to Raise Funds for the Ethiopian Famine Crisis on July 13, 1985, at the John F. Kennedy Stadium in Philadelphia.