Madonna may be "very upset" over the premature leak of a demo track from her forthcoming album, but the pop diva was all smiles as she held court Saturday night at New York's Roseland Ballroom, where she handpicked a new dancer for her next tour as part of the Smirnoff Nightlife Exchange Project.

The Material Girl made an appropriately regal entrance, rising from beneath the stage amid a dramatic flood of spotlights to the crowd's delight. Clad in a black Dolce & Gabbana bodysuit, white blouse and her now-trademark Miu Miu boots, she quickly made her way to an adjacent stage where daughter Lourdes Leon, boyfriend Brahim Zaibat, manager Guy Oseary, publicist Liz Rosenberg and a handful of choreographers all awaited her -- no hydrangeas in sight.

Though rumors circulated through the crowd that Madonna would offer up a sneak preview of her highly-anticipated album (set for a tentative spring release), there was no mention of her upcoming music or directorial feature, "W.E." Instead, she sipped champagne while lying on her stomach atop a plush sofa as she watched the 11 uber-talented dancers bump, grind and strike gravity-defying poses in pursuit of the coveted tour spot. In the scope of Madonna-ology, it was a playful, at ease moment -- the type of which Madge hasn't displayed much of since 1991's "Truth or Dare."

At the competition's finale, Tennessee-born Lil Buck was selected by Madonna and her choreographers as the winner. "This has been an incredible journey and a dream come true," the Memphis native gushed in response. Having earlier described dancing in New York City as "my idea of a perfect evening," Madonna quickly made good on her word, inviting her new dancer to join her posse in the ballroom's VIP section for a group boogie.

Though much of the celeb-studded throng (which included singer Natasha Beddingfield, "Project Runway" designer Christian Siriano, drag queen Lady Bunny and transgender icon Amanda Lepore) left after the contest ended, those who did stick around got another surprise treat, as Madonna later shimmied her way into Martin Solveig's DJ booth, singing along as Solveig played her 2005 hit, "Hung Up," and mimicking the disco-like moves straight from the song's video. As it turns out, the leak of "Give Me All Your Love" wasn't too far from her mind -- before departing, she called out "L-U-V" from the song's cheerleader-like chorus (the response: a thunderous "Madonna!")

View photos from Madonna at the Sminoff Nightlife Exchange Project below: 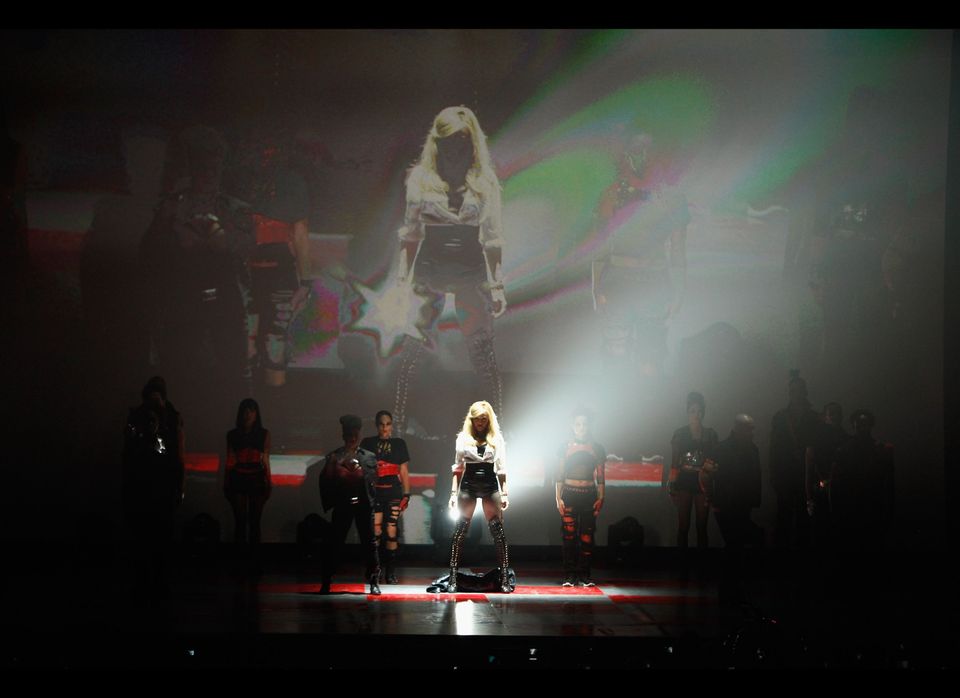 1 / 16
The Queen of Pop made an appropriately regal entrance at the event.
Brian Ach/WireImage for Smirnoff