Madonna has made ample use of her back during her ongoing MDNA Tour, having adorned herself with both "OBAMA" and "PUSSY RIOT" during separate shows. The body art is revealed through a striptease that comes during every stop of the tour.

At a concert in Los Angeles last week, Madonna paused to reflect on a "serious" moment. "This made me cry," Madonna said, according to The Hollywood Reporter. "The 14-year-old schoolgirl who wrote a blog about going to school. The Taliban stopped her bus and shot her. Do you realize how sick that is?" 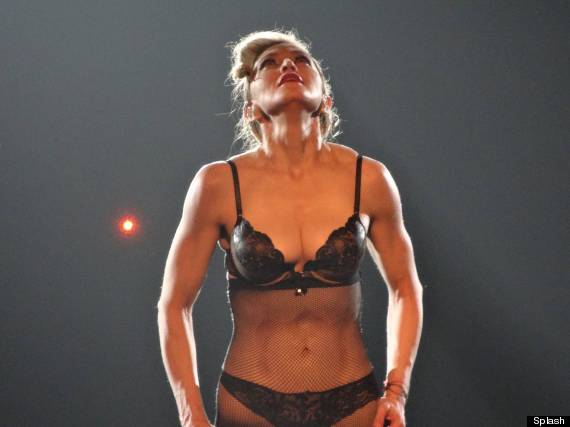 When it was time for the nightly striptease, Madonna revealed a new "tattoo": "MALALA."

Malala Yousafzai is a 14-year-old Pakistani girl who was shot in the head by Taliban gunmen. The young activist, known for campaigning for girls' rights to education, was transferred to the U.K. for treatment. She remains in a coma.

Former U.K. Prime Minister Gordon Brown has blogged extensively about Yousafzai on The Huffington Post, arguing that the attack on the young woman should serve as a global wake-up call to "the gap between the promise of opportunity for all and the reality of millions of boys and girls shut out from even the most basic of primary schooling."

Brown is the U.N. Special Envoy for Global Education. His office is asking individuals to sign the I Am Malala pledge.

The Taliban has vowed to kill Yousafzai if she survives the initial attack. More than 50 Islamic scholars have condemned the Taliban's actions.

Madonna's concert was attended by Jessica Alba, Heidi Klum, Neil Patrick Harris and other celebrities. For more, head over to The Hollywood Reporter.