Madonna's sophomore directorial offering, W.E., might not have Hollywood in a complete frenzy, but it most definitely has the fashion world clamoring and bracing itself for a revival of classic and elegant heritage luxury brands such as Vionnet and MAINBOCHER.

A dear friend and fashion editor recently returned from an extended trip to Europe where she had the opportunity to see Madonna's film W.E., based on the love affair of Wallis Simpson and Prince Edward VIII at the Venice Film Festival (U.S. release Dec. 9, 2011). I had been waiting with baited breath for her personal review, but she got sidetracked with her return by Milan and Paris fashion weeks. But she too, could not wait to inform me in her thick Italian accent, "Madonna's film is a visual and stylistic masterpiece, darrrrllllling." She described in great detail every pin-tuck, corset, pencil skirt and shade of Wallis blue she witnessed dance across the screen. When I interrupted to ask, "But how was the film?" She quickly fanned the question away, and went straight back into her rant of "deep red lips, Vionnet, elegance, a return, pleated bodices, and Mainbocher."

As a designer, from the second I heard Madonna was interested in making a film about Wallis Simpson, I knew she would spend a great deal of time making sure the fashion in the film was an integral part of her storytelling. And sure enough, by all accounts, from festivals in Venice to Toronto -- everyone agrees -- the movie will definitely herald a turning point in the direction of fashion and it's relationship with film.

From the newly released trailer to the production photos, one can see Madonna and her long time style collaborator, Arianne Phillips, have paid close attention to the strict and rigid, yet romantic style of Wallis Simpson. Madonna's Wallis Simpson somehow seems much softer and fluid from the morsels of information I have been able to gather. By all accounts, there is something endearing about the tragically flawed and vulnerable Wallis Simpson played by actress Andrea Riseborough and directed by Madonna. There is something extremely unique about capturing these qualities in a single character, a uniqueness I think will be of great credit to Ms. Ciccone's vision as a director and also Ms. Phillip's creativity as a costume designer.

I am also informed that Mrs. Simpson's plutonic love affair with the American born designer, Mainbocher, is definitely present in every frame. I don't think there has ever been a greater love story between designer and muse outside that of Audrey Hepburn and Givenchy. But I believe what separates the Mainbocher and Wallis Simpson love affair is that their union is rooted deeply in American sportswear and sensibility.

Whenever a story is told about the Duke and Duchess of Windsor or their sensationalized love affair, it is virtually impossible to separate them from their iconic wedding photo. Wallis Simpson dressed in the most elegant Mainbocher wedding gown, standing proudly next to the man that had just abdicated the throne of England to spend the rest of his life with the woman he loves. It's enough to make Mister GoLightly weep from the very thought of it -- L'amour, L'amour, L'amour...

Madonna wearing "Vionnet" on the red carpet at the Venice Film Festival.

However, in Madonna's version of events the recently relaunched house of Vionnet plays a much larger role in the film. The fashion was such a huge part of the film that Harvey Nichols in London recently held an in-house installation of recreated archival pieces by the famed French designer, Madeline Vionnet. In a recent interview with British Vogue, Vionnet's current president, Matteo Marzotto said, "The film W.E. gave Vionnet such a wonderful opportunity to showcase the exquisite craftsmanship and skill of the house. We were thrilled to be considered for the project and it was so exciting to be part of such a lavish production that portrayed one of history's most intriguing women."

With all the renewed interest in these classic heritage brands and the successful relaunch of Vionnet (currently sold in over 200 stores worldwide), it is no wonder the fashion rumor mill is churning about the revitalizing of the ultimate style sleeping beauty -- MAINBOCHER. With all the amazing talent floating around these days one must wonder who they will put at the helm of this classic and prestigious brand (wink-wink). Who knows, maybe if Madonna continues her love affair -- borderline obsession -- with Wallis Simpson and Mainbocher, we could see her funding or even co-designing the collection? We must remember that one of Madonna's most iconic fashion moments was her recreation of the Mainbocher Corset with famed photographer, Horst. Who knows anything in this crazy world of fashion these days? But thanks to the Material Girl there is one thing we know for sure -- the world is about to get a lot more elegant, sophisticated and yes -- very, very romantic. 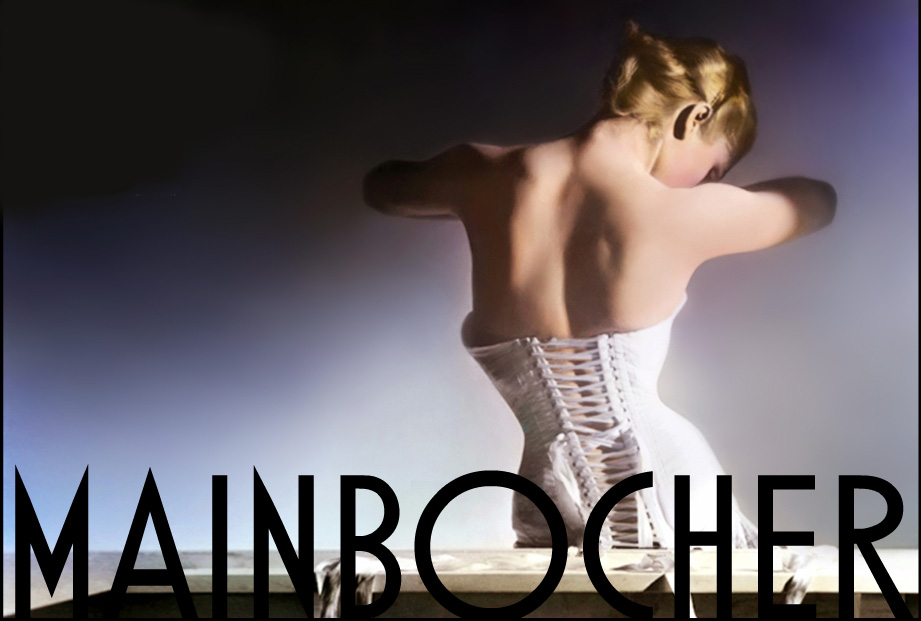