In today's rendition of "proof that kids are carbon copies of their parents," Madonna took her eldest Lourdes, 16, along with Rocco, 12, David Banda, 8, and Mercy James, 8, to Malawai. Maybe we just haven't seen Lourdes in a while but boy, is she a spitting image of her mother or what?!

Madge, 54, took her kids to visit Mkoko Primary School, one of the schools her charity "Raising Malawi" built with BuildOn, an organization in the region of Kasungu in the center of the country. According to the AP, the five also visited Hope orphanage, where the pop star adopted David. There, hundreds of orphans "welcomed them with song and dance."

"I'm happy that David is back to see his brothers and sisters," said Madonna.

Befitting her surroundings, the usually put-together singer skipped the makeup and slipped on relaxed, light-colored clothes, flats, a big scarf and a big hat. The clean face totally helps emphasize how similar Lourdes' features are to her famous mother's. 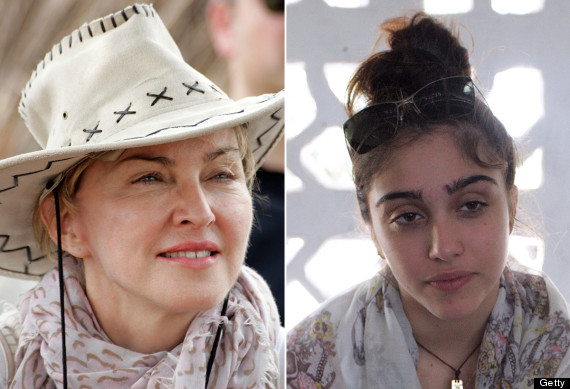