March 12, 2015, will be a day that goes down in history for animal lovers in Madrid! The Madrid Assembly passed a bill banning the "slaughter of stray animals." This new law will make abandonment and euthanasia of homeless dogs illegal in Spain's capital. 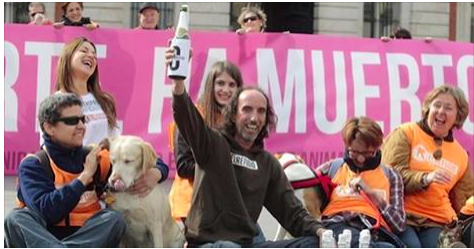 The law came into effect after El Refugio, a Spanish animal rescue and advocacy group, brought it to the public's attention. The demand to pass the bill become so high that groups of all parties came together in a unanimous decision.

"Today is one of the happiest days of our lives," said El Refugio's president, Nacho Paunero. "[Our organization] has been fighting for 19 years to make Madrid and the surrounding areas no-kill. We said we would never stop fighting until accomplishing our goal and we have finally done it!"

The slogan "La Muerte Ha Muerto" ("Death Is Dead") was spoken and celebrated around the large city after locals, members and volunteers signed the petitions. The efforts of this amazing rescue have done so much for animals in the city of Madrid! Hopefully other cities will soon follow behind!