In 1963, Sergio Aragonés published his debut comic in MAD Magazine: "A MAD Look At The US Space Effort," which spoofed the space race craze, while also capturing what would become the artist's trademark style of relating everyday people and common situations through goofy humor. Since then, Aragonés has produced thousands of drawings for MAD and has become one of America's most revered cartoonists. The artist has won numerous awards, including the National Cartoonist Society's Reuben Award, the Will Eisner Hall of Fame Award and the Comic Art Professional Society's Sergio Award, an award named in his honor, and the new book, "MAD's Greatest Artists: Sergio Aragonés: Five Decades of His Finest Works" has become the first comprehensive retrospective of his work. He spoke to The Huffington Post last week -- scroll down for a slide show of Aragonés's comics.

HuffPost: Tell me a little about the book. How did you go about choosing which cartoons to include?

It was going to be very difficult because there were so many. The cartoons are like a son -- I couldn't choose or say yes to this one or that one ...

Would you say you're equally as proud of each cartoon, then?

Of course, of course. If you look at it, it looks like one book, but its really months and months of research and lots of working that goes into the material. Every joke is hours of thinking -- I'm proud of all of them!

Half of the day is thinking of jokes and the other half is drawing them. I sit with a piece of paper and start thinking and drawing. So, when people ask, 'Do I get writers block?' I say 'no'! I just say one word, like giraffe, and I start drawing little things until I find something silly.

How do you develop THE SHADOW KNOWS features?

In the beginning, I was doing a couple of things. I was trying to make a regular joke. Then, the shadow would be what he was really thinking. It's storytelling. With a shadow, it's a great solution for a pantomime.

If you were to draw a self-portrait in a THE SHADOW KNOWS feature, what would your shadow be doing?

There would be a big party and then my shadow would just be at the desk drawing a cartoon!

In many of your comics, you seem to delight in others' misery? Do you believe that to be true?

When they asked me to do a MAD look at racism, I said, 'WOW, that's a strong one.' But, would you want to do it? Well, of course. Now, you are making fun of things that are not funny. Those are a challenge for me.

I'm always surprised by how funny your cartoons are when I re-read them ...

Thank you. I see something I drew 40 years ago and I don't remember it -- it's like someone told me a new cartoon!

This interview has been excerpted and edited from its entirety to appear on this page. "MAD's Greatest Artists: Sergio Aragones: Five Decades of His Finest Works" by Sergio Aragonés is available now from Running Press. 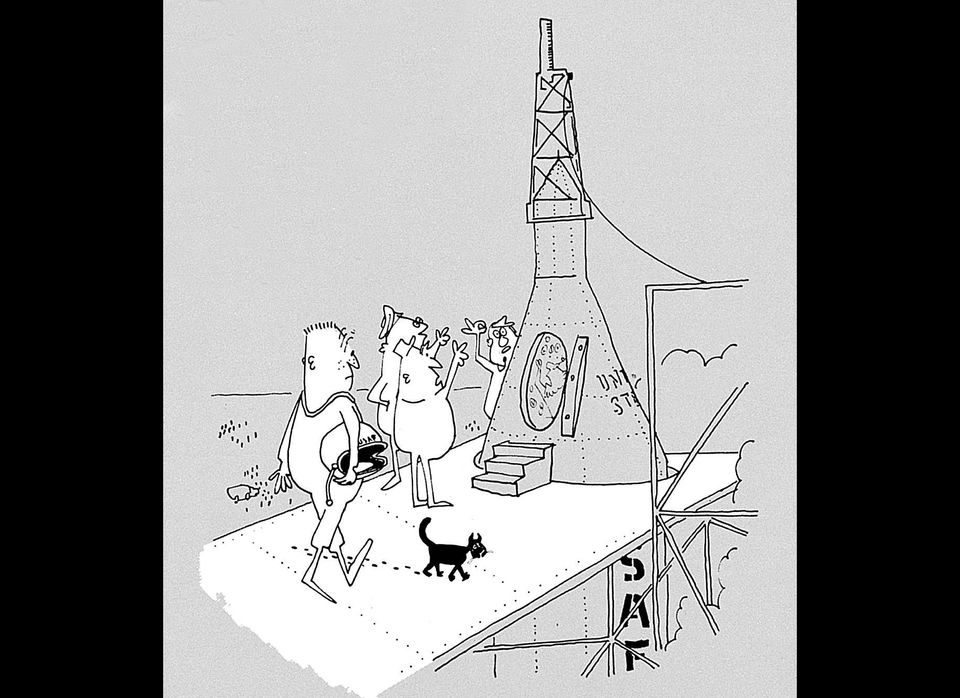