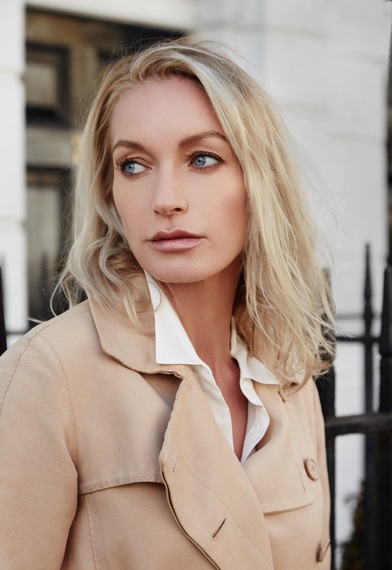 L.S. Hilton grew up in England and has lived in Key West, New York City, Paris and Milan. After graduating from Oxford, she studied art history in Paris and Florence. She has worked as a journalist, art critic, and broadcaster.

Her debut novel and the first in a trilogy, Maestra, is a psychological thriller about Judith Rashleigh, an assistant at a London art gallery. By night, she's a hostess at a champagne bar and is familiar with the ways of the wealthy. When she's fired from her art gallery job, she accompanies one of the champagne bar's biggest clients on a trip to the French Riviera. While there, a fatal accident befalls that client. For various reasons, Judith must assume a different identity, and she turns herself into an extraordinary femme fatale.

Judith Rashleigh is a fascinating character. Tell us a little about her.
She's ambitious and extremely independent, as well as quite funny and just slightly sociopathic [Laughter]. To me, she's a very modern young woman and totally unapologetic about her desires and ambitions. She's also unapologetic about her body. She tends to make some people very angry, which I suppose, is a good thing. I've been living with her for quite some time, and have become very fond of her. She's become a slightly strange friend of mine.

Maestra's descriptions of the glossy, sleek life of the super-rich are fabulous. Are they based on your own experiences?
I wish they were. [Laughter]. When I wrote the book, I had in mind the sort of books I liked reading when on holidays. I would call them sunburn books--the kind where you tell yourself, 'I'll read one more page before I leave the beach' and before you know it, you've been sunburned.

As an adolescent, I really loved the 70s and 80s blockbusters which were often about pleasure and fun. They took me to different worlds. So, I wanted to write something that would transport the reader to a very different and glamorous world. The exotic locations in the novel enhance that experience.

Judith seems to be a morally complex 'anti-heroine.' Do you agree with that?
I do. In many ways, she is an anti-heroine. At times, she can be quite nasty. The challenge for me was to make the reader stay with and root for her, even though she's horrible in certain respects. She's not a typical heroine in the way she makes her way through the world. But I hope readers will find her a sympathetic character. She's capable of friendship; has a good sense of humor; has a strong sense of fair play; and most importantly, doesn't take herself too seriously.

She's also been described as reminiscent of Lisbeth Salander from The Girl with the Dragon Tattoo. Do you feel that's accurate?
Actually, I don't, though I'm flattered by the comparison. Lisbeth Salander is motivated primarily by revenge. Lisbeth was also horribly traumatized as a young woman. And she's considerably more imaginative and violent than Judith.

Judith is certainly murderous when she needs to be, but she's practically minded. She doesn't kill unnecessarily. Both protagonists are complex and powerful, so in that sense, I can see the connection between them.

You're obviously comfortable with writing graphic scenes of sexual activity. Will you talk about that?
Yes, they are graphic. I think Judith is part of a sexually graphic generation--she's part of the 'hook-up' culture. I think the Internet has changed the way people interact socially and sexually. Like it or not, we've undergone another sexual revolution in the last ten years. People talk and think about sex differently now than before.

For me, the words Judith uses and the things she does are honest and feel modern to me. I describe them so graphically for two reasons: the first is I felt it was realistic for the character and consistent with her voice. These are the words she would use to describe sex. Second, it's a technically interesting challenge for a writer to describe sexuality in an effective way.

I don't know if you're aware of the British Bad Sex Award. It's an award given every year by The Literary Review to a literary novel which is spoiled by a sex scene. The award has been given to John Updike and Jonathan Littel, among other luminaries.

Judith assumes and sheds identities with ease, so I must ask if Maestra partly concerns questions about self-definition.
Yes, I think it very much concerns self-definition. It's about a woman who tries to do things the right way, but that doesn't quite work out for her. She realizes she's been reduced to a sex object, so she turns certain prejudices against the person with those pre-judgements. Her journey is very much towards self-definition. She's not actually interested in money or in living a luxurious lifestyle. She's intent on being free and living her life on her own terms. Her self-definition isn't found in material things. It's found in those things to which she has the most passionate emotional response; and those things involve beauty. She wants to live a gracious life amongst beautiful things.

I understand Sony's TriStar Pictures purchased the film rights. Who do you see playing Judith?
Of course, that won't be my decision. I would be interested in seeing an unknown actress playing the part. I think readers want to see the character, but not see a star playing her.

Two more books about Judith are coming. Where will her travels take her?
There's a clue in the first book about something quite unexpected happening in the second one. The second book has something to do with Caravaggio and features some Eastern European locations. The third goes back to Italy with certain characters reappearing. But Judith herself evolves over the course of the three books.

Congratulations on penning Maestra, the opening salvo of a trilogy about a ferocious heroine, a page-turning novel that's also been described as dipping into the same psychological waters as Patricia Highsmith's The Talented Mr. Ripley.