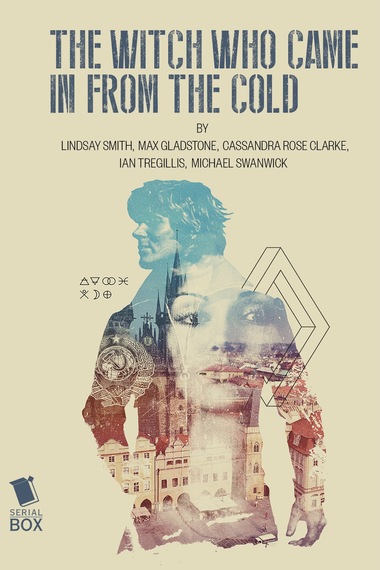 The Witch Who Came in From the Cold, the latest offering of serialized fiction from Serial Box, has a variety of magical ingredients working in its favor. First is the subject matter, which consists of magic and espionage amid the political tensions of 1970's Prague. Then there is the assemblage of A-list authors collaborating for the project: Lindsay Smith (Sekret), Max Gladstone (Last First Snow), Cassandra R. Clarke (Our Lady of the Ice), Ian Tregillis (Something More Than Night), and a guest appearance from Michael Swanwick (Chasing the Phoenix).

This review is of the first three episodes, and in these a world is being built up in its particular shades of character, spy maneuvers, and magical laws. The action begins immediately with a bit of misdirection: a pair of KGB agents, Tanya Morozova and her partner Nadia, are hunting a target on the streets of Prague. The reader's natural assumption is that the target is an enemy of the Soviet Union, but what soon becomes clear is that Tanya and Nadia play a dual role: they are not only agents of the KGB but also of Ice, an organization concerned with neutralizing destructive magic. Tanya will soon clash with Gabe Pritchard, a CIA agent who is experiencing some neutralizing influences of his own, in the form of agonizing headaches that clearly have their source in the supernatural. Gabe is thereby thrust against his will onto the battleground of the Ice and Flame operatives, who are striving to take control of the world's freely available magical forces. The ones left standing will be the ones to govern.

Witch is, in the first couple of episodes, a slow burn, even as there is a lot of action; the characters take time to reveal themselves. Eventually it becomes apparent that Tanya struggles to reconcile with her past, symbolized briefly by the spectre of her dead grandfather; while Gabe is a promising agent whose career has been distastrously derailed by the magic-induced headaches. That the Soviet struggles with her past and the American with his potential future seems appropriate to the mythologies surrounding their respective homelands, at least from a contemporary point of view: Tanya's political milieu is destined to collapse, while Gabe's brash Americanisms mark him from the outset. Even though he is a spy and therefore must harbor some elements of sophistication, he comes across as an average guy trying to do his job, unmercifully impeded by forces beyond his control.

Supporting characters such the bar owner Jordan Rhemes (who just might be a witch) and Gabe's closeted gay partner Joshua Toms provide additional character complexity. By the third episode all the characters had begun to blossom: they are most effectively showcased at a party, where the dialogue is free-flowing and the wit plentiful. Men in sharp suits and women in jewels present as elegant weapons that duel and preen. Wit, in particular, is of vital consequence in the realm of spies. Unsurprisingly it is Max Gladstone who wrote the third episode, bringing to it the crackling verve his readers have come to expect.

This is a sleek series, with clever prose that runs at a clip, from scenes in spy agencies to bars to action on the wintry streets of Prague. From what I could tell from the first three episodes, that action is just getting started, and more surprising developments lie in wait around the city's treacherous corners.

This review was reprinted with permission from Tor.com