The Afar Rift in Ethiopia is marked by enormous gashes that signal the breakup of the African continent and the beginnings of a new ocean basin, scientists think.

The fractures appear eerily similar to seafloor spreading centers, the volcanic ridges that mark the boundaries between two pieces of oceanic crust. Along the ridges, lava bubbles up and new crust is created, slowly widening the ocean basin.

But a look deep beneath the Afar Rift reveals the birth announcements may be premature. "It's not as close to fully formed seafloor spreading as we thought," said Kathy Whaler, a geophysicist at the University of Edinburgh in Scotland.

Whaler and her colleagues have spotted 120 cubic miles (500 cubic kilometers) of magma sitting in the mantle under the Afar Rift. Hot liquids like magma like to rise, so the discovery is a conundrum.

"We didn't expect this, because magma wants to pop up like a cork in water; it's too buoyant compared to the surrounding medium in the mantle," Whaler told LiveScience's OurAmazingPlanet.

Models predict that at spreading ridges, magma should sit just under the rifts, in the crust. That's what geoscientists see in the oceans, at places like the Mid-Atlantic Ridge and the Juan de Fuca Ridge. But not only is the giant pool at Afar extremely deep, but it is also mostly below the sleeping Badi volcano, many miles west of the scene of a 2005 series of underground magma intrusions, Whaler said.

"You just wouldn't expect to have a blob of magma still underneath this other area," Whaler said. "It's one of the things we're still having a lot of discussions about."

The findings, published Sept. 5 in the journal Nature Geoscience, add a new twist to the Afar Rift puzzle. Thanks to intense international attention — from scientists intrigued by the 2005 intrusions — the region is one of the best-studied spreading centers in the world. But a lively debate continues over whether the Afar Rift is a unique case or a textbook example of a fracturing continent.

The Afar region sits at the junction of three tectonic plates, all of which are spreading apart. Here, Earth's brittle crust fractures as the plates tear away from one another, but the mantle underneath adjusts by stretching like warm plastic. The mantle rocks rising beneath the thinning crust melt from lowered pressure, creating magma. [Infographic: Tallest Mountain to Deepest Ocean Trench] 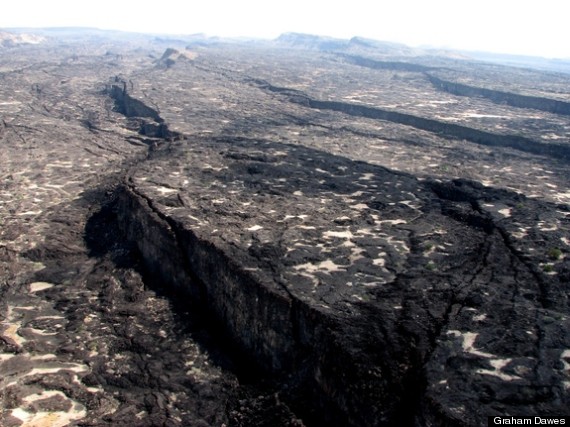 The Afar Rift in Ethiopia as seen from a helicopter.

In 2005, a series of earthquakes in Dabbahu, Ethiopia, announced the arrival of new magma squeezing into the crust. Vertical fingers of molten rock shot into underground fractures, 14 in all. The longest intrusion was about 26 feet (8 meters) wide and spread through 37 miles (60 km) of crust in just 10 days.

Whaler and her colleagues searched for the source of these vertical injections, called dikes, with instruments that measure changes in magnetic and electric fields in the Earth. Both are sensitive to underground liquids, which have a higher electrical conductivity than rock (meaning electrons have an easier time moving through them).

The team discovered the feeder for the magma intrusions: a shallow, small chamber directly under the dikes, about 4 miles (7 km) wide and 3 to 6 miles (5 to 10 km) below the surface. 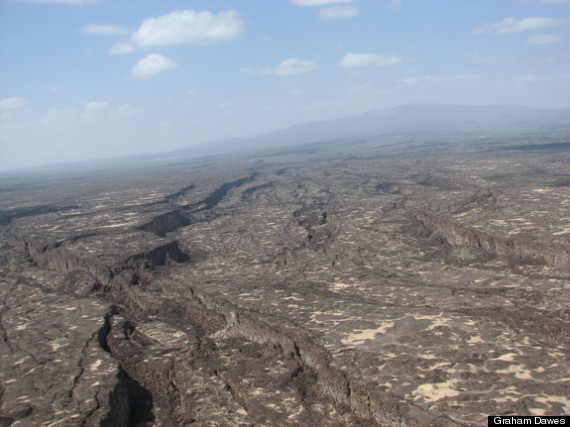 Fractures along the Afar Rift in Ethiopia resemble those at a mid-ocean ridge, where two pieces of oceanic crust spread apart.

But in the mantle, the layer beneath Earth's crust, a huge 18-mile-wide (30 km) region of very high conductivity reaches down to a depth of 20 miles (35 km), well below the 12-mile-thick (20 km) crust. This giant magma zone isn't one big pool, but a series of interconnected pockets, scientists think.

The findings were bolstered by research in geochemistry, rock composition and seismology from other teams, Whaler said. "The results from standard electrical conductivity get a huge range, so the additional information gives additional bounds. I suspect nobody would have believed us without some supporting evidence from other techniques."

For example, a study published in the journal Nature on July 4 shows the mantle under the Afar region is about 212 degrees Fahrenheit (100 degrees Celsius) hotter than it should be. And although the crust is thinner than in other spots around the planet, it is actually thicker than models predict. [What is Earth Made Of?]

"Most people have said we can look at the Afar Rift and it's a good on-land analogue of midocean ridges," she said. "But what this result says is, there is still quite a distinct difference between the crust and upper mantle beneath a fully formed spreading ridge and the Afar Rift."

For Roger Buck, a geophysicist at Columbia University's Lamont-Doherty Earth Observatory who was not involved in the study, the discovery raises questions about what controls the timing of magmatic activity such as dike intrusions.

"A commonly held view is that long, quiet periods occur because there is no magma available in the crust to trigger dike opening and volcanism at spreading centers," Buck wrote in an accompanying editorial published in Nature Geoscience. "However, the results ... bring into question this standard view. Instead, there may always be large quantities of magma available in the mantle and shallow crust at many spreading centers."

Magma Blob Beneath Afar Rift In Ethiopia Puzzles Scientists
Fascinating Volcanoes
1 / 7
Marum Volcano - Ambrym Island
<a href="http://www.volcanodiscovery.com/vanuatu/" target="_hplink">Volcanodiscovery</a> considers the Marum Volcano in the southern Pacific Island of Ambrym one of the most unspoilt and intact places of the earth. In 2010, a Youtube video of volcanologist Geoff Mackley climbing into the boiling Marum crater went viral. "A lot of people might think I'm crazy," <a href="https://www.huffpost.com/entry/geoff-mackley-daredevil-r_n_750650" target="_hplink">said</a> the freelance photographer from Auckland, New Zealand. "The incredible noise... the heat.... the toxic gas... the falling rocks...the danger, nothing else in life will ever compare to the mind blowing rush of being so close to a spectacle like this!"
Geoffmackley/Youtube