The world chess champion Magnus Carlsen turned 24 last Sunday and had many reasons to celebrate: it was the most fruitful year of his young chess career. For nearly four years he has dominated the FIDE rating list as the world's top-rated player. He won two additional world titles in the rapid and blitz play last July. With the victory in Sochi last month, Carlsen secured the classical world title for the next two years. 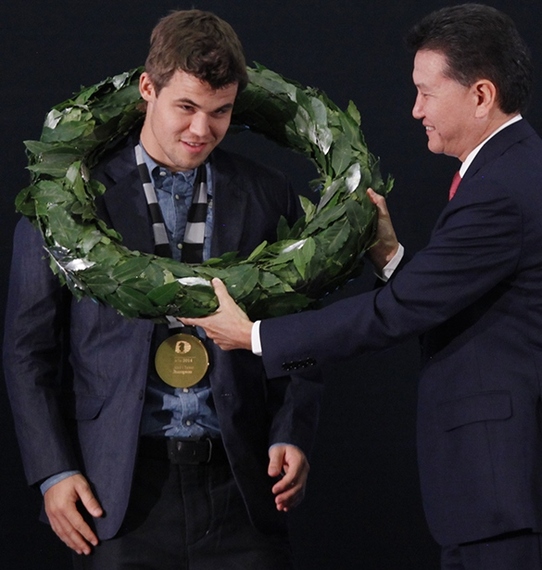 "I feel happy and relieved," said Magnus Carlsen after defending his title against the challenger Vishy Anand in the World Chess Championship Match that ended last month in Sochi, Russia. The final score was 6.5-4.5.

The two point victory margin was widely predicted before the match. The age of the players was the main factor: in the battle of the generations Anand, 45, was likely to make more mistakes than the 23-year-old Norwegian. Last year in Chennai, India, Carlsen beat Anand 6.5-3.5 to become the world champion.

Anand came to Sochi better prepared, posed more problems for his younger opponent and the match became tense and dramatic. It will be remembered for one fleeting moment in Game 6 after Carlsen allowed a three-move combination. It could have reversed the momentum of the match in Anand's favor, but he missed it. After the match, the Indian grandmaster was gracious in defeat, admitting that Carlsen was the better player.

The match began with the drawing for colors performed by a magician. "In 1998 at the Chess Oscar ceremony," Anand remembered, "we had a magician and he stole my watch." Anand did better in Sochi: he kept his watch a drew the white pieces for the first game. The first two games gave us a preview of what to expect in the match. 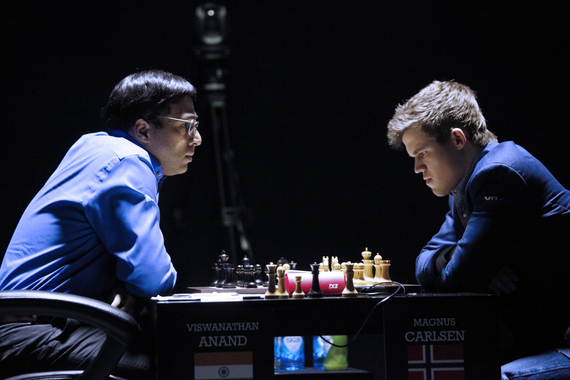 In Game 1, Anand opened with the queen pawn (1.d4) that gave Carlsen some trouble towards the end of the match in Chennai. This time the Norwegian played the Grunfeld Indian, seeking a more dynamic play with the black pieces. Later in the match, he also added the solid Queen's gambit.

In Game 2, Carlsen established 1.e4 as his main attacking weapon with white. He revealed only after the match that one of his seconds was Michael Adams, the top British player of the last two decades and a king-pawn specialist.

Every world chess championship evokes the names of previous champions. Game 2 was played on November 9 - a memorable day.

It was Mikhail Tal's birthday. He would have been 78 years old. A memorial blitz tournament in his name was being played in Sochi, won by the Azerbaijani GM Shakhriyar Mamedyarov ahead of Alexander Grishuk.

On November 9, 1985, Garry Kasparov defeated Anatoly Karpov in Moscow and became the youngest world champion at the age of 22. In the last game of the match he played the Two Tower variation of the Scheveningen Sicilian and won. It had a huge influence on their future encounters. Unable to break it, Karpov never played the move 1.e4 in a world championship match again. 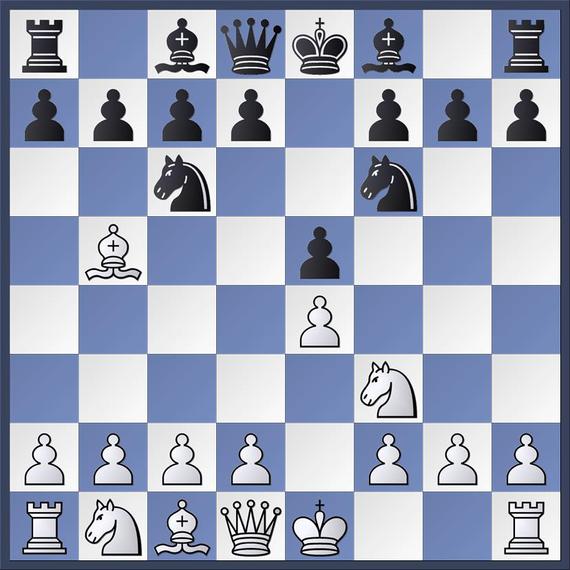 It appeared in the first official world championship match between William Steinitz and Johannes Zuckertort in 1886. Black wants to capture the central e-pawn - a sound opening strategy for the last two centuries. After 128 years we were back where it all began.

On November 9, 1989, the Berlin wall came down. The Germans were united and in other countries of Eastern Europe communism fell like dominos. But in the year of 2000 Vladimir Kramnik erected the Berlin wall on the chessboard and beat Kasparov in the world championship match in London. The Berlin defense was an excellent choice: Kasparov had to play without his favorite piece - the queen and Kramnik got his bishop pair. 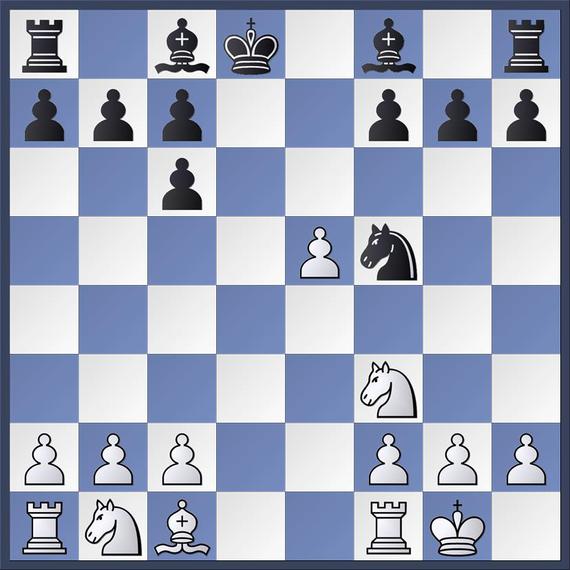 Kasparov could not win a single game in the match. After reigning for 15 years Kasparov had to part with the world title. Soon after the match the Berlin defense flooded the chess world. It appealed to many players either as a rich endgame or as a queenless middle game.

Carlsen said after the match in Sochi that the Berlin defense suites his style well and he likes it to play it with both colors. In Game 2, Carlsen just protected his e-pawn with 4.d3. It was not an ambitious choice, but at the beginning of the match - in the shadowboxing stage - players like to gather information before they start hitting hard.

Anand made a few inaccuracies and Carlsen took over the game. At one point he created a nice construction of heavy pieces on the e-file: 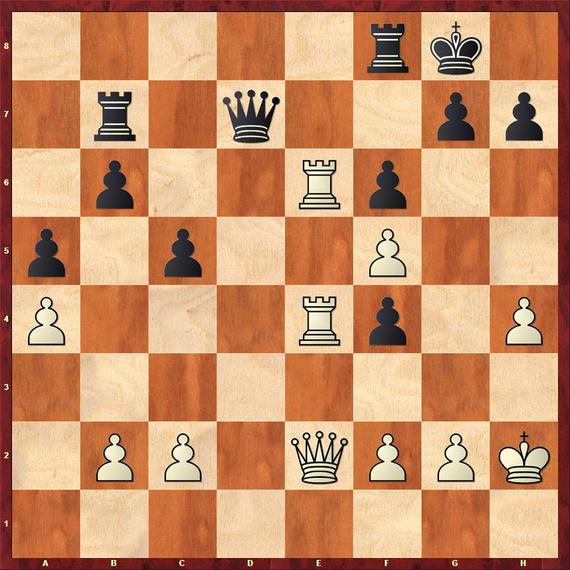 The commentators brought in another world champion, Alexander Alekhine, and his heavy formation. 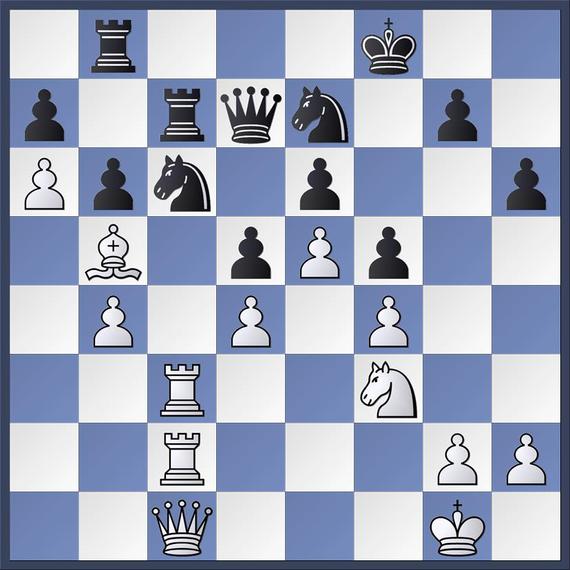 The heavy piece line-up on the first three ranks was know as Alekhine's train with the locomotive (the queen) pushing two wagons (the rooks). It is also known as Alekhine's gun, a name that was appropriated by a heavy metal band from Brooklyn.

The title of the world champion carries weight. Otherwise we would have to call it Blackburne's gun, since the man nicknamed "Black Death" grouped the pieces exactly as Alekhine did later already in Paris in 1878 against Rosenthal. 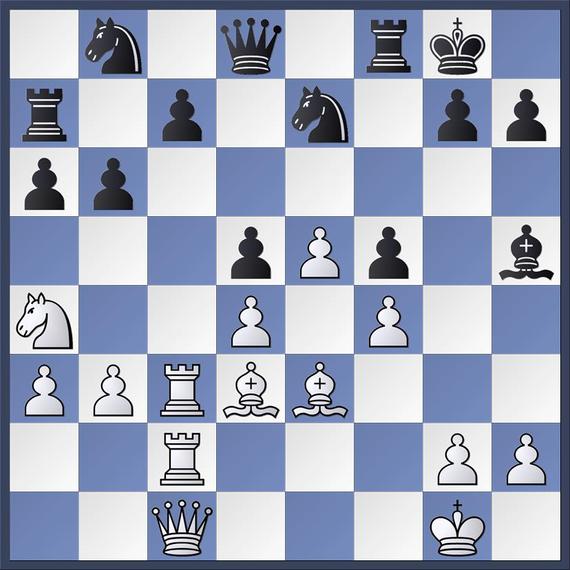 We saw the formation used for a queenside invasion in the game of two famous world champions, Bobby Fischer and Boris Spassky. 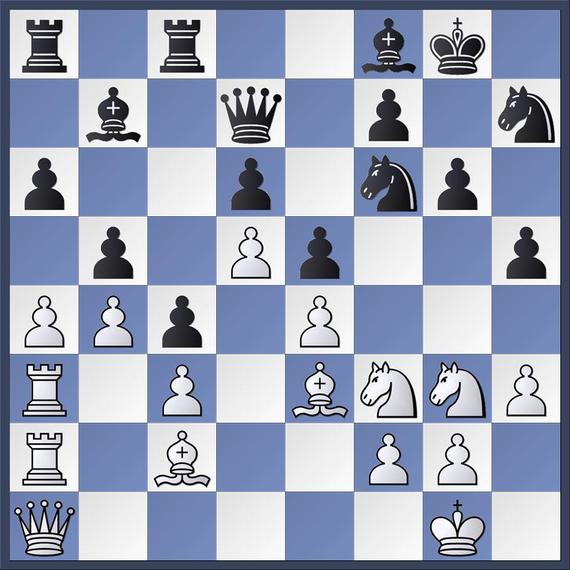 The Alekhine formation can be deadly on the kingside and often leads to mating attacks. 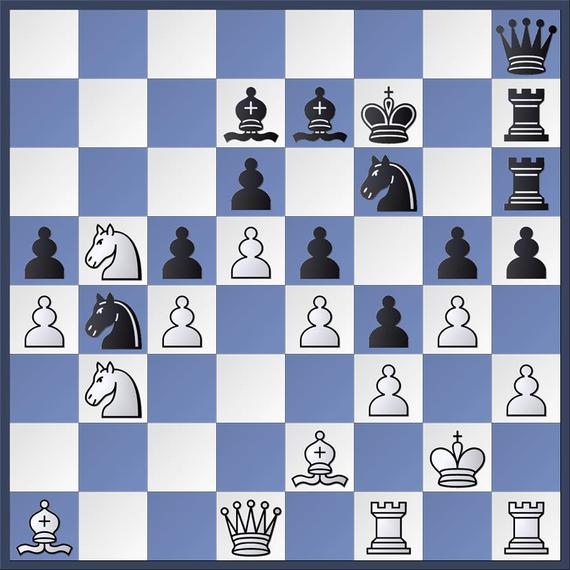 Watching Game 2 was an "old man with white hair" as Carlsen put it. It was Boris Spassky sitting among the spectators. Was Boris thinking about his first world championship against Tigran Petrosian in 1966? I remember it well, having covered it for a Prague daily together with Salo Flohr, the 1937 FIDE challenger to the world champion Alekhine. Or perhaps the Match of the Century played against Bobby Fischer in Reykjavik in 1972 crossed Spassky's mind?

"It can take six months to win ten games," I argued in Pasadena in 1978. I played the U.S. Championship there, but during the evenings Bobby and I had dinners, discussing all kinds of things.

"No, not if both players fight," he countered. "The baseball season takes a half year and nobody complains."

Fischer's reason for longer matches was to determine who is the better player and to eliminate accidental wins, for example falling into an opening trap or tripping over unsuspected novelty. His invention - the Fischer Random - wipes out the opening preparation.

Bobby would never agree to play a 12-game world championship. He would point to Game 3 Carlsen and Anand played in Sochi. After 26 moves the Norwegian grandmaster was in dire straits right from the opening and lost rather quickly without a fight. 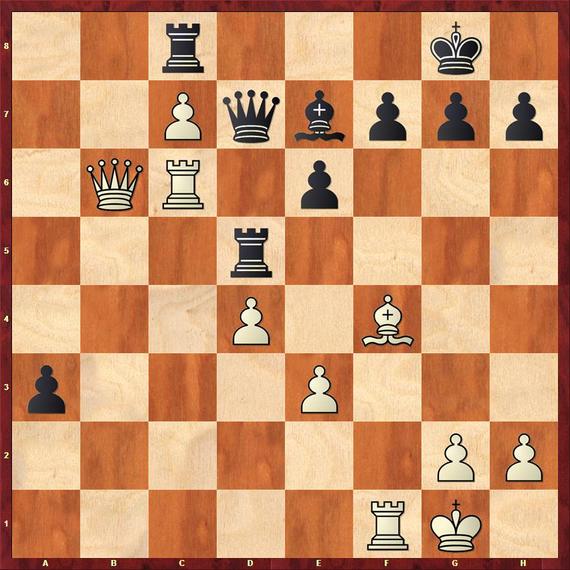 26.Rc6! Almost identical position appeared in the game Tomashevsky-Riazantsev, played in Moscow in 2008. The only difference was the position of the h-pawn on h3. 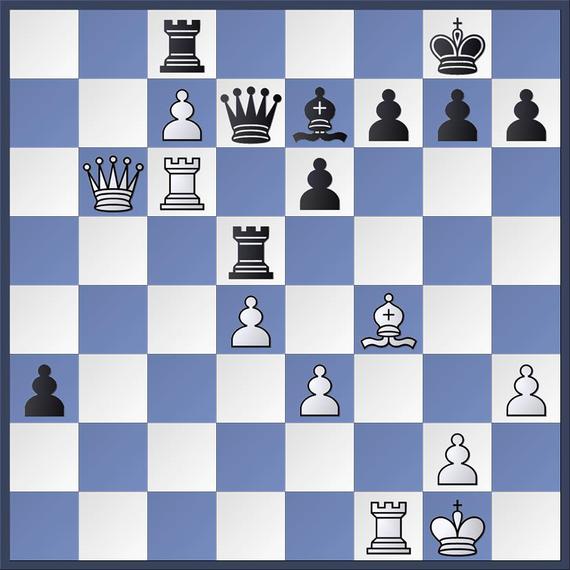 Carlsen's seconds could have caught it, but they didn't and the finish was painful.

"When something goes wrong, it's always my fault," Carlsen softened the blow. The match was now tied.

The turning point of the match came during Game 6. Trying to improve the position, Carlsen marched his king to the wrong square. It was a mental slip, an inaccuracy that should not happen. Anand didn't expect a three-move combination that would not only bail him out but would give him a big advantage. It was not there before, but Carslen made it possible and all India held its breath. Is Vishy going to find the refutation and punish Carlsen for his mishap? In one minute, in which every second felt like eternity, Anand played a pawn move and Magnus escaped. When both players realized the double-blunder, Vishy's resistance collapsed and he lost. 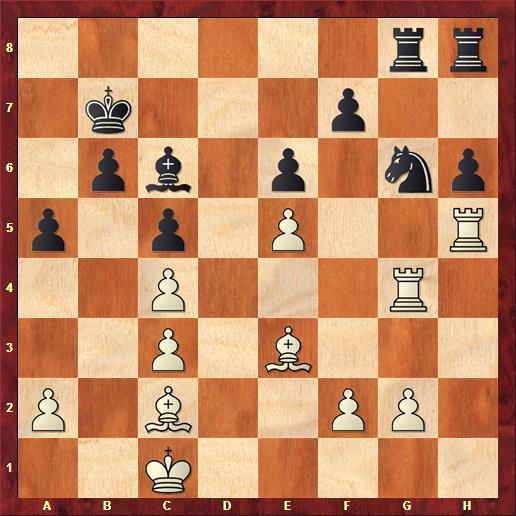 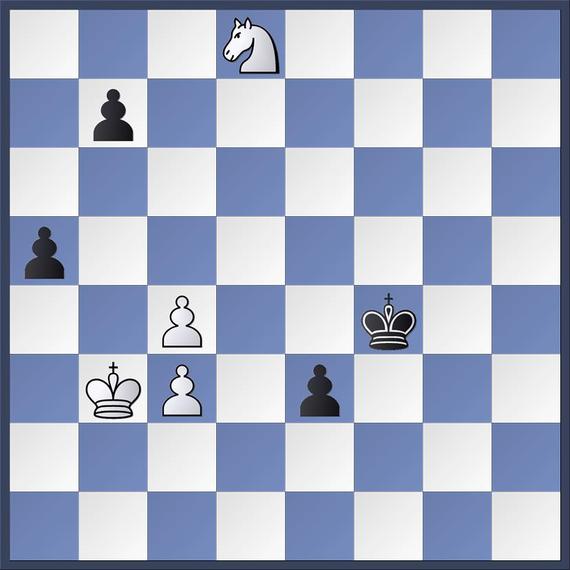 After experimenting with the Sicilian, Anand returned to the Berlin defense in Game 7. Sensing his opponent vulnerability, Carlsen took Anand on a long journey lasting 122 moves. But the Norwegian was unable to win the following unusual endgame. 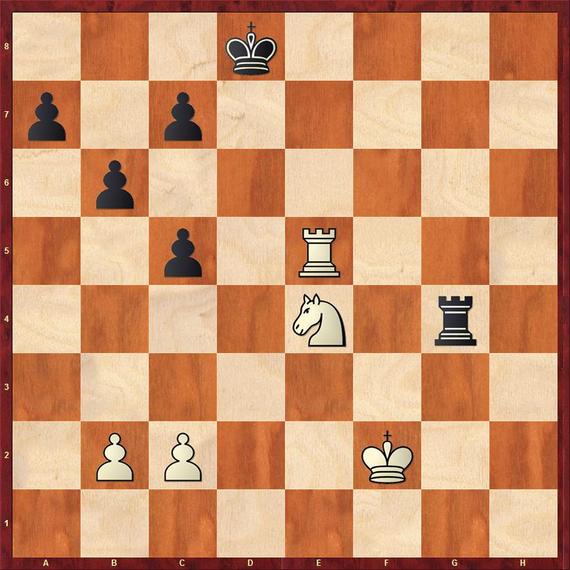 It was the Berlin wall at its best or worst. "It was a key game," said Carlsen later. Had he won it, the match would have been over, he believed. It should have tired Anand out; instead, it looked like it sapped energy from Carlsen.

Anand was still in the match, drawing the next three games. In Game 11, the last encounter of the match, Anand build the Berlin Wall again and played well in a tense battle. It could have gone either way, people thought, but Anand's nerves cracked first. Emotions got the better of him.

He may have thought about Tigran Petrosian, a world champion who made living out of exchange sacrifices, and made a Petrosian-like sacrifice, plugging the b-file, perhaps thinking it was the best way to force Game 12. At a first glance the sacrifice looked playable, but it was not necessary and it played into Carlsen's hands. The Norwegian loves material. He calmed down and played the technical ending well. Anand missed better defenses and Carlsen won the game and the match. 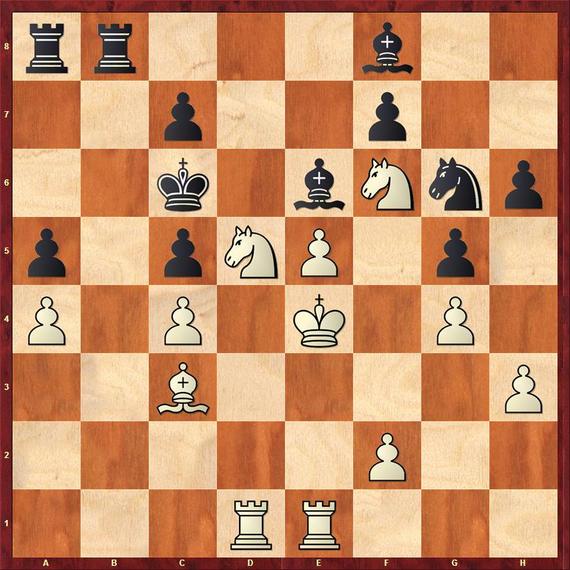 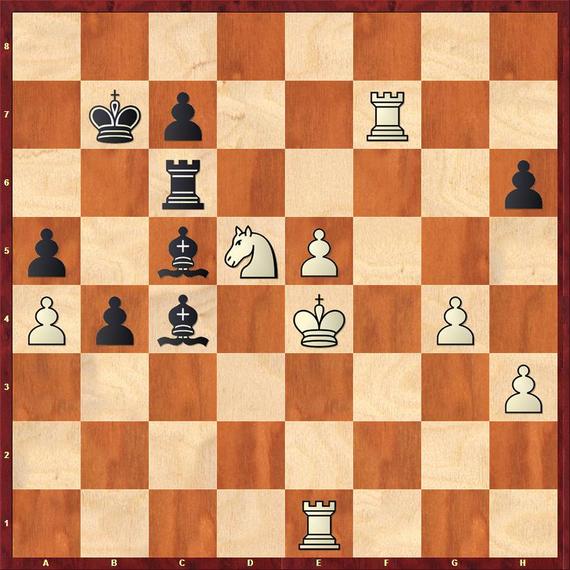 Carlsen's next world championship challenge comes in 2016. Who will be his opponent? Magnus named Fabiano Caruana, Levon Aronian and Alexander Grischuk. He didn't mention anybody from the forty-something group, players such as Anand, Kramnik, Veselin Topalov and Boris Gelfand. And Carlsen also skipped Hikaru Nakamura who won a $100,000 friendly match against Aronian last month in Saint Louis.