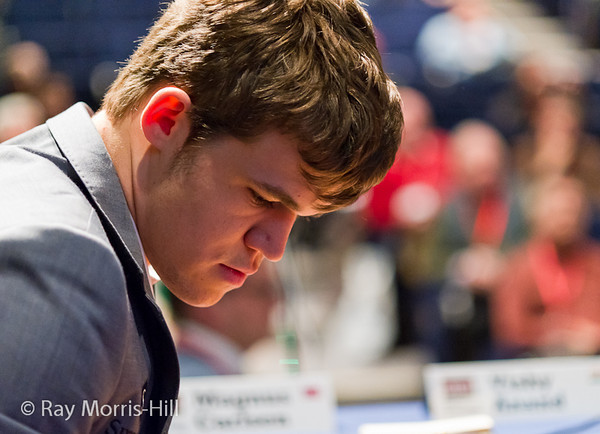 Looking down from his new stratospheric heights, he must feel like the Swiss balloonist Auguste Piccard who on May 27, 1931 flew nearly 10 miles above the Earth, the first man to see the planet as a round ball. Carlsen can see his nearest rating rival, the former world champion Vladimir Kramnik, looking up. 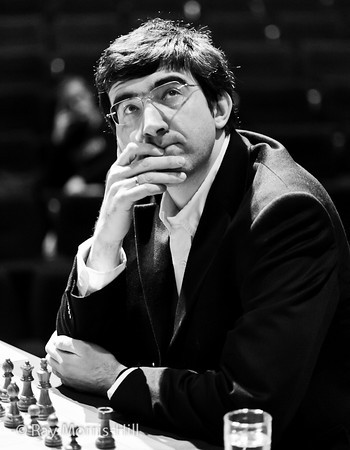 Carlsen's rating of 2861 will officially appear in the FIDE January rating list. It is not just the number - inflation takes its toll - but the gap he opened on the other players. Vladimir Kramnik is 51 points behind. In 1972, Bobby Fischer was 125 points ahead of Boris Spassky, his nearest contender. Adding inflation, Fischer's rating would hover around 2880 today. Garry Kasparov rose to his record rating of 2851 in 1999, 80 points above Vishy Anand.

The traditional crosstable from the London Chess Classic will be used in the annals of rating history, sealing Carlsen's extraordinary achievement.

Malcolm Pein, the organizer of this wonderful event, loves the soccer system - 3 points for a win, 1 point for a draw. He believes it encourages the fighting spirit, but inviting players who produce exciting chess works for him as well. Carlsen certainly does not need any incentives to play for a win.

The victory in London must be Carlsen's career best. Kramnik matched his own performance from the last year, but it was not enough to outpace Carlsen this time. Nevertheless, Kramnik moved to second place on the FIDE rating list. For the last 20 years, he has been rated among the world's top ten. Michael Adams and Hikaru Nakamura played well and could have scored more points had the breaks gone their way. The world champion Anand, 43, can't get going lately.

Carlsen considered the game against Judit Polgar his best. The legendary Hungarian grandmaster Lajos Portisch once remarked that openings should be played to reach a playable middlegame and Magnus seems to agree. He got a small edge against the Hedgehog system by using a 40-year-old set-up, invented by the highly talented Serbian grandmaster Ljubomir Ljubojevic. Carlsen loves the middlegame and plays endgames with deadly accuracy. His active pieces and a distant passed pawn clinched the victory. 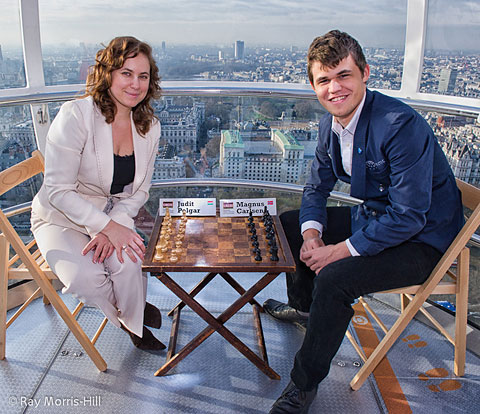 Polgar and Carlsen posing at the London Eye. It was more serious in the tournament hall.

Preventing the pin Bf8-b4, the pawn move seems like a loss of time, but that's what prophylactic chess looks like: you don't let your opponent do what he usually likes to do.

A preferred square for the dark bishop, but Judit does it only after kicking the white knight from the center.

Bringing pieces into the game first is Ljubojevic's idea from the Sicilian in a similar position. The more straightforward 11.f4 was also successful.

The Hedgehog formation in which the black pieces crawl on the last three rows, getting the prickles ready against an anticipated attack. Patience is virtue for white.

The knight assumes a defensive role. Magnus is now fully developed and can think about pawn expansion. 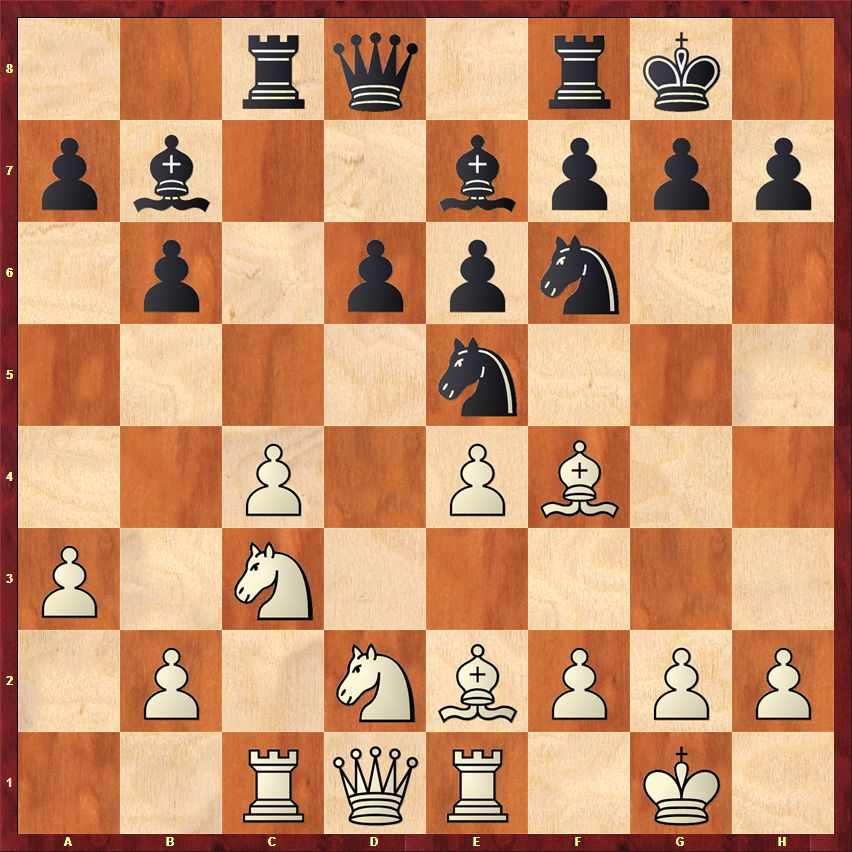 The position has a striking similarity with the game Ljubojevic-Andersson, Las Palmas 1974, after 14 moves: 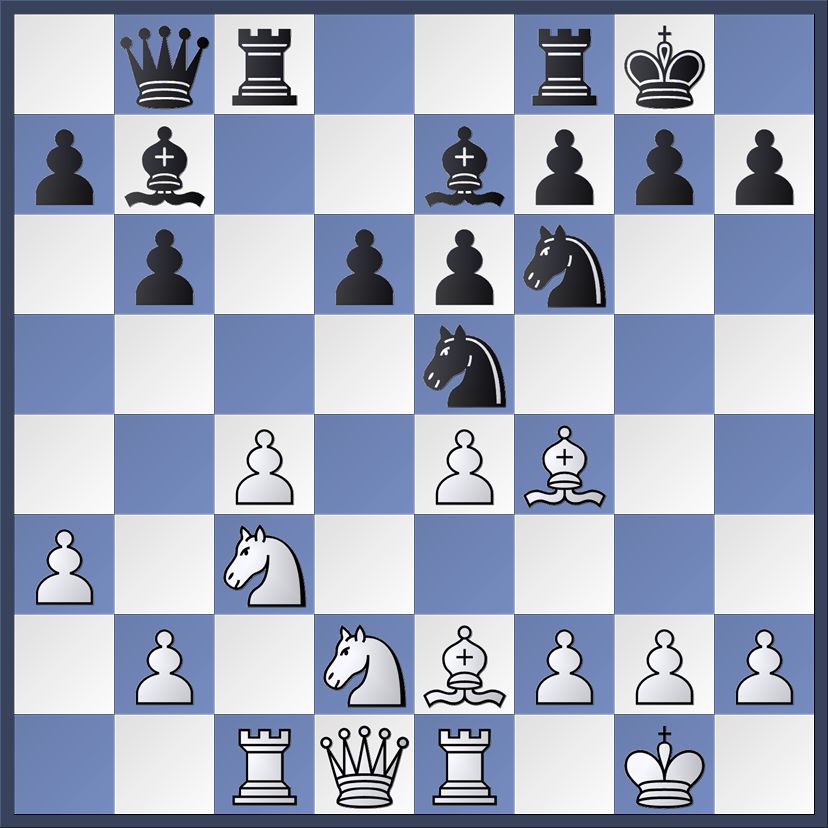 Remarkably, the two positions were reached from two different openings. The small difference lies in the placement of the black queen.

And just like that Carlsen grabs space on both wings. He also denies the black knights the squares in the center. Polgar has to live on the last three rows.

Weakening the dark squares. If Polgar wanted to move a pawn in front of her king, she should have chosen 22...h6. Carlsen now gets the space in the center. 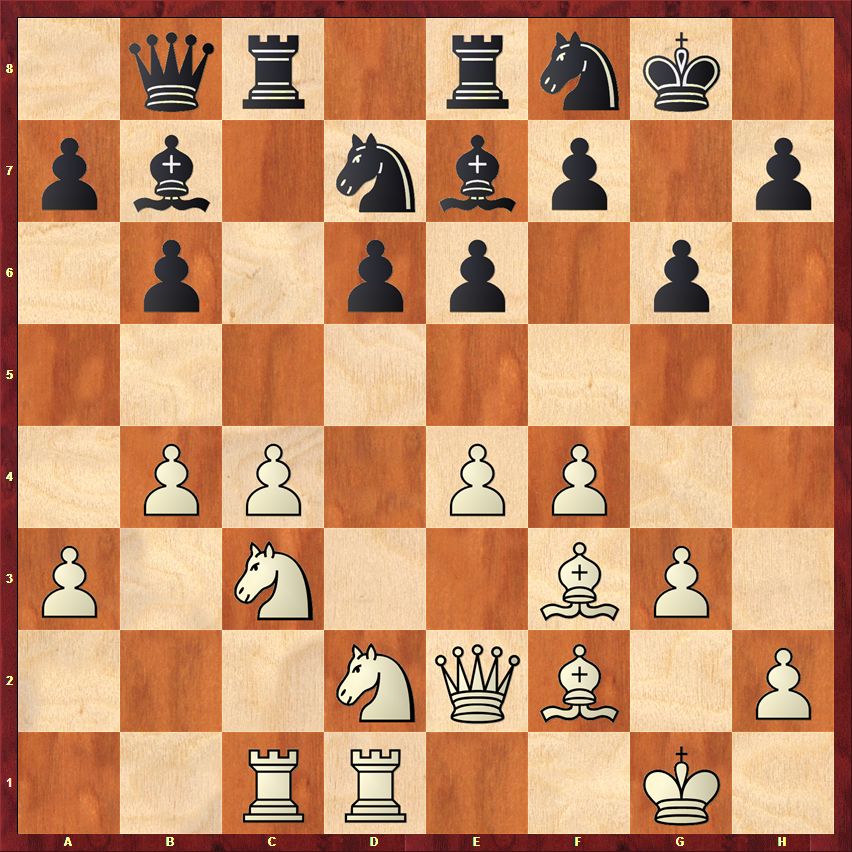 The thorn in black's position, the pawn on e5, is nicely overprotected and the white pieces can enjoy the space behind it. When Aron Nimzovich's idea of overprotecting the e5-pawn first came out, Hans Kmoch published a witty parody in the Wiener Schachzeitung in February 1928. 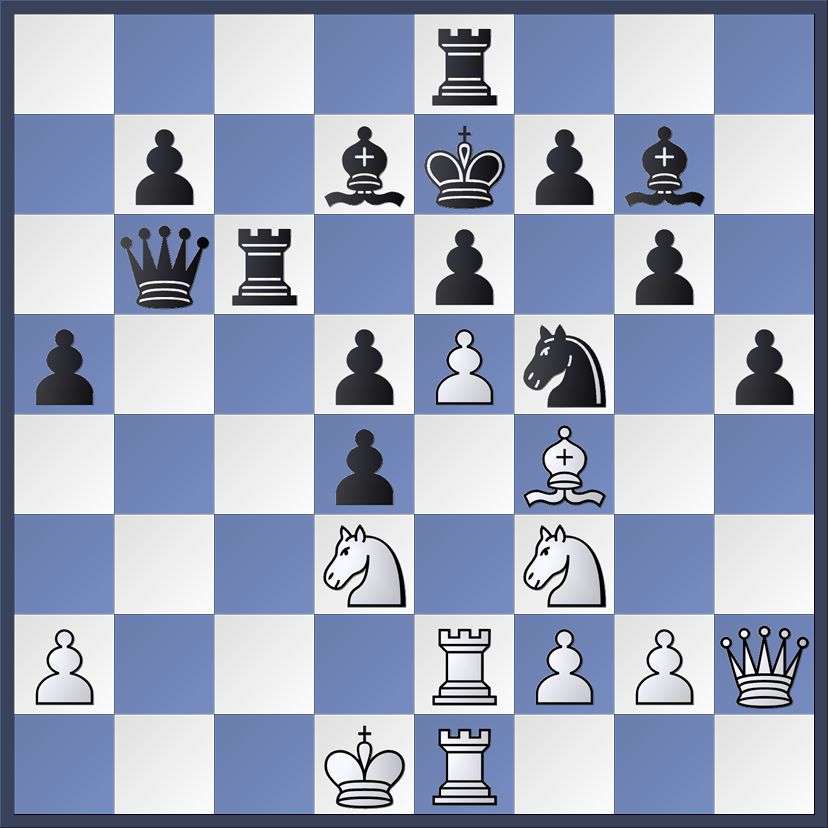 Pilling up the heavy pieces on the c-file gives the impression that black is going somewhere, but the rook on c6 is vulnerable. Magnus has to figure out how to attack it.

This is the first time a black piece crosses the third rank.

Magnus detected a weakness in black's camp: pawn f7. The white pawns are less important than the black king.

Judit has to exchange the queens to avoid immediate disaster, for example after 37...Rdd8 38.Rb7 black can't stop the devastating fork 39.Nf7+. 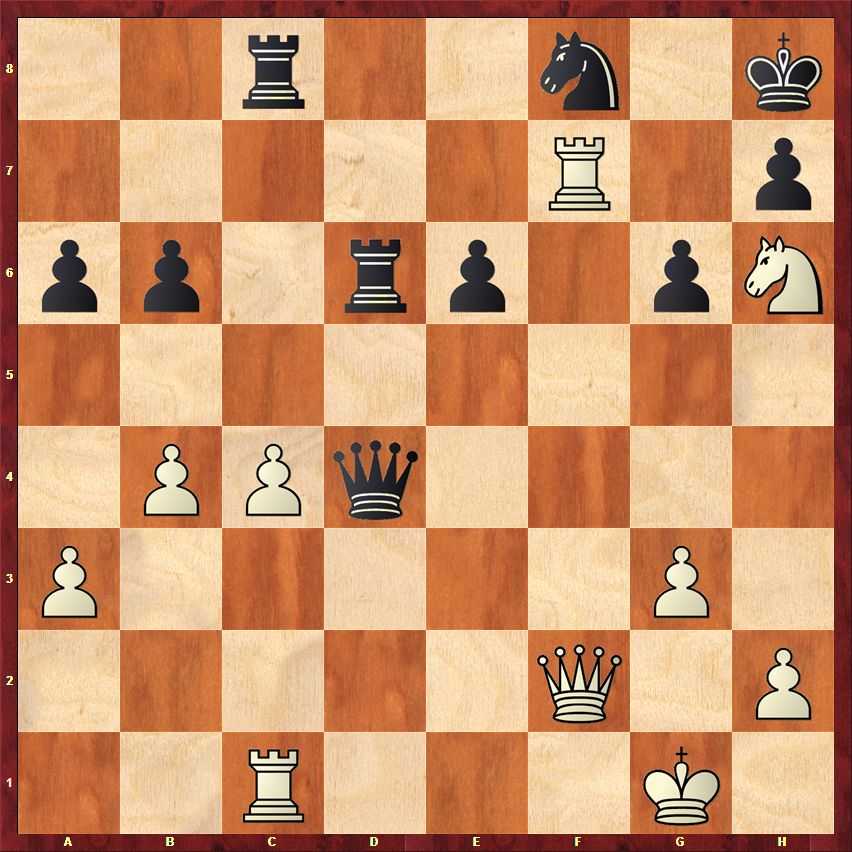 Exchanging the queens 38...Qxf2+ 39.Kxf2 brings the white king closer to the center.

The hogs are on the seventh rank and white can eventually create a distant passed pawn. 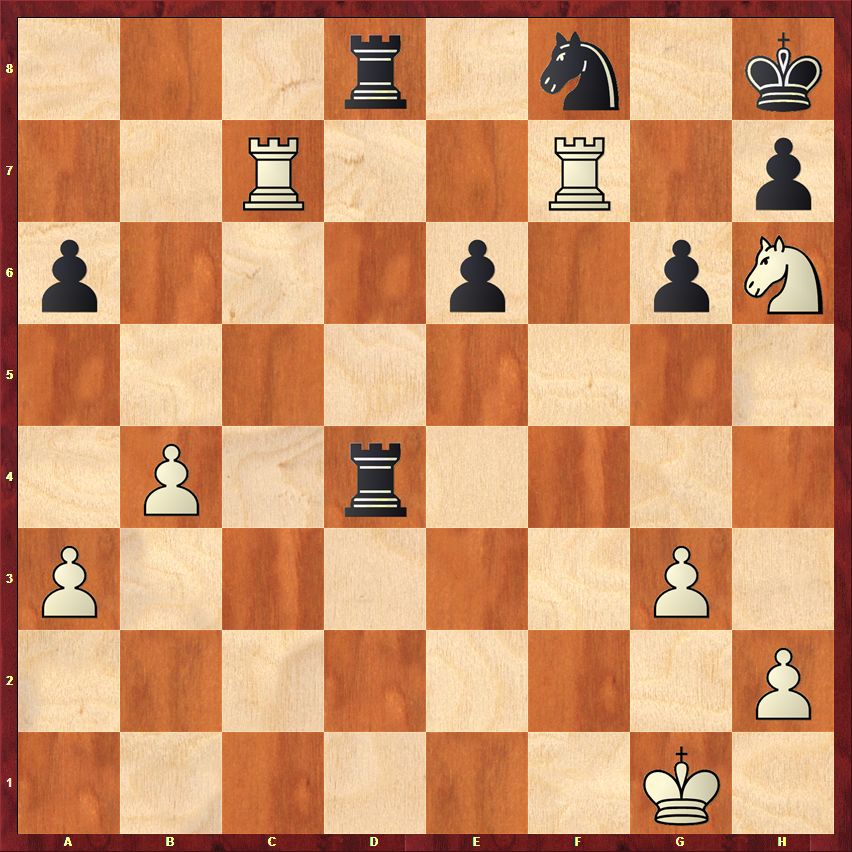 Chess games are fluid. They can flow from one opening to another still keeping the same image as 40 years ago. Ljubojevic and the Swede Ulf Andersson became the architects of the Hedgehog system in the early 1970s. But Ljubo turned around and also proposed how to fight against it with the white pieces. It caught on.

Some of the notes are from my book Wijk aan Zee Grandmaster Chess Tournament 1975 and were written immediately after the game.

I wanted to try an interesting idea of Ljubojevic's. Ljubo argued that after 7.N1c3 a6 8.Na3 the knight on a3 is misplaced, black's main point in the Lasker-Pelikan-Sveshnikov variation. Instead, he brings his knights and other pieces closer to the center. 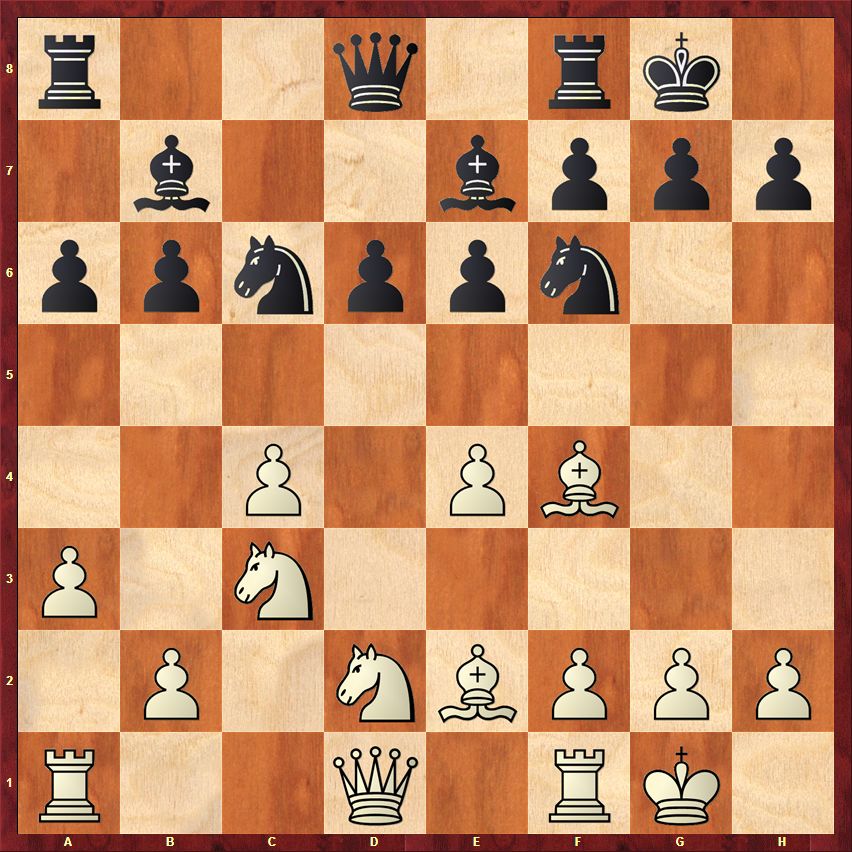 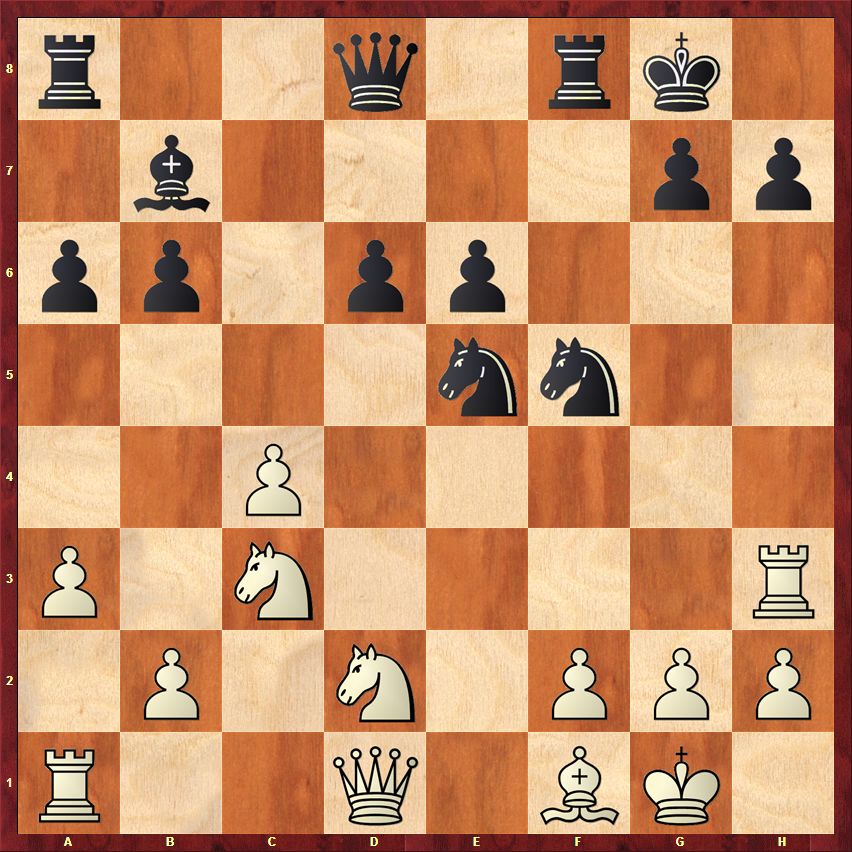 A most difficult position. It looks very strong for black; however, his pawns are split into three "islands," while White's pawns are in two groups. An endgame would be food for White but first he must survive Black's attack.

It is interesting to watch chess players make judgments about different middle game positions. After this game Kick Langeweg told me that he prayed for only one thing:"To be Mikhail Tal!" When I asked why, he replied: "Because he would have won the position after 19.Rh3 very quickly for black."

When I showed the same position to the Yugoslav grandmaster Ljubojevic shortly afterwards, he got excited and his voice rose an octave:"You are better! Look at Black's pawns. They are weak! The rook on h3 prevents everything and once the endgame is reached Black is dead." -lk75

The point of white's combination - Black loses a piece.

The column was prepared with ChessBase 12 and we used a cool new feature to search the games. The analyses were checked by Houdini 3. Both tools are invaluable for tournament players and chess writers.

Correction: The article incorrectly stated that Lionel Andrés "Leo" Messi is an Italian soccer superstar. He is from Argentina.