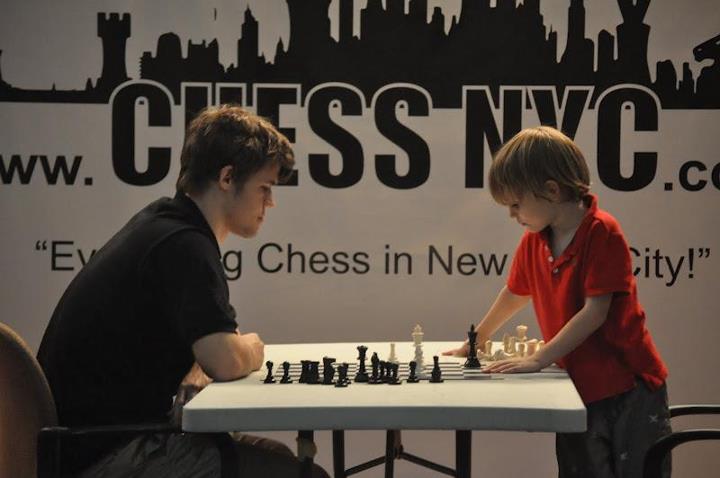 They could barely reach the other side of the chessboard, but playing against the world's top-rated grandmaster Magnus Carlsen was a thrilling experience for many New York kids.

Carlsen visited New York during the last two weeks in August. He played chess against children at the NYC Chess summer camps and against adults at the club near the Washington Square and the Marshall Chess Club. He was also engaged at the chess board with a billionaire investor and philanthropist, George Soros, and played a blitz game against one of the world's leading economists, Kenneth Rogoff. He shot baskets at pick-up games, visited the New York Yankees, and saw friends. Some people may recognize Magnus from his appearance on Colbert Report.

Carlsen was teaching children for the first time. "Magnus enjoyed working with them," said his manager Espen Agdestein. " He hopes to be back next year."

Michael Propper, the co-director of the New York City Chess programs, was ecstatic:" The week reached well beyond traditional chess introduction and promotion. It was motivational, inspirational, informational and, most importantly, tremendous fun...the impact of which will be felt for a very long time. " He added that Magnus can teach, cares and enjoys working with childern and his visit inspired many chess fans.

George Soros is a chess lover and has played the game more or less regularly since he learned it during the war in 1944. He invited Carlsen and Agdestein to his summer house in the Hamptons. They had a four-hour lunch, with undoubtedly interesting discussions and lots of chess.

Eventually, Soros and Carlsen teamed up against Agdestein and Richard Conn, a New York lawyer who helped Anatoly Karpov in his bid for FIDE presidency in 2010. The outcome of the game was never in doubt. 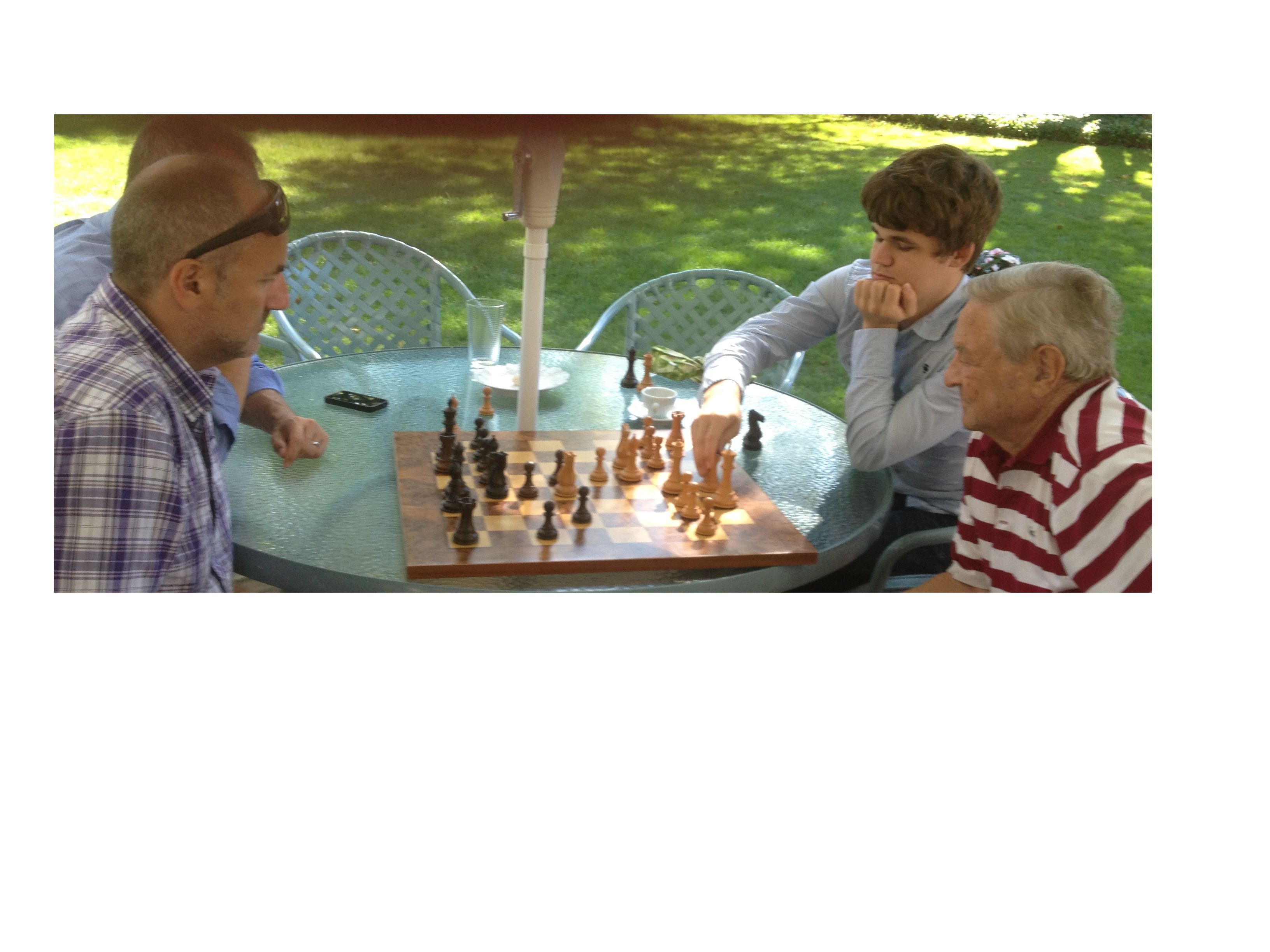 Arctic Securites, Carlsen's main sponsor, hosted a dinner in a fine New York restaurant, Per Se, on August 28. To give the evening a little chess flavor, Carlsen and Rogoff played an exhibition game. It was intended to be a five-minute blitz game but the clock was not working properly. They casually continued at a blitz-like pace anyway. 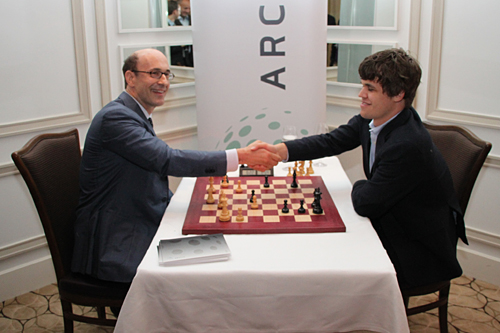 Rogoff has been Carlsen's admirer for some time. " Magnus plays at level of tactical brilliance and sublime endgame technique that I could not even imagined, even from people like Petrosian, Tal and Larsen whom I played in the 1976 Interzonal in Biel." Needless to say that Ken drew the games against the three chess giants. He qualified for Biel by finishing second at the 1975 U.S. championship where I was one of his victims.

Rogoff's chess talent was extraordinary. At 15, he played a blindfold simultaneous exhibition against 25 opponents in Rochester, N.Y. At 16, he was one of the top U.S. juniors and his considerable chess skills were publicly recognized by Bobby Fischer. He finished third at the 1971 World Junior Championship. In the same year he was a member of the U.S. team at the student olympiad in Mayaguez, Puerto Rico, and I was the captain. We played in U.S. championships and met on a few occasions when he lived in Washington, D.C. Rogoff became grandmaster in 1978, but after a few years left chess.
He turned to economy and became one of the most respected experts. He has been Thomas D. Cabot Professor of Public Policy and Professor of Economics at Harvard University since 1999 and for a brief two year period (2001-2003) the Chief Economist and Director of Research at the IMF. His advice is being sought by financial and political leaders throughout the world.

For more than 30 years, Rogoff didn't play any chess games, not even casual blitz games. What was he thinking about going against the man who just reached his highest rating of 2843 and sits at the top of the FIDE rating list as the world's best?

"I miraculously was allowed to escape with a draw," said the only chess grandmaster among prominent economists, and the best economist among chessplayers. The game tells a different story.

Blitz games should not be commented, some say, but moves that come to you are often based on instinct and can reveal a player's character. Greed, courage and fear are magnified. Brilliance is encouraged, but not practical. Carlsen said that Rogoff played a good game. The notes are partly based on their post-mortem.

The Breyer variation of the Spanish. "The defense is credited to Guyla Breyer, a Hungarian master who was among the top ten players in the world in 1918 but who died in 1921 at only age 27 of heart attack," writes Larry Kaufman in his absorbing book "The Kaufman Repertoire for Black and White," published by New In Chess. "To come up with the move 9...Nb8 at the time took a real genius, as the belief in "development" was very strong since the time of Morphy." However, the world champion William Steinitz and his challenger Mikhail Chigorin chased their horses back to the stable, to the square b8, long before Breyer did, perhaps less elegantly. 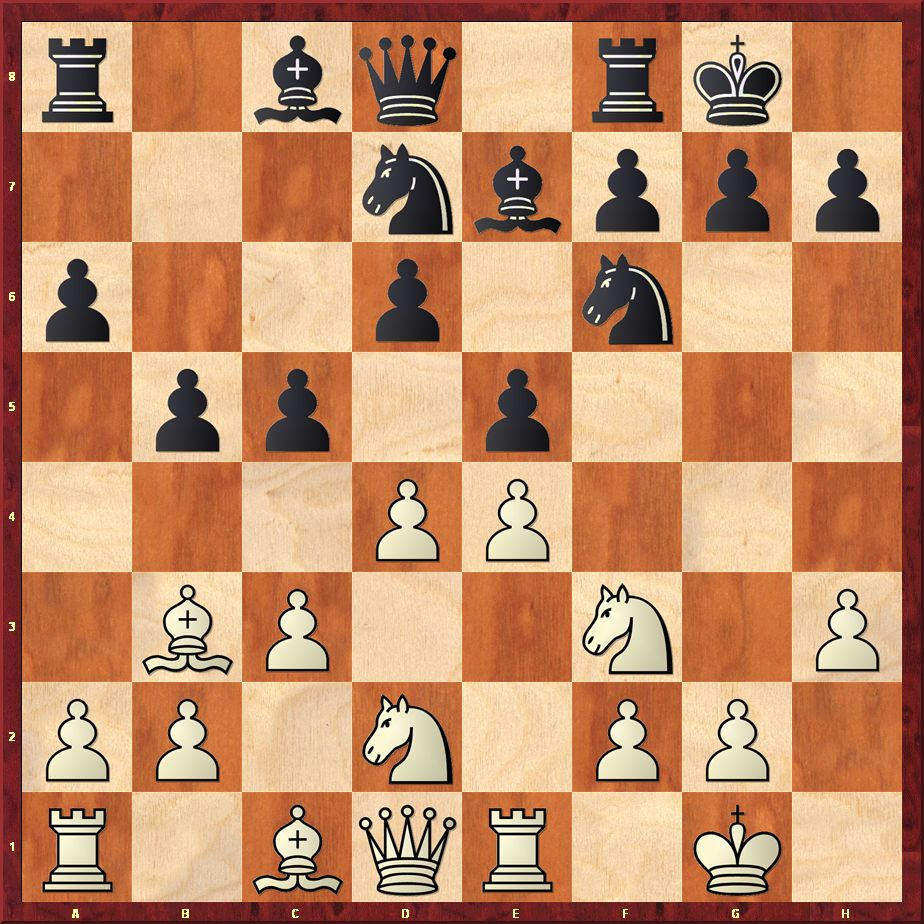 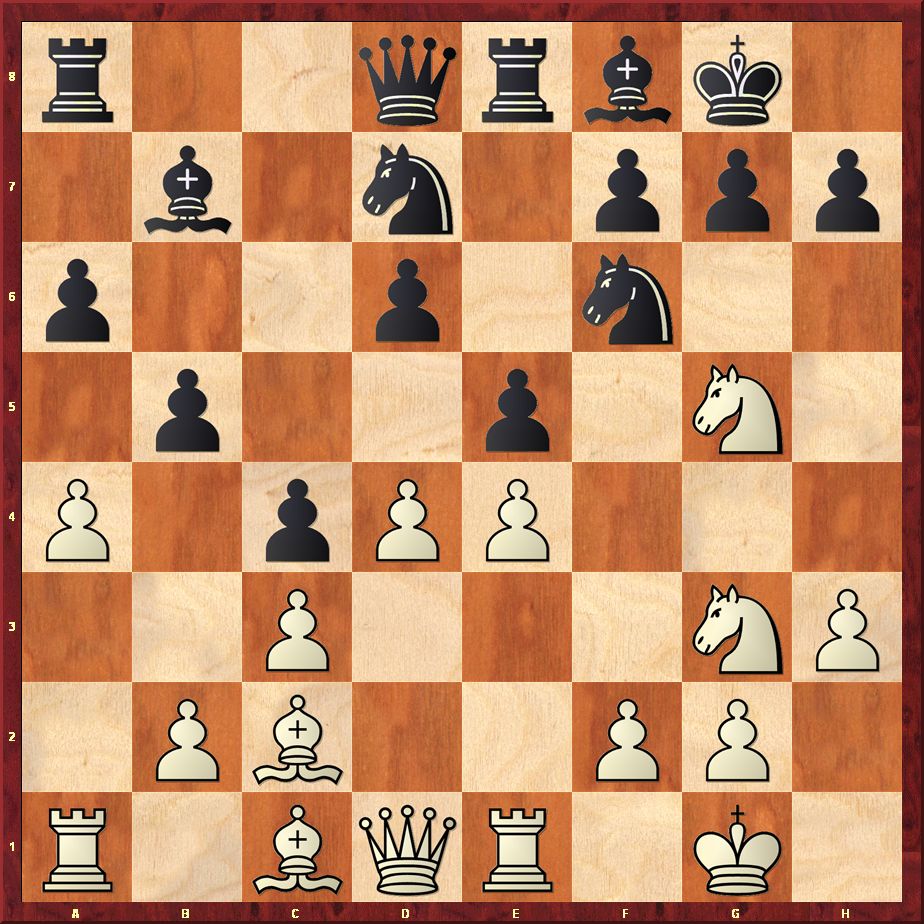 Carlsen goes for a violent clash in the center. "A very enterprising pawn sacrifice giving lots of compensation and perfect for crushing a much weaker player," says Rogoff. 16...h6 was played previously. Computers suggest 16...exd4 17.Qxd4 (17.cxd4 b4) 17...Nc5 with a pleasant game for black. 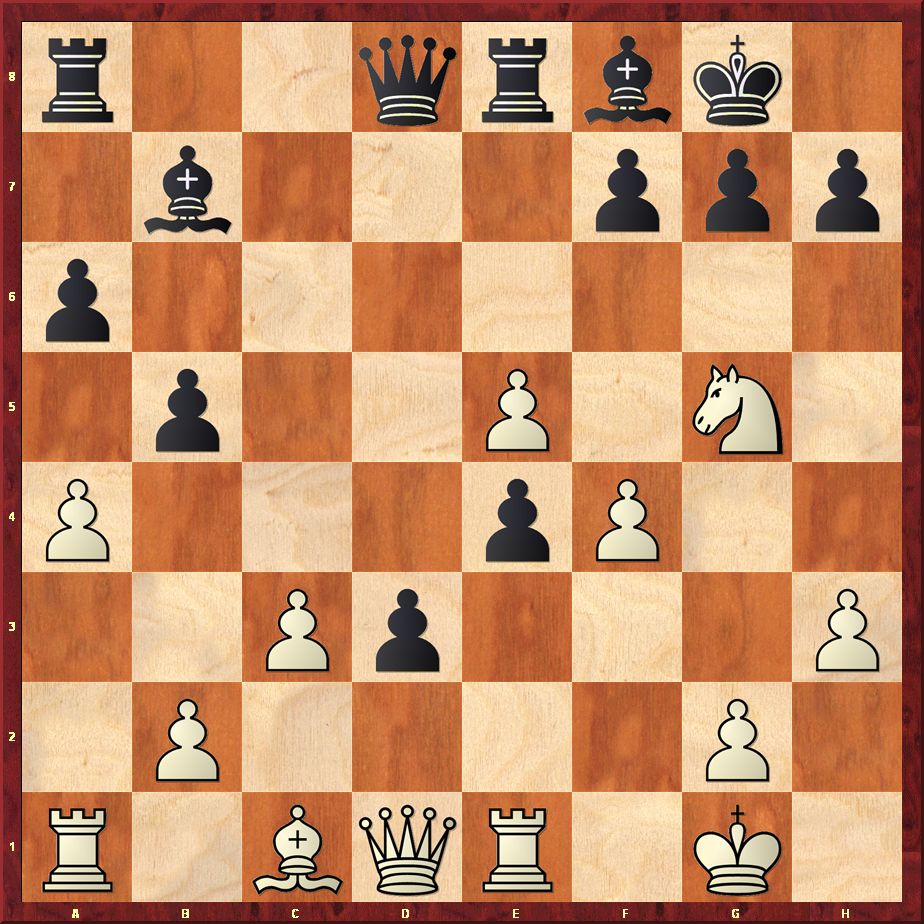 Magnus missed this queen sortie and now has to scramble. Fortunately, there is a way out. 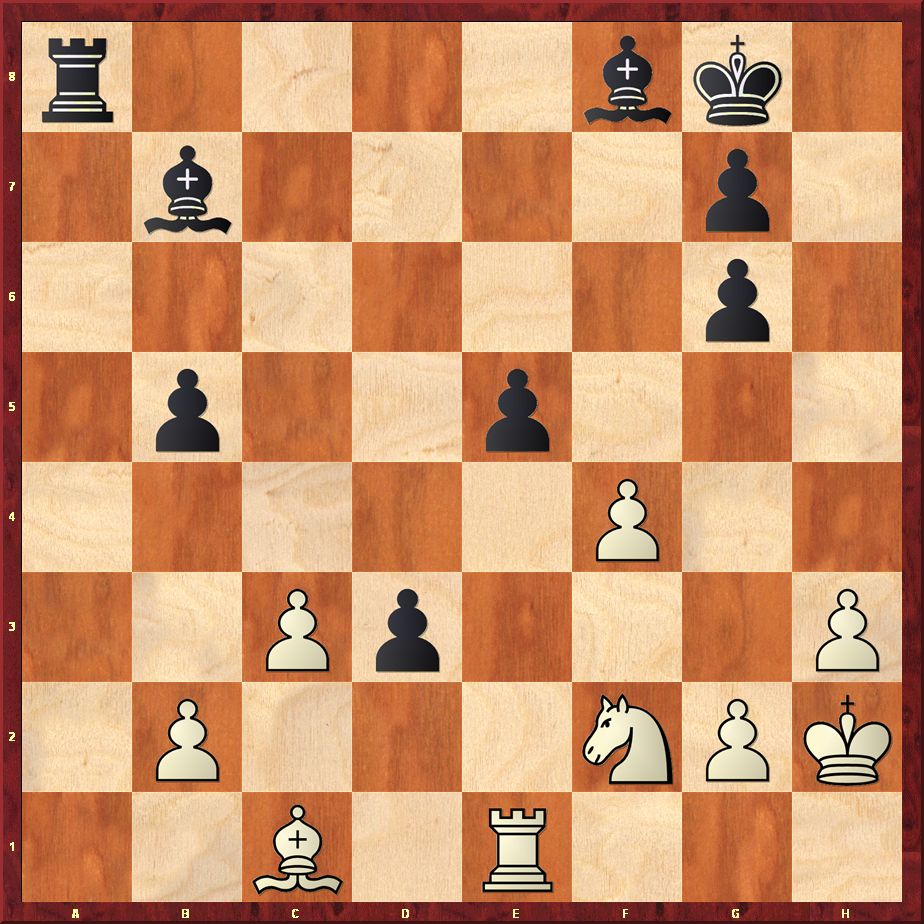 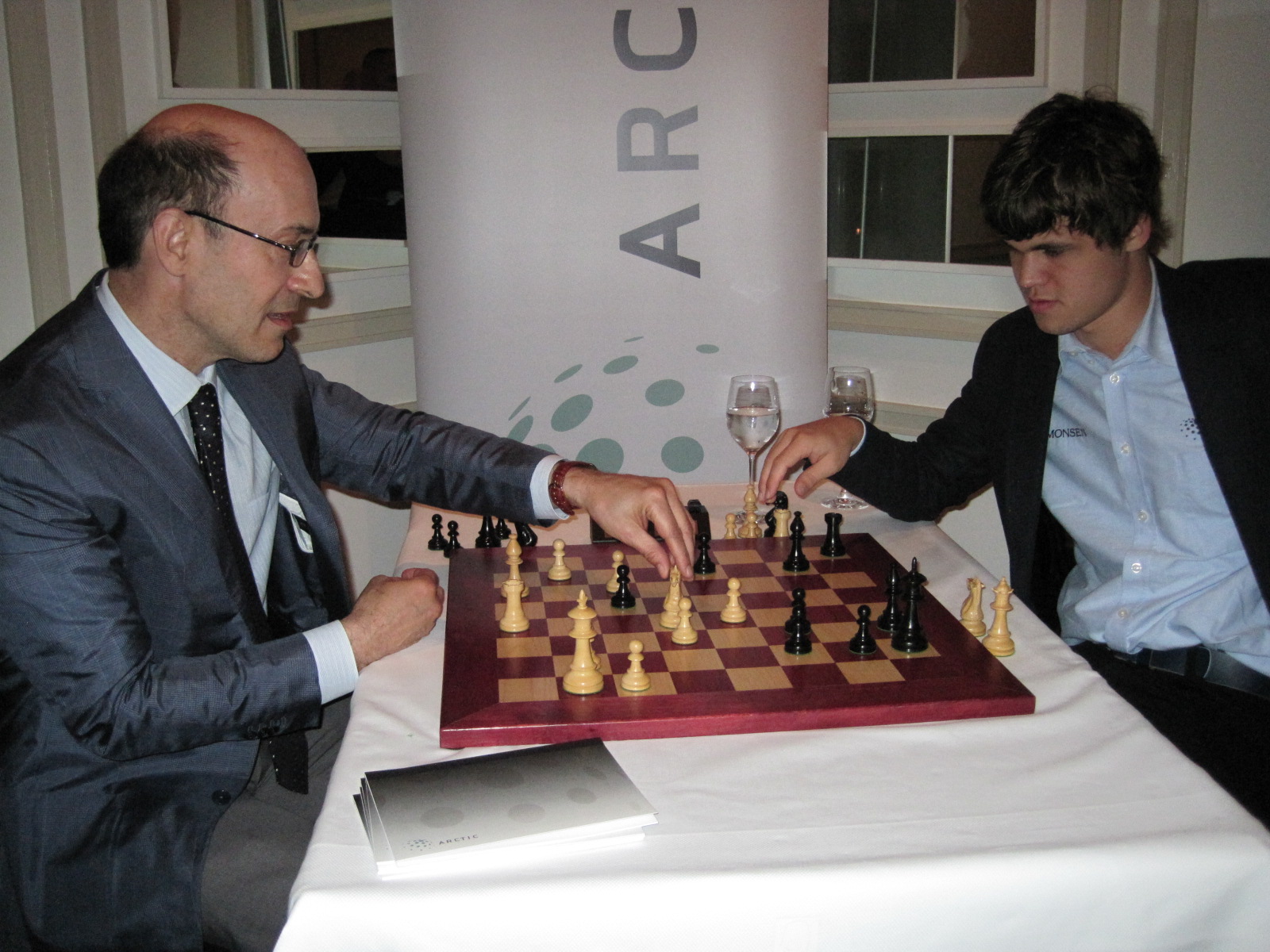 Friendly analysis after the game.