There was a time when we didn't know any better. In 1884, English scientist Thomas Huxley wrote that "probably all the great sea-fisheries are inexhaustible; that is to say that nothing we do seriously affects the number of fish." Back then almost all fishing vessels were sail-powered, fisheries science was in its infancy, and in the northwest Atlantic, which had already been fished by Europeans for hundreds of years, species like cod and halibut were still abundant.

While some observers noted that fish had become scarce in certain areas, few suspected overfishing was to blame, or even imagined it could be possible.

When President Gerald Ford, 40 years ago today, signed what would become the Magnuson-Stevens Act, scientists had shown that some fish stocks were declining, but in typical Cold War fashion, we blamed it on the Russians. We thought all we needed to do was chase foreign fleets out of U.S. waters and give Americans alone access to these waters. Surely our fishermen could not -- and would not -- deplete our vast fishery resources. 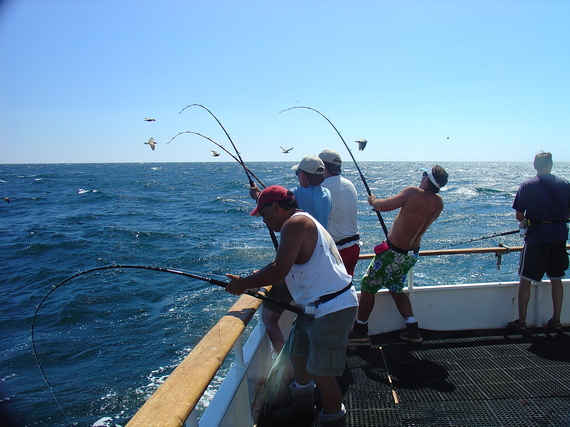 But then, we became great at fishing. New technology, combined with generous government subsidies and a failure to limit commercial and recreational harvests quickly led to overfishing - followed shortly by devastating fishery collapses. By the 1990's, it was clear that the Magnuson-Stevens Act succeeded in developing domestic fisheries and phasing out foreign fishing in our waters. Sustainable use of our fishery resources, however, had proven more elusive and many of the fishermen who had invested in boats and gear were broke.

Fortunately, bipartisan reforms to the law in 1996 and 2006 established the strong, accountable, and science based management system still in place today. The result: overfishing has ended, the number of overfished stocks is at an all-time low, and the value of fishery landings continues to rise. Fully rebuilding our fisheries would contribute $31 billion and 500,000 jobs to the economy -- one third more revenue and employment than fishing generates today. We will only get there, however, if we stay the course.

Still, the benefits of fishery reforms have not been distributed evenly. Decades of overfishing in New England and the Southeast have rendered once plentiful species like Atlantic halibut and goliath grouper commercially extinct. It appears Atlantic cod may face the same fate, and other stocks have rebounded slowly or not at all. This is difficult for fishing communities and the fishermen who feel like they have made sacrifices, but have not seen results.

But calls to return to the same failed policies of the past, as envisioned by legislation Republicans forced through the House last year, are not the solution, and distract from the real problems facing our fishermen. Instead of looking back to the old days of fisheries mismanagement, we should embark upon the next 40 years with a positive agenda that strengthens both fisheries and fishing communities.

This means funding more research that involves both commercial and recreational fishermen and helps managers understand the impacts of climate change on fisheries. We must improve and lower the cost of data collection and catch compliance by expanding the use of electronic monitoring. And we must improve our capacity to predict changes in the conditions that drive fish stock abundance.

In order for our fisheries management to be successful, our laws must be vigorously enforced. The vast majority of fishermen play by the rules, and we must not let them down by allowing cheaters to profit at their expense. And we must make fisheries more productive and resilient by ramping up efforts to protect fisheries habitat, reduce wasteful bycatch, and conserve forage fish that sustain populations of target species.

These efforts will require political courage and compromise. Yet as we continue to add species and stocks to the list of recovered and sustainably harvested fisheries, we can see that compromises are required to achieve long-term success.

Forty years ago today, we took control of our fisheries to manage them for the benefit of all Americans. After four decades of both successes and failures, we now have the most sustainable fisheries of any country on Earth. The successes should be celebrated and the failures excused, but only when we commit to not repeating the mistakes of our past.

Today we have no excuse. Today we know better, and we must do better.