A 104-year-old woman must lie about her age in order to use Facebook.

Marguerite Joseph, from Grosse Pointe Shores, Mich., will turn 105 in just a few months but Facebook doesn't know that, Detroit station WDIV reports. Because of a Facebook glitch that won't allow her to input her birth year of 1908, Joseph has been 99 years old for the past two years, as far as the network knows.

"Every time I tried to change the settings to the right year, Facebook always came back with an unknown error message and would send us right back to a year she wasn’t born in," her granddaughter, Gail Marlow, who has tried to contact Facebook about the issue, told WDIV. "I would love to see her real age on Facebook, I mean in April she’s going to be 105. It’s special."

When the 104-year-old attempts to change her birth date to 1908, it switches to 1928, according to the Associated Press.

Joseph, who currently doesn't have a birth year listed, notes Facebook's error on her profile.

"I was actually born on April 19, 1908 which makes me 102 years old but Facebook wouldn't let me enter in a date that goes back that far," reads the great-grandmother's "About" section, written two years ago when her Facebook page was first created. She later writes, "I am a wealth of knowledge and history and love to tell my stories." 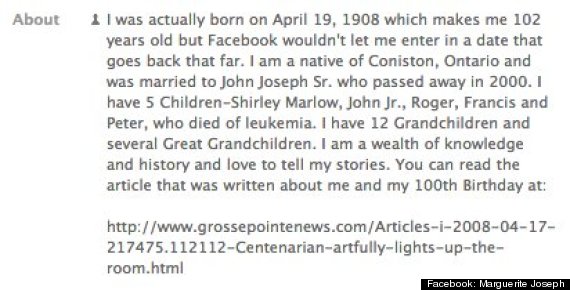 Due to her eyesight, Joseph has her granddaughter read and write her posts for her. She uses the social network to keep in touch with her family, including 12 grandchildren, and friends.

A Facebook spokesperson apologized for the error and is working to fix the malfunction of using pre-1910 birthdays, the AP reports.

"We've recently discovered an issue whereby some Facebook users may be unable to enter a birthday before 1910," Facebook said in a statement to The Huffington Post. "We are working on a fix for this and we apologize for the inconvenience."

The company and its founders are certainly aware of its older users.

In August, Mark Zuckerber and his sister Sheryl went to visit Florence Detlor -- a 101-year-old woman who was proclaimed Facebook's oldest registered user.