The so-called Maiden mummy of a 15-year-old Incan girl who was sacrificed 500 years ago is giving up some secrets, revealing the teenager suffered from a bacterial lung infection at the time of her death, scientists report Wednesday (July 25).

The researchers analyzed tissue proteins, rather than DNA, from the Maiden and another young Inca mummy who died at the same time.

Over the last decade, DNA techniques have proven useful in helping solve ancient mysteries, such as how King Tut died. But these techniques aren't without faults. For example, finding evidence of a malaria-causing parasite in King Tut's system doesn't necessarily mean the Egyptian king suffered any malaria symptoms. Additionally, the environment can easily contaminate DNA samples, if researchers aren't careful.

On the other hand, analyzing a sample's proteins, which are less susceptible to environmental contamination, yields a whole different set of information. "Being the expression of DNA, proteins really show you what the body is producing at the time when the individual is being sampled — or, in our case, at the time of death," study researcher Angelique Corthals, a forensic anthropologist at the City University of New York, told LiveScience. In particular, proteins can tell you if the body's immune system has activated to fight a disease, she added. [The Mummy Quiz: Test Your Smarts]

In their study, Corthals and her colleagues took lip swabs from two Andean Inca mummies, a 7-year-old boy and "the Maiden," as well as samples from the boy's bloodied cloak. The two child mummies, discovered in 1999, were originally buried on the summit of the Argentinian volcano Llullaillaco, 22,100 feet (6,739 meters) above sea level, after being sacrificed in a ceremonial ritual.

Past research found the boy and girl had been fattened up before sacrifice, being fed a typical peasant diet of potatoes and other common vegetables up until a year before their sacrifice, when evidence suggests they were given "elite" foods like maize and dried llama meat.

Once sacrificed, the freezing temperatures, among other factors, naturally preserved their fattened bodies. [Photos of the Inca Child Mummies]

"What I really wanted to do originally was see where the blood I found on the mummies' clothing and lips came from," Corthals said. "But we found a whole lot more than we were expecting."

Archaeologists also found a third mummy, a 6-year-old girl, along with the other two. This mummy appears to have been struck by lightning, which could potentially interfere with test results, so Corthals and her team didn't take any samples from it. 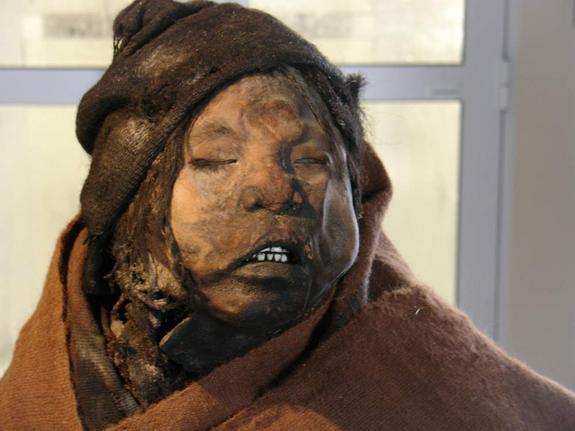 The three Llullaillaco mummies, including that of the 7-year-old boy (shown here), are preserved at Museum of High Mountain Archaeology (MAAM) in Salta, Argentina.

The researchers used a technique called shotgun proteomics. They placed their samples into a device called a mass spectrometer, which broke all of the sample's proteins into their constituent parts, amino-acid chains. Sophisticated software compared these parts with existing proteins of the human genome to determine the actual proteins in the samples, Corthals explained. "You couldn't use this technique for an organism that we don't have the complete genome for," she said.

They found that the Maiden's profile of proteins match that of a chronic respiratory infection patient. X-rays taken of the Maiden's lungs after she was discovered also showed signs of a lung infection. To see if the Maiden was harboring anything that could cause such an infection, they turned to DNA analysis and discovered evidence of bacteria in the genus Mycobacterium, which is known to cause upper respiratory-tract infections and tuberculosis (TB). Statistical models suggested the bacterium falls into the cluster group that causes TB, but the exact species isn't known, likely because its DNA hasn't been sequenced yet.

The Llullaillaco boy didn't have signs of disease or pathogenic bacteria.

The research shows that shotgun proteomics can play a critical role in determining the disease or death in archeological, medical and criminal cases, Corthals said, adding that the method may even be able to determine which pathogen is the killer in a case of multiple infections. For now, Corthals is interested in seeing whether the technique can be used with less pristine samples, such as skeletal material or Egyptian mummies.

Down the line, the protein technique's utility will likely go beyond just archaeology, researchers said. "I expect [the method's] biggest impact will be in criminal forensic science," Corthals said.

The new study is detailed online today (July 25) in the journal PLoS One.