Main Street, U.S.A. is America at the turn of the [20th] century – the crossroads of an era, the gas lamps and the electric lamp – the horse-drawn car and the auto car. Main Street is everyone’s hometown . . . the heart line of America. - Walt Disney 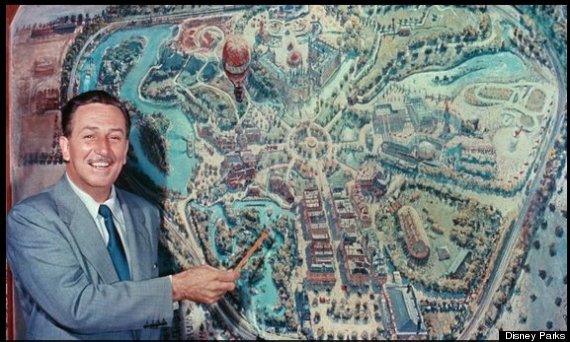 Disney stands in front of a rendering of the Park by Peter Ellenshaw during the premiere of "Disneyland" the television show, October 27, 1954.

Everyone who's visited Disneyland knows the familiar feeling of strolling down Main Street U.S.A., the park's opening act and, arguably, the most authentic and magical spot in the resort. Main Street opened with the rest of Disneyland in 1955, and little has changed since its very first day (well, except for the construction of course): 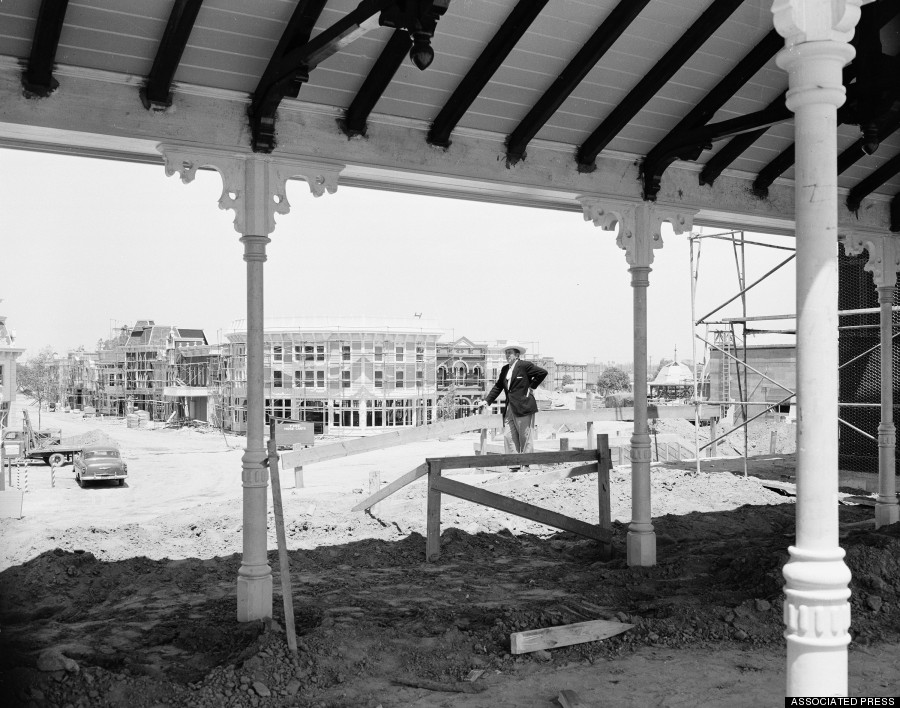 Now, Main Street is more than 60 years old and has entertained generations of Disney visitors. Yet still there are plenty of things many of us don't know about it. Which are the oldest buildings? Where did Walt live? And what's with the smell? HuffPost Travel turned to Disneyland representatives to find out more, behind-the-scenes details. Hopefully, the below will answer the many lingering questions you probably have about (one of) the happiest places on earth. 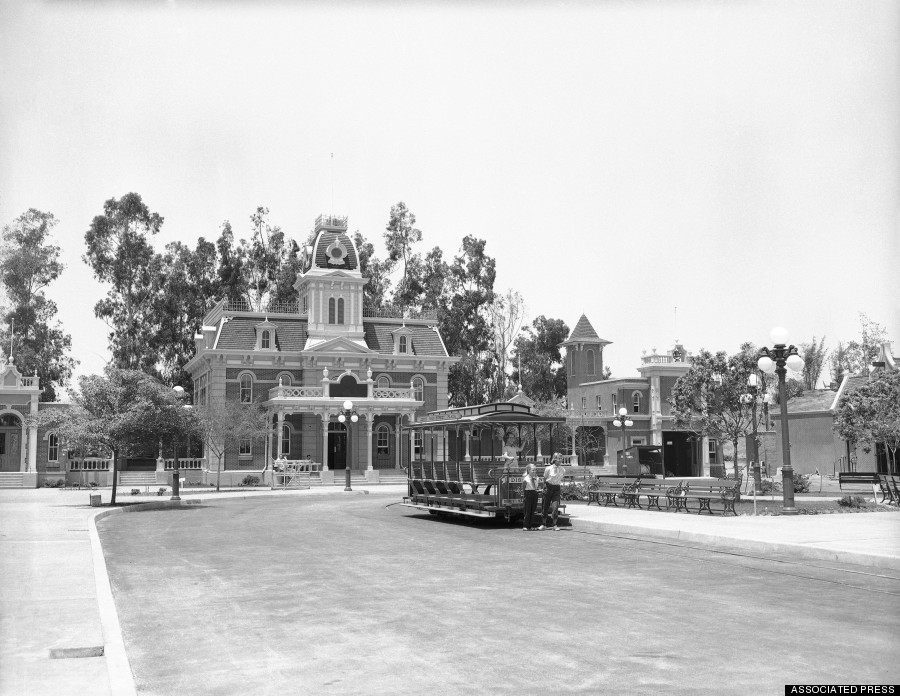 The City Hall on the edge of the city square would also be offices for the public relations department of Disneyland in California, June 7, 1955

1. The Mickey Floral, which greets guests, is one of the most popular photo ops in the world. The flowers are changed seven or eight times a year for the seasons and for holidays. The Mickey face holds approximately 32,000 individual plants alone.

2. The Dapper Dans barbershop quartet has performed on Main Street USA since 1959. 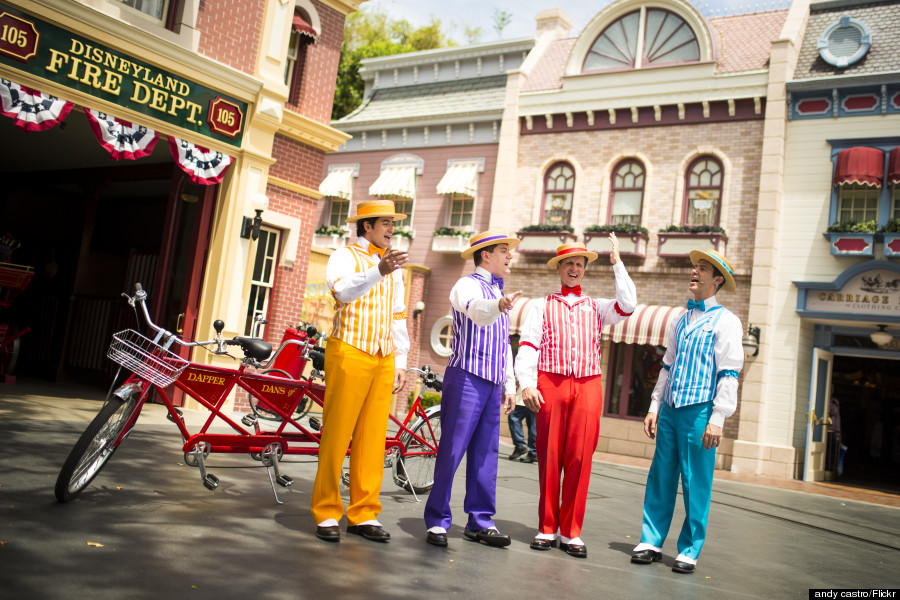 3. Disneyland has a definitive scent, certainly, but most of the time it's just from food shops. However, a representative from Disneyland did tell us that there is "some special magic" that happens during the holidays, when guests may notice a certain gingerbread scent.

4. Main Street, U.S.A. is the only original land at Disneyland that has not been significantly altered. It was famously partly inspired by Walt Disney's "hometown" of Marceline, Missouri. 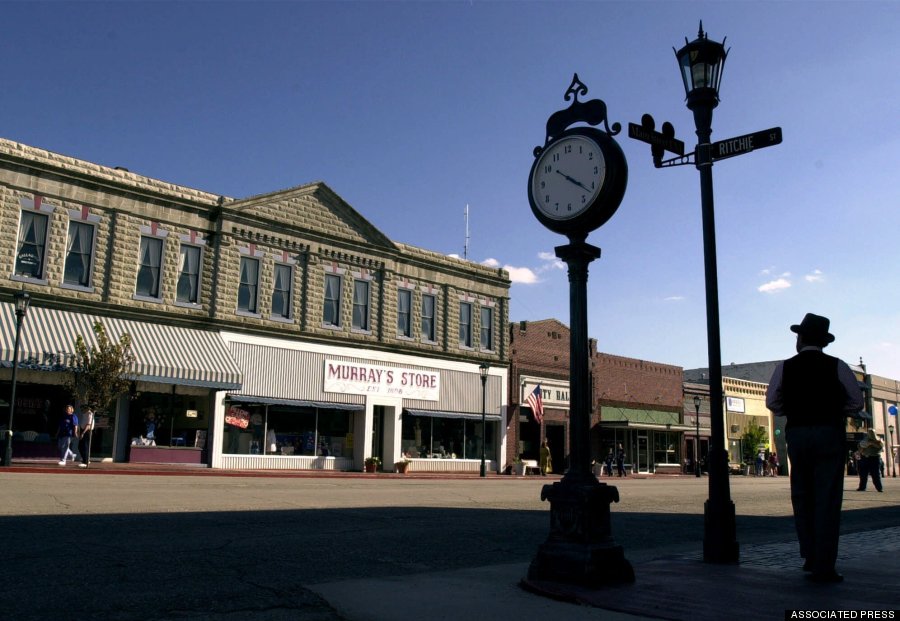 Above, downtown Marceline in September 2001 in celebration of Disney's birthday. This street served as a model for Main Street.

5. The Main Street Opera House is considered to be the oldest building in the Park, even though it wasn't originally the Opera House; it served as the Park's lumber mill until roughly 1961.

6. The places that have been open since opening day are: City Hall, The Emporium, Penny Arcade, Main Street Cinema and the Fire Department. The Candy Palace opened on July 22, 1955. 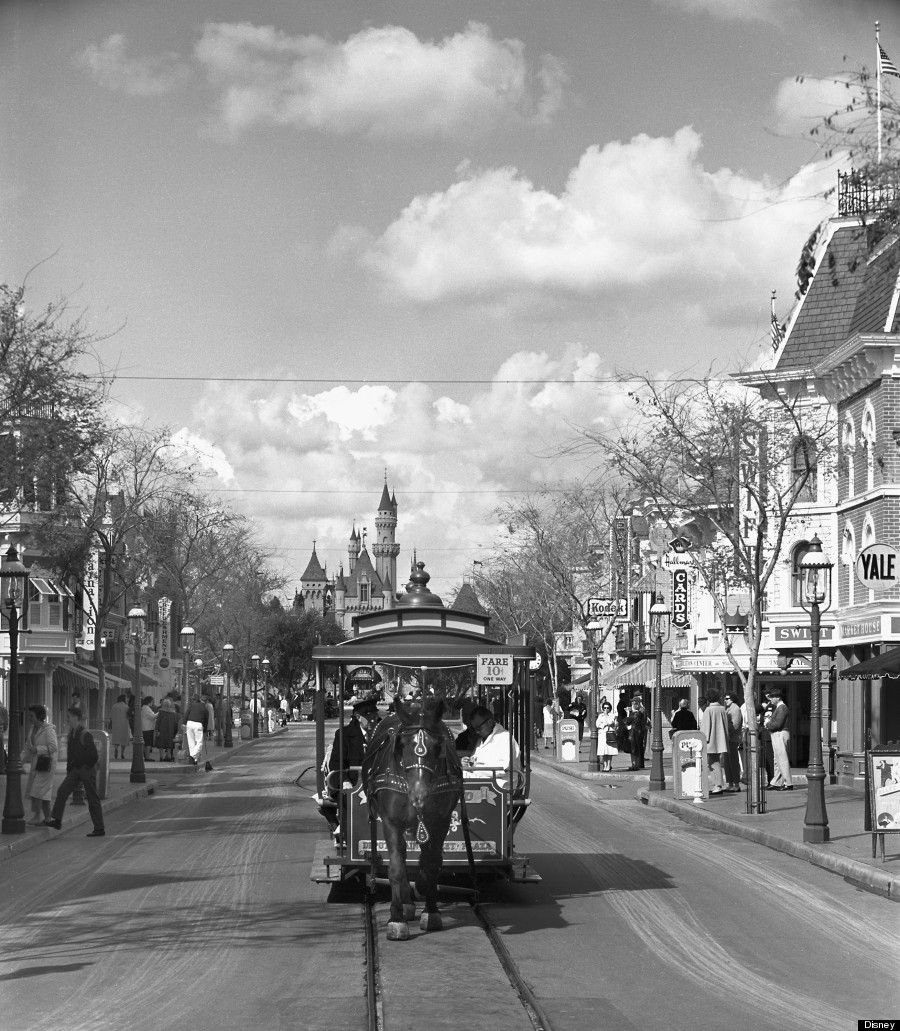 7. There are names of Cast Members, Imagineers and other important Disney figures written on the windows on Main Street. 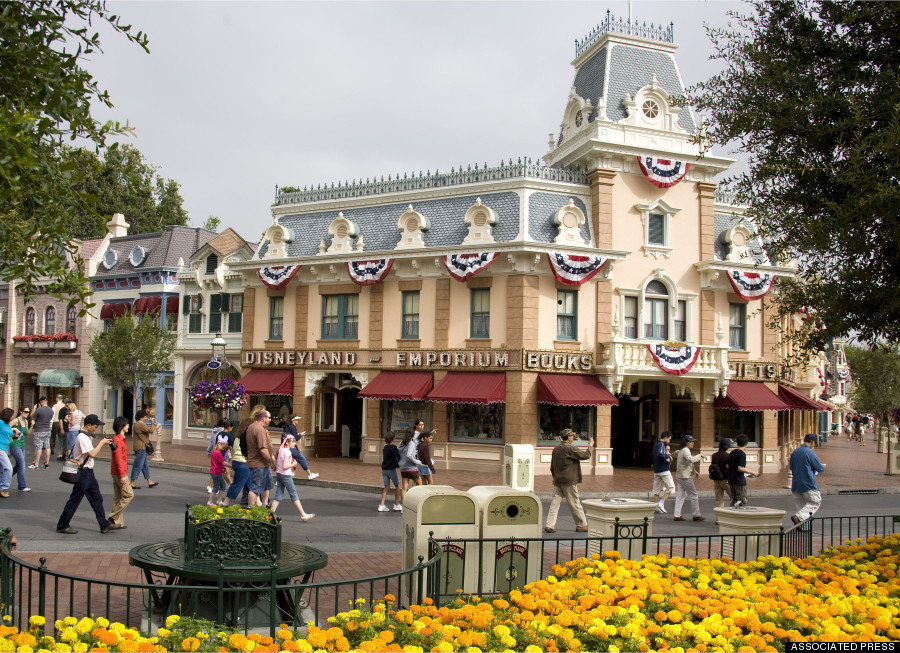 8. Above the Fire Station is Walt Disney's private apartment. A lit antique lamp in the window once informed staff when Walt was in residence. Today, the lamp remains lit as a tribute.

9. The Grand Canyon Diorama, which is featured along the scenic route of the Disneyland Railroad, is the longest diorama in the world: It's 306 feet long and 34 feet tall and covered in 300 gallons of paint. After all, Walt famously loved trains. As Kaye Malins, the curator of the Disney Hometown Museum told the St. Louis Post-Dispatch back in 2012, "I do not think it is a coincidence a train station was the first thing people passed at Disneyland when it opened. Walt loved trains." 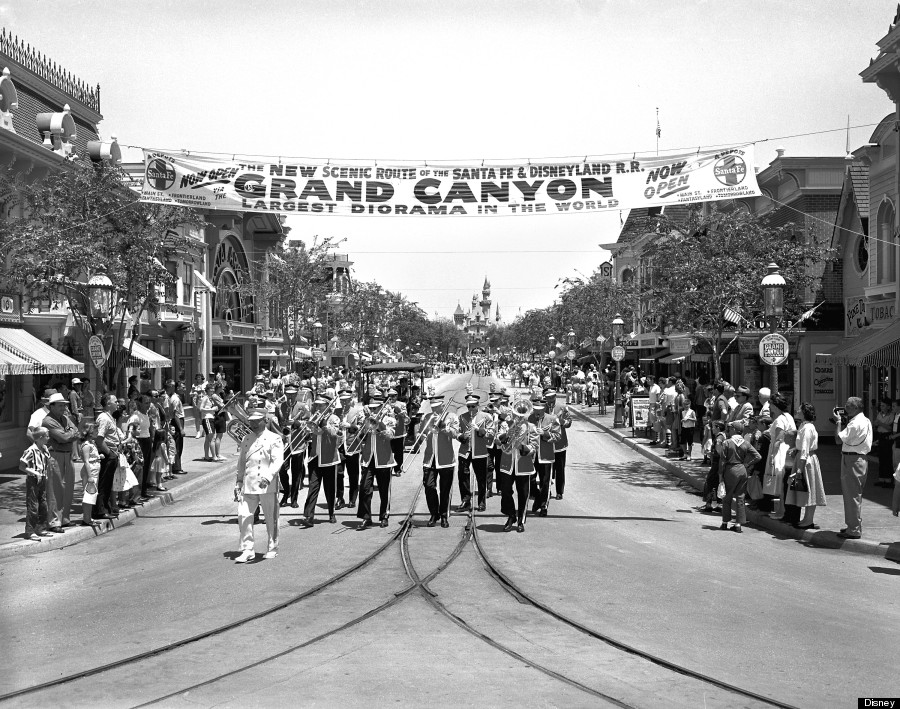 The Disneyland Band has been marching along Main Street, U.S.A., for nearly 60 years. This picture, from June 1958, shows the band under a banner to mark the opening of the Grand Canyon Diorama, which officially opened on March 31, 1958.

10. Steve Martin once worked at The Main Street Magic Shop. 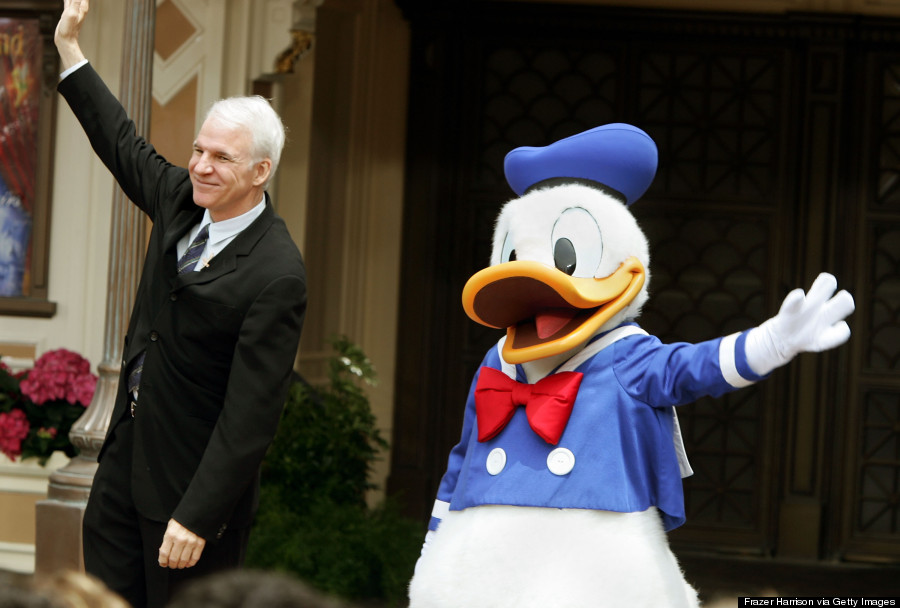 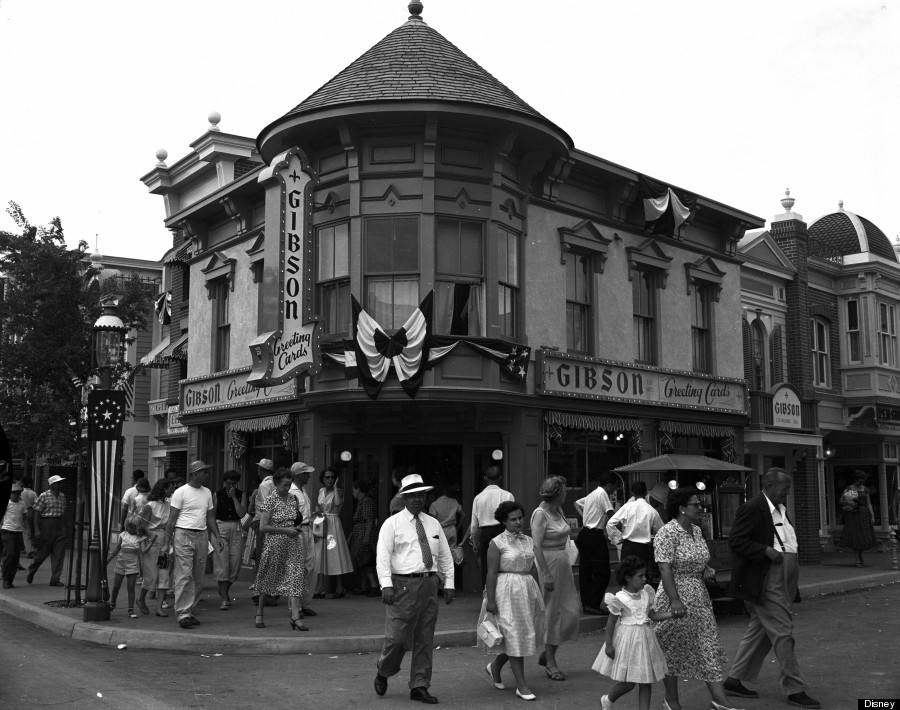 Sponsored by Gibson, Card Corner was one of the original shops along Main Street, opening with Disneyland on July 17, 1955, the same month this photo was taken. Gibson's sponsored the spot until 1960, when Hallmark took over the sponsorship until 1985.