WASHINGTON -- Governor Paul LePage (R-Maine) has sparked a fresh battle with the state's union community, ordering a mural at the Department of Labor (DOL) taken down on the grounds that the image is biased against business owners.

On Tuesday, Maine DOL Acting Commissioner Laura Boyett sent out an e-mail saying that after some complaints from businesses, the mural would be removed. Additionally, the state would be renaming eight conference rooms, many of which commemorate former labor leaders and one honoring the first female U.S. Cabinet secretary.

"We have received feedback that the administration building is not perceived as equally receptive to both businesses and workers -- primarily because of the nature of the mural in the lobby and the names of our conference rooms," wrote Boyett in the e-mail, posted by Maine blog Dirigo Blue. "Whether or not the perception is valid is not really at issue and therefore, not open to debate. If either of our two constituencies perceives that they are not welcome in our administration building and this translates to a belief that their needs will not be heard or met by this department, then it presents a barrier to achieving our mission."

Maine AFL-CIO President Don Berry issued a statement condemning the announcement, saying, "No matter what you name a room, no matter how many pictures you take down, the truth is that this state was built by and for working people and this move dishonors the generations of hard-working Mainers who came before us. Paul LePage cannot erase our history, and he will not silence the voice of the working class in Maine."

The mural, pictured below (from The Portland Press-Herald, Judy Taylor Fine Art Studio), depicts various scenes from Maine's labor history, including strikes in Lewiston and Jay: 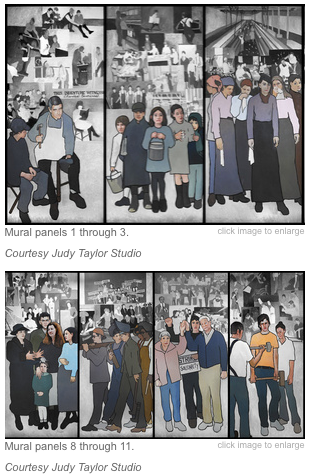 LePage Press Secretary Adrienne Bennett told The Huffington Post the governor's office is exploring alternative places to keep the mural, perhaps in the state museum, and believes they can move it without damaging the artwork. "We're not going to put an 'Open for Business' sign in the lobby either," she said when asked what would replace the painting. "It's going to be neutral."

"When you walk into our Department of Labor lobby, you see this mural, which is on several walls," added Bennett. "There's no getting around it. You see it, and it's there. The administration feels it's inappropriate for a taxpayer-funded agency to appear to be on one side or another. Clearly, the mural depicts one side. ... [W]e've got to make sure, as a Department and as a state government, we're representing all Maine people."

Judy Taylor, the artist behind the piece, took issue with Bennett's statement and stressed that there was no political agenda in her work.

"My response is that it's history, so it's not a present-day depiction of taxpayers," she said. "It's episodes pulled from history. So that, to me, is a very odd argument. Anybody that would be in a Labor Department, if they went 100 years back into their history, they would find episodes that aren't of reality today."

The mural was erected in 2008, as The Lewiston Sun-Journal notes, after the Maine Arts Commission chose Taylor through a jury selection.

Taylor also told The Huffington Post that the reactions she has received to her art have always been "very very positive" -- from both business leaders and workers alike. She noted at one point, a businessman told her he was particularly moved by the painting because it reminded him of his grandmother's stories about working at a textile mill.

LePage has been the target of labor protests in recent weeks, after he proposed raising the retirement age for some state workers and eventually capping cost-of-living adjustments for retirees in an effort to address the state's fiscal situation.

Maine state Rep. Diane Russell (D) traveled to Wisconsin last month to show solidarity with the labor demonstrators protesting Governor Scott Walker's controversial budget bill, which strips union workers of their collective bargaining rights. She explaining that "if the levees break in Madison, everyone gets flooded."

"It is on the backs of hard working people that companies make their profits," Russell told The Huffington Post in response the the DOL proposal. "That position deserves respect. It is not enough for conservatives to undermine the rights of workers across this country; now they are literally erasing them from the halls of history."

List of the rooms that are up for a name change: