"Cholera should not be spreading in Haiti." 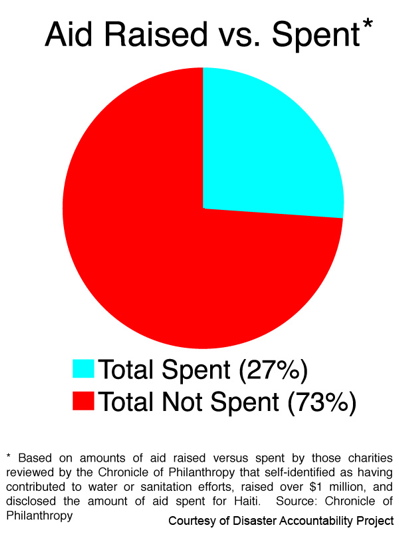 The Disaster Accountability Project (DAP) released an online petition today, targeting leaders of major disaster relief and aid organizations for failing to do more to prevent the cholera outbreak in Haiti ten months after a devastating earthquake killed up to 300,000 and left 1.5 million homeless. Major relief organizations raised billions of dollars, while telling the public that their relief efforts included water and sanitation work. With half of the funds raised still in the bank, DAP says that aid organizations failed to use the funds with the same urgency conveyed to donors, and that a cholera epidemic was avoidable.

Executive Director Ben Smilowitz says the failure of aid organizations to respond quickly to the epidemic is different from donor nations promising aid that never materialized.

"Donors have been duped. They generously donated in response to urgent appeals to save lives and help the people of Haiti after the devastating earthquake. Now, after billions in cash was raised, earthquake survivors are dying of cholera because conditions are so poor and the donated money is sitting in the bank. This is not what donors had in mind and it underscores the importance of transparency and accountability in relief and aid situations," Smilowitz said yesterday in a phone interview.

The petition targets the leadership of major aid organizations by name, accusing them of "not doing their jobs" and allowing the epidemic to become a major threat. Quoting the Chronicle of Philanthropy, DAP named major charities involved in sanitation and water projects.

When asked about the numbers, Smilowitz said, "These groups try to make their numbers look as impressive as possible. The bottom line is that aggregate numbers tell you very little about what an organization is actually doing on the ground. Programmatic oversight is almost non-existent."

"The international community and Haitian government failed to sufficiently invest in clean water and sanitation after the quake. Now, living conditions are so deplorable and infrastructure so poor, the situation is ripe for the cholera epidemic. The cholera death toll is expected to soar into the thousands," the DAP petition says.

The petition also quotes World Health Organization (WHO) documents which say cholera outbreaks are "closely linked to inadequate environmental management" and that "typical at-risk areas include peri-urban slums, where basic infrastructure is not available, as well as camps for internally displaced people or refugees, where minimum requirements of clean water and sanitation are not met."

Pan American Health Organization epidemiologists have said the disease has not peaked and will likely worsen and spread. 270,000 may be affected in the coming years. 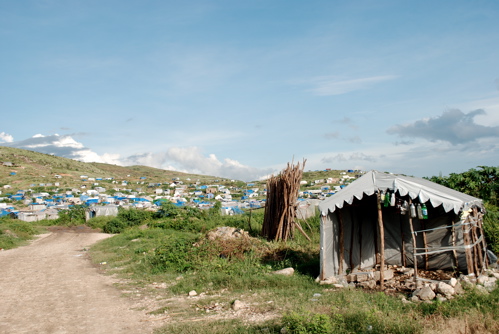 Tarp camps for Haitians displaced by the earthquake lack sanitation facilities and many do not have clean water.

On November 17, the Ministère de la Sante Publique et de la Population (MSPP) reported that the cumulative number of hospital admissions and deaths due to cholera as of November 15 as 18,382 and 1,110, respectively. Six months after the Haiti earthquake, Disaster Accountability Project released a report detailing a "shocking lack of transparency" in Haiti relief operations.

The Disaster Accountability Project (DAP) is a nonpartisan, nonprofit organization dedicated to improving disaster management systems through policy research and advocacy, promoting transparency and engaging citizens to become more involved in preparedness and relief, and helping to ensure that people know what is happening on the ground during a disaster.

DAP was founded in 2007 in reaction to the response to Hurricane Katrina.

A toll-free hotline (866-9-TIP-DAP) is available as a public service for disaster survivors, workers and volunteers to report critical gaps in disaster prevention, response, relief, and recovery services or planning.