Choked on a popcorn kernel when you saw the money Mughals walking down the red carpet in style? I did too, but let's be real, we approve. Yes, let that register in your pretty heads, Arianna Huffington and DJ Khaled showed up to the 2016 White House Correspondent's Dinner, and they stole the show while looking damn fabulous. So it definitely caught my attention and I am sure a few of yours, but one question remains, why?

So it turns out, DJ Khaled was invited to the dinner as a special guest at The Huffington Post table, and come on, it's not that surprising. This political year is all about campaigning on social media and creating viral moments from the dump Trump lunatics, Bernie Bird, Hilary's love for pant suits, to Ted Cruz's mid-debate booger conflict. DJ Khaled is a guy that knows how to take viral to another level (this is a man that made news blow up after releasing a video of himself opening a magnum champagne underwater for no evident reason), so this makes clear sense as to why Arianna and the rest of the HuffPost team would want to stand along the medial Mughal himself.

The lovely pair was seen to be one of the first to arrive at the event, and there's no doubt that DJ Khaled left out an interesting moment on Snapchat and Twitter. 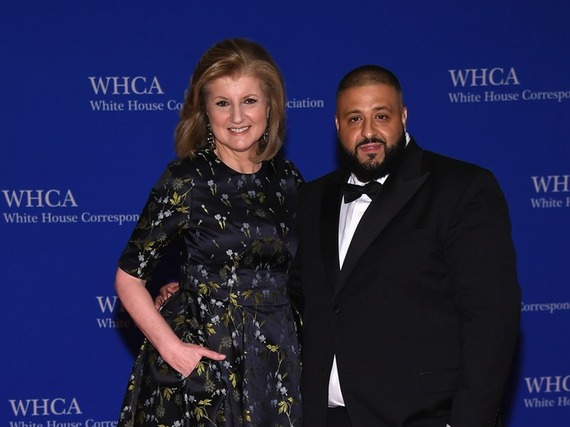 Major Key Alert, they killed it and looked absolutely glorious.