More than 40 years ago, a social science research group started asking Americans if they support the legalization of marijuana. For the first time, they do, according to new survey data first reported by The Washington Post.

Since 1973, General Social Survey has been asking Americans, "Do you think the use of marijuana should be made legal or not?" Back then, only 19 percent of Americans favored marijuana legalization. But in 2014, nearly 52 percent said they support legalization, with 42 percent opposed and 7 percent undecided. Last year's findings are a jump of about 9 percentage points from 2012, the last time the group asked the question.

Looking at data stretching back to 1973, it becomes clear just how much Americans' attitudes have shifted on U.S. marijuana policy since President Richard Nixon first declared a war on drugs. Marijuana became a Schedule I substance under the Controlled Substances Act -- meaning the Drug Enforcement Administration believes it has some of the highest potential for abuse and considers it one of the "most dangerous" drugs -- back in the early 1970s. The drug has been banned by the federal government since. 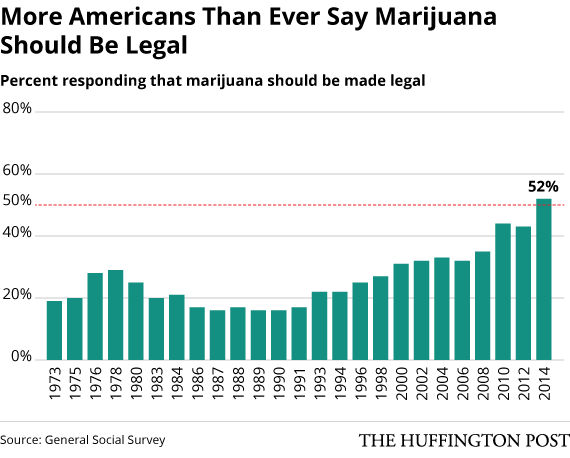 The data also show that support hasn't been consistently on the rise. In 1990, during the height of drug war hysteria, support for legalization hit an all-time low of 16 percent.

But from that point on, support for legalization made relatively steady gains and several states began loosening their marijuana laws. In 1996, California became the first state to legalize medical marijuana. A decade later, 10 more states had adopted similar laws. Today, a total of 23 states have legalized marijuana for medical purposes and four states, as well as the District of Columbia, have legalized recreational marijuana. By 2020, at least 14 more states are expected to legalize marijuana for recreational purposes.

“Americans are tired of laws that punish adults for using a substance that is undeniably safer than alcohol," Morgan Fox, the communications manager for drug law reform group Marijuana Policy Project, said in a statement. "The failures of marijuana prohibition are too obvious to ignore forever, which is evidenced by the growing support for ending it."

Kevin Sabet, president of anti-legalization group Smart Approaches to Marijuana, told The Huffington Post that while support looks high now, there could be a backlash as more states adopt new marijuana laws.

"The last Gallup poll showed a 7 percentage point fall in support for legalization between 2014 and 2013," Sabet said. "Though advocates won in three states last November, they lost in 26 out of 31 localities that were voting on whether or not to allow pot shops in their neighborhood. That tells me that legalization in theory gets more support than legalization in practice."