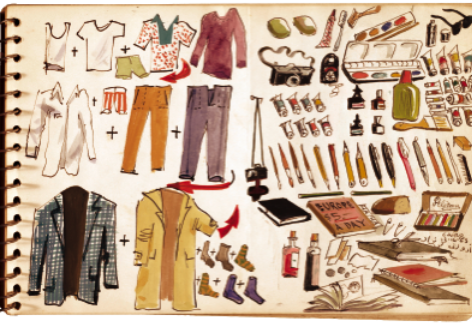 In December of 1963, realist painter Adolf Konrad planned to travel to Rome and Egypt, so he made a packing list -- not quite the kind of list you or I might make -- Kondrad's was a water-color painted into his sketchbook. On one page he painted all the items he planned to take with him, and on the next page he painted himself wearing only an undershirt and striped boxer shorts. The items he'd painted to pack looked like paper-doll cut-outs which could be cut and glued to his paper body. He included a t-shirt, sports shirt, undershirt, dress shirt, boxer shorts, two trousers, socks, a camera, sketch books, oil paints, watercolors, inks, brushes, pencils, chalk, and a copy of Europe on $5 A Day, into which he had inserted a note which read "Ha Ha."

The Konrad document is just one of over 80 lists now on view in an exhibition at the Morgan Library & Museum called "Lists: To-dos, Illustrated Inventories, Collected Thoughts, and Other Artists' Enumerations from the Smithsonian's Archives of American Art." The lists on view are funny, intriguing, revealing, and passionate, so get there before it closes on October 2nd.

You might wonder why the Morgan would mount an exhibit of "to-do's," paintings sold, appointments made and met, supplies to get, places to see, and people who are "in." The answer is, these are not ordinary lists. The exhibition is from the Smithsonian's Archives of American Art. It was installed by Morgan curator, Christine Nelson, and created by the Archives of American Art's curator of manuscripts Liza Kirwin. "While there are hundreds of thousands of lists in the Archives, scribbled on the backs of envelopes or in notebooks, they are often overlooked by scholars. Lists not only provide insight into the lives of the list makers and their times, but they are a form of documentation that everyone can relate to." 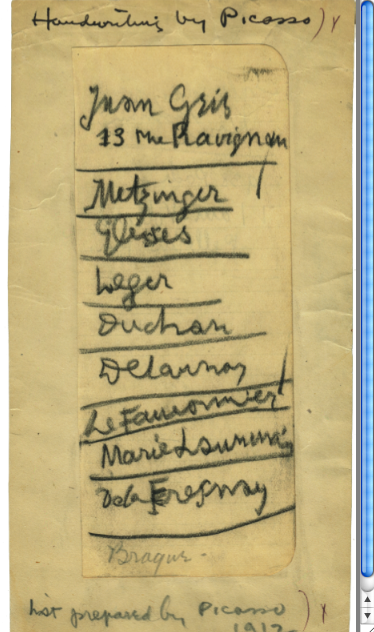 The lists include some from the greatest artists and thinkers of our age, including Picasso, who created a list recommending the great artists he thought should be included in the 1913 Armory show, the first international exhibition of modern art in the United States. The list, handwritten by the artist in large bold letters, included Marcel Duchamp (whose name he misspelled) Juan Gris and Fernand Leger. Curiously, the list did not include Georges Braque. Braque's name was later added at the very bottom of the list in smaller and lighter scrawl by Walt Kuhn, the artist assembling the show.

One list is an inventory of paintbrushes created by self-taught painter Arturo Rodriguez. He not only drew all his brushes but also wrote down their respective properties, describing them as round, flat, bright, and round bristle; and then divided them by groups: liners and stripers, bristle brushes, varnish brushes, etc.

In 1932, the year after he completed his iconic painting, American Gothic, Iowa artist Grant Wood, who experienced the economic instability of farming first-hand, made a chronological typewritten list of thirteen economic depressions, beginning in 1819. His last entry, "1931 & 32" includes the typed words, "ALL CAME TO AN END EXCEPT THIS ONE.MEBBE (sic) THIS WILL...." 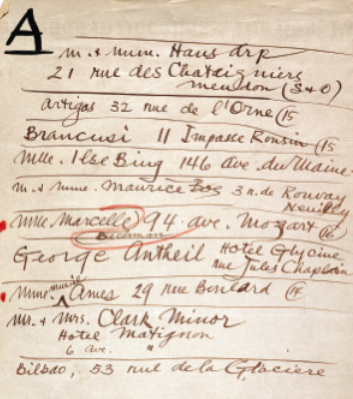 Alexander Calder's miniature reproductions of a circus, is one of my favorite works of art, and I often go to the Whitney to see it. The Morgan exhibition includes a page from Calder's handwritten address book from 1930, with contact information for Brancusi, German photographer Ilse Bing, and American composer George Antheil, among others. 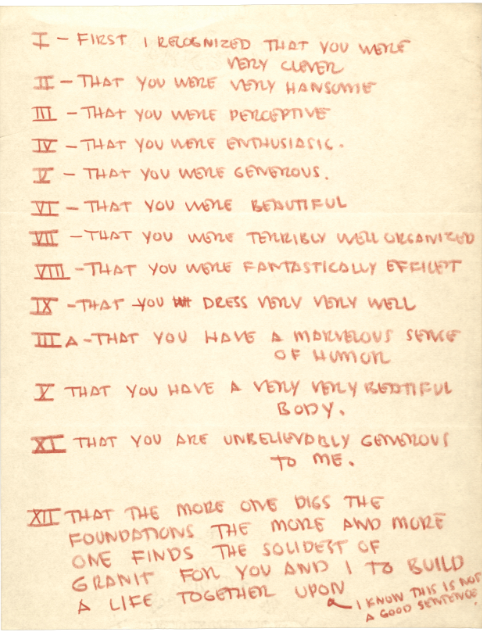 The most romantic list is from Finnish-born architect Eero Saarinen, who designed the TWA terminal at JFK, and the Gateway Arch in St. Louis. He fell in love with his second wife, Aline, an art director and critic for The New York Times. Just before they were married in 1954, Saarinen wrote out twelve of Aline's most positive traits. The last one reads: "That the more one digs the foundations the more and more one finds the solidest (sic) of granit (sic) for you and I to build a life together upon." There is an arrow pointing to that last line, and the words, "I know this is not a good sentence." And certainly not a great way to end such a romantic love list.