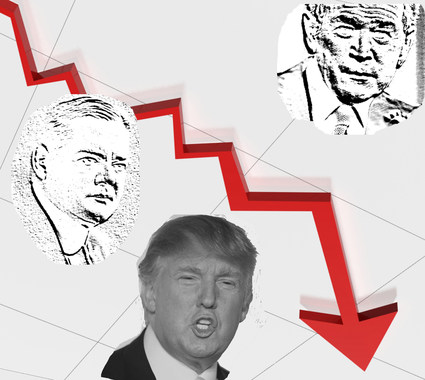 In tonight's debate and throughout the remainder of the campaign, Hillary Clinton should take direct aim at the economic plan Donald Trump announced in a recent speech at the Economic Club of New York. It is a blueprint for an economic cataclysm on the scale of what almost happened in 2008 and what did happen beginning in 1929.

Here is a summary of the Trump program in slogans:

Slash Taxes on the Super Rich!

Reduce Regulations on Banks and Corporations!

Bring on Another Great Depression!

This man who presents himself as the champion of the working man (an absurd claim, given Trump's lifelong business record and his complete lack of concern for those he classifies as "losers") is doubling down on trickle-down, and the result of implementing his proposals could not be other than to take the economy and the middle- and working-classes down, down, down.

The Failed Policies Of The Past

As an historian of the Great Depression (I have written or edited five books on the era), I can state unequivocally that the policies enunciated by the Republican presidential nominee are essentially those pursued by his party in the 1920s and under the administration of George W. Bush that led directly to the two worst economic collapses in more than a century -- the Great Depression and the so-called "Great Recession." In fact, his proposals are to repeat the mistakes of the past, but to an even greater extent than the second President Bush did.

The most basic cause of those past economic disasters was a concentration of wealth and income at the very top and a lack of sufficient regulation of financial institutions. When too much of the nation's income is in the hands of a very few, there is not enough spread among the bulk of the population to maintain sufficient demand -- the level of purchasing needed to keep a consumption-based economy afloat. Mr. Trump proposes not only to repeat the failed policies of the 1920s and early 2000s, but to offer even bigger tax cuts for the super-rich than Mr. Bush did.

Mr. Trump has consistently shown himself to be immune to facts and unwilling to accept scientific evidence (as in his labeling of climate change as a hoax). For those who are susceptible to evidence, here are a few facts that are relevant to what he is now proposing (of course there were other factors in addition to tax rates involved and this is an oversimplification, but the pattern is striking):

In 1925, Calvin Coolidge and Treasury Secretary Andrew Mellon pushed through a reduction of the top tax rate to 25 percent. By 1928, the richest 0.01 percent of Americans were taking on almost 6 percent of the nation's income. In 1929, the economy collapsed.

In 1993, when President Bill Clinton proposed a modest increase in the top tax rate to 39.6 percent, Republicans predicted economic disaster and every Republican in Congress voted against it. Over the following years, the "disaster" turned out to be one of the greatest periods of prosperity in American history and a federal budget surplus.

In 2003, President George W. Bush got the top rate lowered to 35 percent. The federal surplus vanished and enormous new debt was run up. By 2007, the richest 0.01 percent were again taking in 6 percent of the income. In 2008, the economy collapsed.

When President Obama took office in 2009, the top rate was returned to 39.6 percent, a stimulus package was enacted, new financial regulations were put in place, and the economy began a slow recovery that has now resulted in the largest gain in median household income since records of that statistic began to be collected in 1968.

What, then, does Donald Trump propose? To cut the top tax rate to 33 percent, lower than the 2003 Bush tax cut -- and to combine that with other giant gifts to the richest Americans, including the elimination of the estate tax, which only affects the very rich, slashing the corporate and capital gains tax, reducing regulations...

Then there is Trump's anti-trade policy, which threatens to slap huge tariffs on foreign-made goods. While it was not the principal cause of the Great Depression, one of the factors in exacerbating the economic collapse of the 1930s was the choking off international trade through the Smoot-Hawley Tariff Act of 1930 and subsequent actions by the United States and other nations. Trump's economic nationalism and general "America First" attitude adds to his prescription for a new economic collapse.

In the midst of the Great Depression in 1932, Franklin D. Roosevelt famously called for "bold, persistent experimentation" and said "It is common sense to take a method and try it: If it fails, admit it frankly and try another. But above all, try something."

Donald Trump's approach is bold persistence in doing what has completely failed every time it has been tried in the past. The bottom line of his economic speech can be accurately translated as:

To borrow lines from Pete Townshend, "Then I'll get on my knees and pray / We don't get fooled again."

NOTE: This piece was first published in a slightly different form in the New York Daily News.

Robert S. McElvaine teaches history at Millsaps College, is the author of The Great Depression, and is currently completing a book on America in 1964.