It's extraordinary what a difference 48 hours can make. But, the fate of our planet has considerably worsened since the wrath of the American public ushered in Donald J Trump as their 45th president.

Having secured not only the White House, the Donald will also control the House and Senate, and the Supreme Court. A man you can bait with a tweet not only has access to Amerca's nuclear codes, but he has also been given the green light to pass a dizzying array of measures.

Whether he seriously plans on deporting millions of immigrants, building that ridiculous Mexican wall, muzzling the press or jailing his arch rival Secretary Clinton remains to be seen.

And, while all of these things are worrying unto themselves, it's his stance on the environment which perhaps is the most alarming. At the risk of sounding melodramatic, the whole of posterity and humanity now hang in the balance.

On Wednesday, after bickering with the Apprentice star throughout the whole election, the speaker of the House Paul Ryan stood firmly behind the president elect and promised to favour the economy over all environmental issues.

Trump's climate policy can essentially be summed up by one line: it's a ridiculous hoax cooked up by the Chinese to make America less competitive. 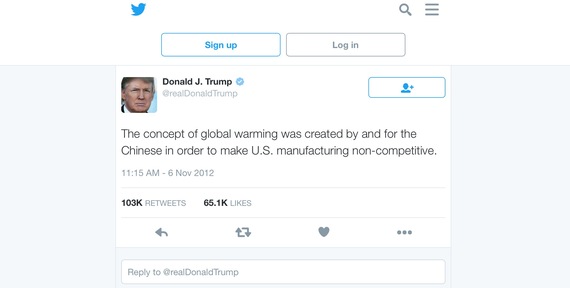 But, don't worry, for the Donald has promised 'To Make America Great Again." The question is: how does he propose to do this with a parched planet?

As 2016 shapes up to be the hottest year on record, scientists are now warning that temperatures are poised to breach the 4 degrees Celsius mark before the turn of this century. And, while this may not sound like much, its the difference between now and the last Ice Age which ushered in a mass extinction event.

Barack Obama's hard won climate legacy has never looked so vulnerable. It's like a little innocent lamb trapped in the GOP slaughterhouse surrounded by Republicans all baying for blood.

Timing is a funny thing in life, but it is key.

The Paris climate deal struck last December, the product of over 20 years of negotiations, only legally came into effect last month. International legislators, including the Obama administration, have worked very hard to protect it in the event of a Trump presidency.

During the campaign trail, the property mogul promised to scrap Obama's signature Clean Power plan, the main platform from which the U.S. will rein in its greenhouse gases. The question now of course is: can the reality TV star realistically reverse all of his predecessors' hard fought efforts?

Ségolène Royale, the French environment minister who helped to draw up the accord said that the US could not withdraw from the treaty that easily: "The Paris agreement prohibits any exit for a period of three years, plus a year-long notice period, so there will be four stable years."

So, as long Trump fails to win a second term, the Paris treaty is presumably safe.

According to Alden Meyer from the Union of Concerned Scientists:

"If the US pulls out of this, and is seen as going as a rogue nation on climate change, that will have implications for everything else on President Trump's agenda when he wants to deal with foreign leaders. And I think he will soon come to understand that."

Earlier this month, China criticized Trump's disregard for the Paris deal. And, whilst that may only feed into his paranoia that global warming is indeed a great Chinese conspiracy, ironically, perhaps it will be his desire to compete with the world's second largest powerhouse to 'Make America Great Again' which will change his mind

After all, the clean energy revolution is now unstoppable: "If Mr Trump chooses to disengage then he will hand the next industrial revolution lock, stock and barrel to the Chinese," said Friends of the Earth's chief executive officer, Craig Bennett.

Beijing acknowledges that it needs a green energy revolution to not only to clean up its air pollution, a major source of social discontent, but also to drive growth and employment as the Chinese economic miracle begins to taper out.

According to Lux Research analysis, a Trump reign will increase U.S. carbon emission by 16% by the end of his second term, presuming of course that he makes it that far. Not only will this push the planet towards catastrophic warming, but it will push other nations to follow suit.

The end result: a future plagued by floods, droughts and extreme temperatures. For anyone who has children, one can't help but despair: what kind of living hell we will be handing over to them?

Forget the food riots which ignited the 2011 Arab Spring. That will seem a like a bedtime story compared to the bloodbath that will ensue after people start fighting over dwindling supplies of food and water. According to the head of the World Bank, such conflicts will breakout within the next 5 years.

President Trump, as a father and grandfather, is this really the kind of world you wish to bequeath to your children and their children?

Green groups have already started calling on the president elect, arguing that he has a right to protect the people that he serves from climate chaos. But, will such pleas fall on deaf ears?

If there was ever a time to stand up for planet earth, that time is now: "Let's use this moment to reenergize the fight for the climate and the fight for human rights around the world, " said Annie Leonard, executive director of Greenpeace US.

Now is not the time to wallow in despair. Our children and their children need us more than ever. Yes, Trump is a huge set back. But, the road towards justice has always been both long and winding. One man with a bad toupee and orange peel tan will not stand in our way.

Much like the abolition of slavery, apartheid and universal suffrage, great change is possible if brave men and women stand up and say enough is enough. America elected a man of mixed race into the White House, not once, but twice. We have come a long way, and we have even further to go. Each one of us is a powerful agent of change, and united, we are unstoppable.

As the great Martin Luther King once said: "We are all caught in a inescapable network of mutuality, tied in a single garment of destiny." No where does this ring more true than with our common need to protect our shared climate. After all, "although the arc of the universe is long, it does bend towards Justice."