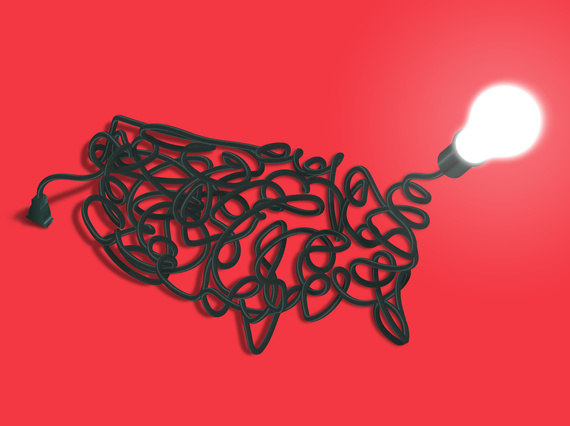 Allow me to begin with the truth. I've never studied political science, run for public office nor held a position in government. For the last forty years I've led a design agency working with enduring brands across the globe. As with any experienced person in my profession, I have used research, deductive reasoning, logic and "design thinking" to solve complex problems and create opportunities. Great brands that are showing their age turn to our agency to get back on course. In this light, I believe American democracy is a prime target for some retooling.

During this election season we have seen the ugly underbelly of American democracy with two polarizing candidates that were selected in the primaries by a mere 9% of the electorate. This shameful turnout suggests a damaging level of national complacency. If this were a global brand, any design consultant would say that customer satisfaction and retention were at serious risk.

The present campaign cycle has left many voters wondering how such divisiveness and national embarrassment could be happening in the land of the free and home of the brave. This could be viewed as symptomatic of deeper structural problems in our tradition bound 240 year-old democracy. Great brands operate on a "innovate or die" model to insure success. The continual improvement of how a business operates and adapts to market conditions is a sound and critical practice.

Although the current election frenzy will soon be over, I want to examine three challenges to our election process and propose possible solutions for consideration. I'll use the same diagnostic thinking I use with major corporations:

In 1947 the four-year presidential term, with a maximum of two consecutive terms, was ratified in the Twenty-Second Amendment. This was a reaction to Franklin Delano Roosevelt's unprecedented three-term presidency, which re-ignited the founding fathers' initial fear of extended government rule by "kingship."

Design thinking suggests that these term limits result in marginal ROI. Once elected, a president has two "functional" years before campaigning for a second term becomes a distraction. If re-elected, the pattern begins again, two functional years and then "legacy building" becomes a drain on overall efficacy, depriving the American public of a devoted leader focused on the important issues facing the country, for fifty percent of the term.

Consider a system that is based on a five-year, non-consecutive presidential term rather than four years. This would create an environment of productivity allowing the president to focus attention on doing the job without the distraction (and political rancor) of re-election. If s/he wishes to serve again, s/he can run five years later, after their successor's term in office.

What's with voting on Tuesday? According to Wikipedia, in 1845, the United States was largely an agrarian society. Farmers often needed a full day to travel by horse-drawn vehicles to the county seat to vote. Tuesday was established as Election Day because it did not interfere with the Biblical Sabbath or with market day, which was on Wednesday in many towns. That was 171 years ago when the US population was under twenty million, there were twenty-six states, baseball's rules were first written and Irish immigrants, fleeing a potato famine, poured into this country.

Despite the Voting Rights Act of 1965, scheduling Election Day on Tuesday is now largely seen as a voter suppression strategy aimed at controlling the outcome of an election. It directly affects the disenfranchised, poor, and workers who are inconvenienced by taking time off from their job.

The good news is that currently thirty-four states allow early voting. This is a sensible solution that should be applied universally. Weekend voting would allow for both spiritual and civic commitments with plenty of time for Sunday football.

As for voter registration, twenty-nine states are exploring measures to allow people to register to vote when they interact with other government organizations, such as the Department of Motor Vehicles. In Australia, voting is mandatory, insuring the broadest representation of voter choice. We may not need to go that far but a better-designed voter registration process would allow for more inclusivity and fair representation.

Our country's insanely long election process is a wasteful drain on time, money and the national psyche. It begs the question of whether political campaigning and funding should be more restricted by law. Our North American neighbors are a bit more disciplined. Canada elected its brainy Prime Minister, Justin Trudeau after only eleven weeks and Mexico limits its process to 147 days. I realize that these are parliamentary systems but they seem refreshingly efficient compared to Ted Cruz announcing his candidacy 596 days before Election Day.

The United States prides itself on its "exceptionalism." In many respects we are the global example but in this case we are "exceptionally" backward.

Consider the benefit of a government funded, six-month campaign season, primary included. Each qualified candidate would be given an initial budget of 25 million dollars with a 4x-matching cap built on individual (non-corporate) donations of $25.00.

Obviously, the economic impact of such a prudent model would be devastating to the enormous political machine that revs its engines every election cycle. The advertising, design, PR, market research and communications industry would be particularly hurt. However, all of these professions understand that time and money are valuable assets to every business and are accustomed to working within defined financial limits. Fiscal responsibility and careful budgeting by corporate leaders is expected and demanded by shareholders. Why doesn't our electorate insist on the same requirements during a political campaign? Are we not "shareholders" in the future success of our country?

In June of this year I attended the annual leadership conference of AIGA, the professional association for design, in Raleigh NC. A provocative question posed to a select group of designers was "What would you do if you were Secretary of Design." The responses addressed issues concerning positive social change, education and Veteran Affairs. The audience was full of several hundred trained professionals whose everyday problem solving methods encourage divergent thinking to explore many solutions (possible or impossible) and then use convergent thinking to select and realize the best resolution. This is the very definition of "design thinking." That leads to progress.

Our country's leaders could benefit from giving the "design of democracy" a hard look. The same design brain trust that places the United States at the forefront of innovation has no fear of complex challenges, no matter how daunting the task. A Cabinet post not withstanding, designers are more than willing and able to keep America great.