The theme for International Women's Day this year was make it happen. It's a call to action. For me, it's also a powerful reminder that sisterhood is not about membership; it's a relationship -- an active, radical, empathic bond based on shared experiences and concerns. And it isn't singular. Women share all kinds of "sisterhoods" -- connections based on day-to-day life interactions.

I remember being taught as a child that food, shelter and clothing were necessary for survival. Everything else was want -- and it was optional. It informed my view as I learned to navigate the world, deciding who needed or wanted me in their lives.

My own journey beyond the boundaries of selective sisterhood required a new understanding of the difference between sympathy, empathy and compassion. My definition of "need" was forever altered in the process.

Each day at my office, I spoke briefly with a young lady who was part of the welfare to work initiative. She was pregnant and I would offer the obligatory, "How's it going today?" as I passed by the front desk, often with my mind already onto what I had to accomplish.

As her due date grew closer, I found myself lingering a bit longer to make conversation. I soon discovered she had moved into a public housing project from a homeless shelter with her daughter. She had no family, few friends and a spirit of survival that was simultaneously awe-inspiring and depressing. Her eyes seemed to say, "I'm in this alone but that is where my spirit lives -- here in isolation as I focus on survival."

One day, I asked who would take care of her little girl while she was giving birth to her son. She wasn't sure; staff at the hospital she hoped. As I learned more about her past, my own spirit began to weep for all she had already survived and all that was to come. So many aspects of her narrative echoed my own. I began to see that without someone reaching out to me at different points in my life, her story would have been my story.

There would be no baby shower; no freshly painted nursery filled with all of the things you need and want when you bring a new soul home; no postpartum meals delivered by a sister, aunt, mother or grandmother.

At this point, I had moved from sympathy (that distant feeling of sorrow for the challenges of another) to empathy (I am feeling your pain deeply as a woman, a mother, a sister, a friend.) The next stage was what I call level one compassion; that uncomfortable feeling that tells you to DO something -- anything. Just make it happen. 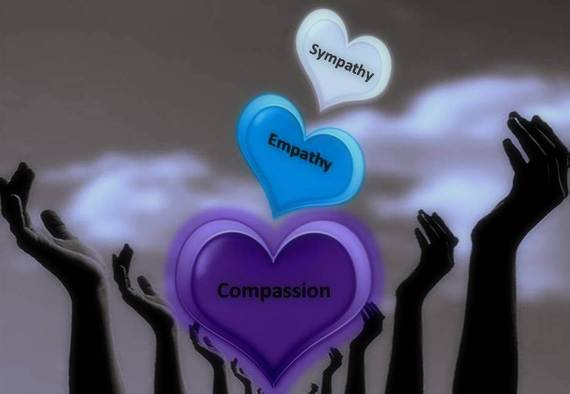 The search for available resources consumed me. I guess I thought someone will handle this, it will be okay. Self-serving guilt was driving the bus and I was pulling the cord hoping to reach my stop.

I hosted a baby shower, gave her a book of pictures and drove her home with the gifts. There we go, all done, right? I did my good deed for the day, so now I could sleep peacefully. After all, I had two children at home under the age of three, a full-time job and only 24 hours in a day.

Level two compassion arrived in a fury. It kicked me in the face and my soul started issuing the directives. I couldn't sleep imagining a two-year-old girl who had gone from a homeless shelter to the projects being passed around the hospital by strangers when her mother went into labor. Her plan for transportation to the hospital was the bus. At this point, it was still about me. I didn't realize that at the time -- but it was.

Finally, I heard myself saying, "Hey, how about your daughter come stay with my family while you are in the hospital?" That seemed simple enough and I could quiet that still small voice whispering in my ear, "I told you to dig deep and DO something."

The voice kept calling me, growing louder each day, and making me question who I was. Did I really believe everything I professed? Or was it just lip service? Did I have what it takes to actively and willingly entwine my life with a stranger in a way that would bring inconvenience and discomfort? My "yes" would turn my life inside out in ways I couldn't even imagine.

Ultimately, I decided to convert our family room into temporary housing for an expectant mother I hardly knew and her two-year-old daughter; newborn son made three. A c-section with major complications turned what I envisioned as a short stay into something I wasn't prepared for -- wound care twice a day, meals to be prepared, medications to dispense and four children under the age of three in my small house. I was married at the time, and there are days I still wonder if that wasn't step one to my divorce. To his credit, my ex-husband cautiously supported the decision and earned my permanent respect.

A circle of women also gathered to assist me in ways that will forever keep me humble. They jumped into action taking shifts when I had to go to work, bringing food and letting me cry on their shoulders when the stress took over.

I have never felt anything more powerful than that sense of unity and protection. Actually, I have -- the feeling I had when that precious baby boy held onto my finger shortly after delivery. I had the privilege of being there the moment he took his first breath and though I didn't give birth to him, he became my child as well and began living in my heart. So did his sister, his mother, and every woman who pitched in to make sure he had the best start possible.

Life is about more than survival. It's about new beginnings, empathy, celebration, advocacy, unity, support and empowerment. We all need that.

Your destiny is intricately tied to that of every other person you encounter. That woman to woman experience eventually inspired me to start a nonprofit called Because We Are Sisters. The name was simply an answer to the question, "Why did you do it?"

Sympathy is safe; empathy is hard; true compassion is not something you feel, it's something you do. Care, commit, connect, cause -- and make it happen.