New Year's Day is probably one of the most optimistic days of the year. Like most folk, you are ardently deciding to scrape off the crap that shellacked your otherwise golden year, and begin all Au again.

It's a good day to start, but why do you need an arbitrary holiday to do that? For most people, it doesn't work.

I purposely have no New Year's Resolutions. I know that after a few weeks, they will fall out of my head. Instead, I post sticky notes to myself on my bathroom mirror to remind me what my timeless resolutions are: be a better mom, better teacher, person, writer, artist, in shape, smart. 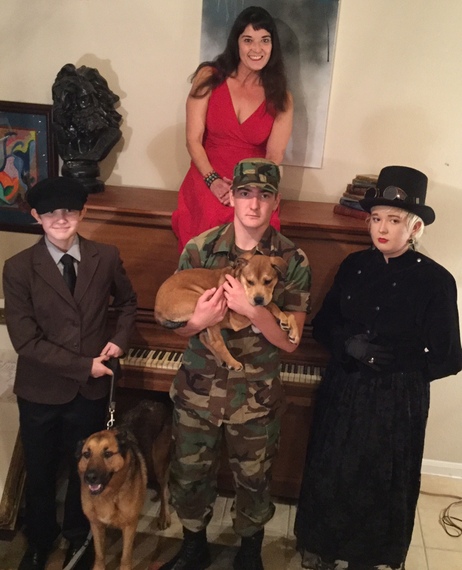 So far, in the last year, this has worked for me. I went from an anonymous elementary school science teacher to a Huffington Post blogger, and artist.

A soothsayer, five years ago, could have told me what my life would be like today. I wouldn't have believed them. In Spanish, I would have said they were full of caca.

You never know what life will bring you. So, a New Year's Resolution, in my opinion, is caca.

I challenge you to make life resolutions, instead. They take time, and are more meaningful. Science has shown that meaningful lives give more joy than instant happiness.

We all have the potential to live a kinetic life, we just have to want to do it and actually achieve it. Say less. Do more.

One of my life goals that I have achieved is not to be bored. I got this goal from a friend of mine, best-selling author, Jeff Guinn. My holiday photo here reflects that.

It is not the stark family photo of us fake smiling. It is of us as we are today in color and costume that reflects our personalities. I told my kids, "You will never be bored."

Be you in all of your glory.

I don't know what that is for you. You have to decide. It could be being a better neighbor, friend, giving a compliment to someone daily, or even finding homes for abandoned reptiles.

And there is a place for that. Sam Makki does this now in California. He helped form Reptile Rescue Orange County in 2008, an organization to adopt reptiles. Now, they have a public adoption agency for homeless reptiles that includes snakes and turtles.

Yes, Virginia, there is a home for your reticulated python.

"I saw a need for a rescued reptiles organization," Makki said. "They are always shed in a negative light. But, they're not really."

Now, they have a public place for adoptions that includes about 30 animals in California, including a reticulated python.

"Usually my New Year's Resolution is to hit the gym more, eat better like most people, but it goes out the door in a week or so," Makki said.

Instead, he aspires to help more animals annually, and so far, he has done that.

Do what you can in your own corner of the world to make it better.

Mahatma Gandhi is attributed with saying, "Be the change you wish to see in the world." Although there is no empirical evidence that he said this, it is on a crap-load of bumper stickers on mostly bad cars.

I would change it to say, "Be the change you want to see in you." Do it a little at a time, make these goals achievable. Make them with purpose and worth.

Don't surround your resolutions by an arbitrary holiday that makes them unachievable. Don't set yourself up for disappointment or failure.

Find the joy and meaning in life, in all you do. It is there. You just have to see it and want to grasp it.

Be an evolution of revolution throughout the year and remain resolute about it.

I am a mama, science teacher, writer, and artist. I do not collect spoons or ceramic cats.