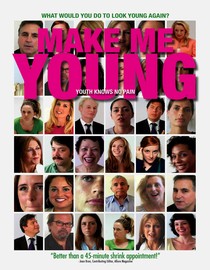 With people out of work, the economy in a slump, and competition for jobs at a premium, is staying visibly younger the solution to surviving in the contemporary job market? This is one of many explanations offered for the American obsession with staying young, presented in the documentary Make Me Young: Youth Knows No Pain.

Filmmaker Mitch McCabe follows several story threads in her film. As the director and producer, McCabe embarks on a two-year cross-country examination of the anti-aging industry--a $60 billion per year market. It isn't all LA and New York centric. One of the main characters profiled is 53 year-old Sherry Mecom, a Dallas resident. She connected with McCabe by responding to a Craigslist ad asking, "Want to talk to a documentary about your thoughts on aging?" We see Mecom in her initial interview, lamenting that she is no longer "getting the catcalls" as she walks down the street. McCabe follows Mecom as she gets Restylane, a breast job, and a tummy tuck--for $35,000 "cash up front." She relates, "I feel like I've been born again. I have a new life."

McCabe's father was a plastic surgeon. We see home movies of her and her brother playing monkey-in-the-middle with a silicon breast implant. At 10 years old, she accompanied her father on his rounds at Michigan's largest hospital, where he served as the Chief of Plastic Surgery. She is the keeper of his extensive photographic repository of "before and after" shots of patients. Although he was killed in a 1998 automobile crash, the presence of Dr. McCabe is pervasive throughout the narrative. He is an example of a plastic surgeon that his daughter sees as "making people happy." She believes that he had seen his fill of death while serving in Vietnam for a year as a trauma doctor and orthopedic surgeon and references his efforts with correcting children's cleft palates, mastectomy reconstruction, and post-accident correction--as much as his rejuvenation work. Dr. McCabe never criticized his daughter's appearance, and he serves as a model for the relatively good old days--before Botox became big on the scene.

McCabe, pushing 40 during the course of the film, is fighting her own demons about aging, which have been prevalent since she bought her first jar of anti-aging cream at 13. Part of her anxiety is rooted in her realization that "women become increasingly invisible as they age, while it is just different for men."

McCabe states that when she began the project in 2006, she was "pretty against elective plastic surgery, and anything that pierced the skin." Throughout her interviews (over 200 completed by phone, e-mail, and on camera), the audience wonders which way McCabe's inclinations will tilt. We follow her comparing wrinkles and shadows with a friend from her teenage years, and watch as she videotapes herself daily after the purchase of a $400 wrinkle cream--as she looks for signs of improvement. She resists being pulled into the giddy comradery of a New York City "Botox Meetup Group" that she finds on the Internet. This scene includes a dentist observing the procedure, as he plans to add revenue to his practice through offering Botox injections. The viewer is informed that anyone with a medical degree is credentialed to administer Botox.

Issues of job security, health insurance, and fear of aging are all mixed up in the equation. McCabe searches for answers from others--as well as from within. She admits that while making the film, her perspective has changed. While questioning the evolving cultural norms on how we "perceive physical aging" and the marketplace that has sprung up to cater to these concerns, McCabe remains non-judgmental of those who agree to speak with her.

McCabe has no trouble lining up professionals who are willing to mic up, state their names, ages, and viewpoints. Many are familiar faces on the beauty circuit. Dr. Nicholas Perricone (The Wrinkle Cure), Dr. Zein Obaji, and Dr. Fredric Brandt all engage in a spirited monologues about the benefits of Retin A, peptides, and Botox. On the surgery side, Dr. Franklin Rose, a top practitioner based in Houston, displays an unctuous manner and luxurious lifestyle. (It is noted that 'fewer and fewer" doctors want to become internists, given that primary care physicians and pediatricians make a fraction of what plastic surgeons earn.) He presents a clear foil to the warmth and genuineness of McCabe's father. Rose's daughter confides to McCabe that her father once asked if her "breasts were asymmetrical."

Throughout the film, women and men (perhaps the most gruesome footage is of a man's $12,000 hair transplant procedure) moving into late middle age are juxtaposed with twenty-somethings who declare anything over 28 as "old." One 26-year old gets Botox "because her forehead is a nightmare."

Living longer, working longer, dating later in life. Is plastic surgery the answer to ageism? Mixed in with the revelations of, "I'm scared of not having the money to keep looking younger," and the fears of "being alone and losing what you used to have," is the oft-repeated phrase from those interviewed of needing to retain their "self-esteem."

In watching Make Me Young, those questioning their desire to turn back the clock will realize that they are not alone. Others, looking for a definitive pro or con point of view, will have to settle for ambiguity...and look to themselves for resolution.

This article originally appeared on the women's health site Empowher.