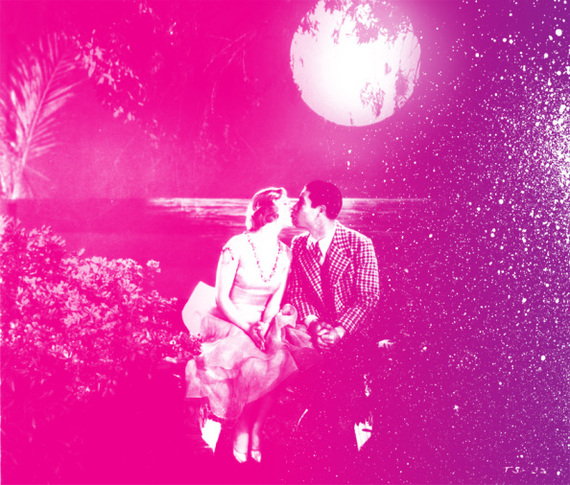 Ever since junior high schools were invented, people have been wondering how to make other people fall in love with them. In this attempt, they have passed notes saying "I love you, and even though you are with Sarah, I think you are hot," asked best friends to pass on the message verbally ("You're with Sarah but she thinks you are hot,") and "If I am with Sarah, why are you passing notes to me and saying you love me and asking people to tell me you love me, and do you want to get together?" Most of these attempts at lasting relationship failed.

The advent of Internet dating created a far more sophisticated version of junior high. Now women could post Photo-shopped versions of themselves, and men could randomly choose a photo of themselves with an ex, cut her out so that only a shoulder an arm remained, and post that. Members of both sexes could fill out lengthy questionnaires and then try to entice potential mates by writing things like:

"Blue eyes, slender professional 65-year-old, with body of a 30-year-old. Wrinkles free face and very young hands!! Only 150 pounds but they are all goooooooood quality ! I play the violin. Violin Rose is made for me in 2007 and is named after my Dear Mother who in 2001 went to Heaven and now is smiling at me. Violin Irene is named after my beautiful daughter Irene. Names of my violins are written inside violins on the violin maker label. Violins names Rose & Irene are also written in their Certificate of Authenticity. They are amazing and most beautiful instruments. I hope you will meet them ;-)!

(Note to Readers: The above letter is real and was received by Life in the Boomer Lane's friend Susan of Sex-and-the-Sixty-Year-Old fame, who continues to populate the pages of online dating sites and to collect extremely strange responses in return.)

None of these methods proved to be entirely successful, and both scientists and relationship bloggers continued to attempt to find ways to create an instant love connection between people.

Behind the scenes, Arthur Aaron, a psychologist, was working on a solution. Many years ago, he succeeded in making two strangers fall in love in his laboratory. These mice are now celebrating their twentieth wedding anniversary.

Aaron came up with a list of 36 questions that, if mutually asked, would make two people fall in love. The basis of connection, Aaron believes, is vulnerability. The idea is that mutual vulnerability fosters closeness. To quote the study's authors, "One key pattern associated with the development of a close relationship among peers is sustained, escalating, reciprocal, personal self-disclosure."

Lest you believe that this means that you are forced to reveal in full detail whatever it is that happens to your body after a large, fat and carb-laden meal, LBL will set your mind to rest. These questions are intended to create the kind of intimacy that occurs outside the bathroom. They are deep, thoughtful, and expansive. They reveal to another person what usually isn't revealed until much later in a relationship. For those of you who prefer the What do you do for a living/Where do you live/Do you enjoy walks in the woods and evenings spent in front of a fire-type questions, these questions are not for you.

LBL, because her devotion to her readers knows no bounds, and because she needed something to write about, corralled Now Husband and told him he had to help her by answering these questions. His response, "This could be a problem," was not an auspicious beginning. But, after LBL reminded him that over 11,000 people were sitting at their computer screens, waiting for this post and having their coffee go cold, he relented.

The questions bogged down at #4, "What would constitute a perfect day for you?" Now Husband's initial answer, "To be awakened by a (unmentionable)" wasn't promising (especially for LBL). But LBL, after assuring him that he really didn't want that action performed on him each morning, was able to elicit a more acceptable answer and move on. LBL slogged through the remainder of the questions. The notable answers were:

15. What is the greatest accomplishment of your life? Raising my parents.
32. What, if anything, is too serious to be joked about? Nothing.

The most surprising thing to LBL was that while she was asking Now Husband the questions, she was imagining someone asking her the questions and answering them for herself. She could see that a give and take of answers could very well catapult two people to a different place in their relationship, almost immediately. But, since Now Husband never asked LBL to answer those very questions, she had to conclude that, in her case, the deep and meaningful relationship created would be entirely one-sided. LBL was forced to terminate the experiment, and instead, wonder why she had chosen to spend her life with someone who believed he could make a joke about anything at all.

PHOTO GALLERY
Where To Meet Singles Over 50
Download
Calling all HuffPost superfans!
Sign up for membership to become a founding member and help shape HuffPost's next chapter
Join HuffPost

1 / 5
New Blood At The Party
Sometimes it feels like the foundation of your social life is so strong that you no longer find the opportunity to meet new and exciting people. Throw a barbecue or party in which guests bring a friend that no one in the group knows. Alternatively, tag along with a friend the next time their office has a company picnic or function -- this is a great way to meet somebody who you know is responsible enough to hold down a career and who you can 'check out' with an acquainted friend before you agree to a date.
Alamy