I grew up in Spain, and I still have memories of my elementary school teacher smoking in our classroom. Like many people of my generation growing up in Europe, I was consistently breathing secondhand smoke, at home, in academic institutions, in recreational settings, and on public transportation.

From a young age, I felt that I had a right to breathe fresh air. But unfortunately most of the adults around me seemed to be unaware of the difference between clean and toxic air. While a growing body of evidence demonstrated the harm caused by tobacco use and exposure to secondhand tobacco smoke, most adults, and even my peers, seemed to ignore it. I not only had to unwillingly breathe secondhand tobacco smoke for years, but I have also lost many loved ones to tobacco, including my own father who died prematurely of a cancer that was caused by smoking.

I can't help but reflect on my experiences, as I just recently turned 50, my father's age when he was diagnosed with a tobacco-related cancer that would kill him shortly thereafter.

I know that I am not alone: tobacco is a unique product that kills half of its consumers. The World Health Organization estimates that tobacco killed 100 million people in the 20th century, and unfortunately today, tobacco still kills 6 million people per year.

According to Helen Clark, the head of the United Nations Development Programme, tobacco use costs the world over 1% of its total GDP. World Bank figures suggest that in 2014, the total world GDP was over US$77 trillion. This means that tobacco costs the world at least US$770 billion per year.

The world cannot afford this tremendous loss of life and financial resources because of the greed of tobacco companies. 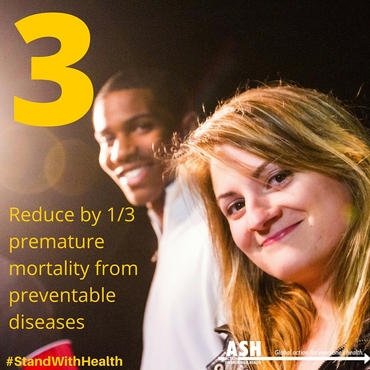 The SDGs will serve as a roadmap for global leaders to finance and create change within their own countries. If implemented, these changes will lead to good health and well-being, zero hunger, quality education, and reduced inequalities, to name a few of the 17 goals.

Extreme poverty was cut in half as a result of the UN's Millennium Development Goals (MDGs), which were implemented from 2000-2015. That's only the beginning. As of September 25, 2015, the MDGs have been replaced by the Sustainable Development Goals (SDGs).

The SDGs are different from the MDGs in many ways, one being that the SDGs ask the global community to address the health crisis spawned by tobacco use by implementing the global tobacco control treaty, the WHO Framework Convention on Tobacco Control. The FCTC lays out a range of measures that Parties should take to end the tobacco epidemic, such as requiring smoke-free spaces.

One billion lives hang in the balance this century because of tobacco use. The tobacco-related epidemic is a development challenge that the world can overcome in the next 15 years.

Now that the SDGs have been adopted, it's our job to make them known and to hold global leaders accountable for financing and implementing these life-saving global goals.

So join the global initiative to spread the news of the SDGs. These 17 goals are ambitious, but together, we can achieve them.

Post on social media using #GlobalGoals to tell the world which goal is most important to you.