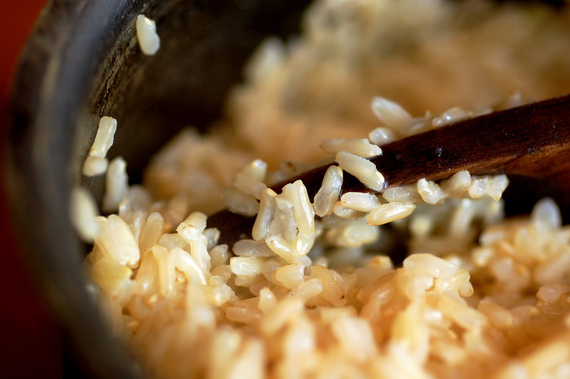 Rice, Oryza sativa, is responsible for feeding more people over a longer period than any other crop. It feeds over half the global population, providing more than 3.5 million people more than 20 percent of their daily calories. It makes up one-fifth of the calories consumed. It is also a key staple of a plant-based approach to eating, along with other whole grains, fruits, vegetables and legumes.

There are approximately 40,000 varieties of rice. The most common varieties are typically classified by size and texture such as long, medium, and short-grained, and by the strain such as white, brown, red, black or purple There are also specialty rices, which include risotto and aromatics such as basmati, jasmine, and japonica.

Not All Rice is Created Equal

The nutritional value can vary depending on many factors including the type of rice, the soil the rice is grown in, if and how the rice is polished or processed, the manner it is enriched, and how it is prepared before consumption. After rice is harvested, the hull must be removed in order for it to be edible. If the rice is milled further, the bran and germ are removed, resulting in white rice, which is the kind of rice that most people eat.

White rice, although the most popular, actually has lower levels of health-promoting nutrients. The bran is the outer layer of the rice kernel. It contains nutrients like protein, fat, and dietary fiber as well as minerals like potassium, calcium, magnesium, manganese, thiamine, riboflavin, niacin, and iron. The bran also contains antioxidants such as tocopherols, tocotrienols, and γ-oryzanol, which are shown to having as immune-enhancing and cancer-fighting properties.

Making a switch from white rice to brown rice has been shown to positively impact your health. This includes lowering the risk of diabetes, decreasing cardiovascular risk by improving cholesterol levels, lowering blood pressure and antioxidant activity, while providing protection against inflammation and cancer.

The Varieties of Rice

White rice is a common staple in many cultures, especially Asian and Pacific cultures, including Hawaii. White rice is milled and polished, which alters the flavor, texture, appearance, and helps to extend its storage life. Removing the bran, germ and husk prevents the rice from spoiling. During this refining process, however, white rice is stripped of iron, vitamins, zinc, magnesium and other important nutrients. Manufacturers in the U.S. are required by the Food and Drug Administration to add back some nutrients such as iron and some B vitamins, although magnesium is not added back in. These nutrients are added back in the synthetic form and depending on the enrichment process, up to 85 percent of nutrients can get lost if rice is rinsed prior to cooking.

Even when white rice is nutrient-fortified, it does not match the nutritional density of whole grain rice and lacks the bran, which has been shown to provide the impressive health benefits. White rice does not show the health benefits demonstrated by whole grain rice since many of the health promoting nutrients and phytochemicals are lost in the milling process. Short grain white rice also has a high glycemic index compared to whole grain rice such as brown, red, wild and basmati rice, since it does not contain the fiber from the bran, which slows down the absorption of sugars into the bloodstream.

Parboiled rice is also called converted rice, which means that it has been partially boiled in the husk. The three steps include soaking, steaming and drying, and then removing the husk of the rice. This process enhances the nutrition density by driving certain nutrients from the bran to the endosperm, making it about 80 percent nutritionally similar to brown rice but with a better source of fiber, calcium, potassium, and B-6 than regular white rice. It also has a lower glycemic index than white rice. The steaming does not precook the rice, so it can take about 20 minutes to cook parboiled rice.

Brown rice undergoes only minimal processing. This means that most of the nutrients including thiamine, calcium, magnesium, and potassium are retained. The protein, fiber, and health-promoting and protective bran also stays in the rice. The shelf life of brown rice is 6 months.

Black derives its rich color from phytochemicals, anthocyanins and tocols, which are located in the inner portion of the rice bran. Research suggests that these health-promoting phytochemicals possess protective antioxidants. Zhimin Xu, an associate professor at the Department of Food Science at Louisiana State University Agricultural Center in Baton Rouge, La. Xu reported on research on black rice at the 240th National Meeting of the American Chemical Society (ACS). Xu has said: "Just a spoonful of black rice bran contains more health promoting anthocyanin antioxidants than are found in a spoonful of blueberries, but with less sugar and more fiber and vitamin E antioxidants."

Red rice is a special variety of rice, which derives its rich red color from anthocyanins. Anthocyanins not only provide the rice's unique color, but also deliver protective antioxidant properties and anti-carcinogenic activities, which aid in cardiovascular disease, diabetes, and cancer prevention. In comparison studies of different rice varieties, red rice has shown the most promising health results due to the high levels of antioxidants. Red rice has 10 times the antioxidants of brown rice. Red rice is also nutrient dense with 20 percent of the daily values for magnesium, phosphorus, and molybdenum. Red rice has a pleasant nutty flavor with an earthy tone.

Long grain rice is like its name, long and slender. It has has a lower glycemic index than shorter grain rice. It also tends to be fluffier and less sticky than short grain. Types of long grain rice include Basmati, log grain red and brown.

This rice is shorter and plumper than long grain and tends to work better for a plant-based risotto or paella.

Short grain rice is almost round in shape. The grains become glutinous and sticky when cooked, which is why it is also called "sticky rice." This is the best choice for rice puddings, sushi and rice balls. However, short grain rice is higher in glycemic index.

Germinated brown rice (GBR) may be soaked in warm water for 8 to 24 hours to stimulate germination. This process activates enzymes to improve the nutritional value of brown rice and can increase fiber, B vitamins and magnesium by as much as three times. It also has been shown to decrease oxidative stress. The activation of the enzymes enhances amino acids including gamma-aminobutyric acid (GABA) that have been shown to help protect against certain cancers.

Research has shown many improved health benefits from eating whole grain rice varieties such as red and black rice. Comparative nutrition studies on red, black and white varieties of rice suggest that pigments in red and black rice varieties may protect against chronic diseases. People who eat red or black rice have shown a reduction in the progression of atherosclerotic plaque development, induced by dietary cholesterol. White rice consumption did not show these effects. The research indicates that this may be due to the lack of antioxidants in white rice that are present in red and black varieties of rice.

Emerging evidence, such as this study published in Advances in Nutrition in 2012, shows the protective properties of rice bran on certain cancers such as breast, lung, liver, and colorectal. The protective benefits have been linked to the phytochemicals present in the rice bran portion of rice. The phytochemicals found in rice bran have been found to protect against tissue damage by free radicals, the blocking of chronic inflammatory responses, the activation of anticancer immune responses and improved microflora in the gut. This study used a variety of whole grain rice.

Note: approximate based on variety of whole grain rice.

Serving size (based on American Diabetic Association exchanges): 1/3 cup cooked
Calories: 70
Carbohydrates: 15 gm
Fiber: .5 gm
Protein: 1.3 gm
Ornish Reversal Recipes
Note: You can swap most of these with any varieties of rice such as brown, red and black.

What is your favorite way to enjoy rice?

Have a questions regarding transforming your way of eating and living, "Ask Dr. Ornish"!