Distant starlight has given astronomers the best look yet at a distant icy sibling of Pluto, a dwarf planet called Makemake that appears to be missing its atmosphere, researchers say.

Although this icy world currently lacks an atmosphere, there is still a chance it could form one like a comet when it approaches the point in its orbit that is closest to the sun, scientists added.

In the past decade, astronomers have discovered a slew of "dwarf planets" that dwell with Pluto beyond the orbit of Neptune. Makemake was a world nicknamed "Easterbunny" by its discoverers before officially getting named after the Polynesian creator of humanity and the god of fertility.

The dwarf planet's red-tinged surface is apparently covered by a layer of frozen methane, and is bright enough to be seen by a high-end amateur telescope, despite its current distance of nearly 53 times the distance between the Earth and the sun. [Makemake's Missing Atmosphere (Video)]

Makemake is a type of icy dwarf planet known as a plutoid, as are Pluto and the newfound trans-Neptunian worlds Erisand Haumea.

In 2011, Makemake passed directly in front of the distant star NOMAD 1181-0235723. This eclipse or occultation helped backlight the icy world, and researchers now reveal data from seven telescopes of this eclipse has helped them pin down Makemake's size, shape and surface properties better than ever. [Dwarf Planets of the Solar System (Infographic)]

"For me it is extremely remarkable that we can get an accurate knowledge of important properties of these mysterious dwarf planets even though they are so far away from the Earth," said lead study author Jose Ortiz, a planetary scientist at the Institute of Astrophysics of Andalucía in Granada, Spain. "Only three years ago we had never observed a single occultation by a trans-Neptunian object, and now we have managed to observe 12 such events, nine of them by our international team."

Such occultations are extremely difficult to predict and observe. For comparison, these worlds are so distant they appear about the same size "as that of a coin seen at a distance of 30 miles (50 kilometers) or smaller," Ortiz told SPACE.com. "But thanks to our hard work and to an important international collaboration, we were able to beat all the difficulties."

Makemake is about 890 miles (1,430 km) wide, making it about two-thirds the diameter of Pluto. Light from this distant star appeared and disappeared quickly as Makemake passed in front of it. This suggests there was no significant atmosphere around it to smear out the star's light.

At most, Makemake's atmosphere is 80 million to 250 million times thinner than Earth's at sea level, the researchers calculate. Still, there might be patches of atmosphere overlying warmer regions on its surface, such as dark patches that absorb more sunlight. 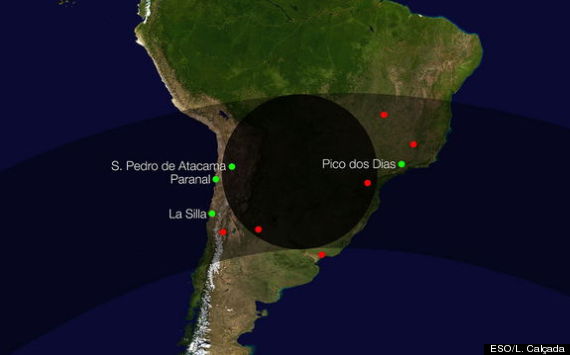 This diagram shows the path of the shadow of the dwarf planet Makemake during an occultation of a faint star in April 2011, which revealed that it lacked an atmosphere. Several sites in South America, including ESO’s La Silla and Paranal Observatories, saw the star disappear briefly as its light was blocked by Makemake.

Other bodies with patchy atmospheres include Jupiter's moon Io and Saturn's moon Enceladus, which arise "mostly from gas released by volcanoes or the so-called cryovolcanoes, 'volcanoes' which instead of releasing magma release liquid water or a liquid mix," Ortiz said. "Even Mars has areas with a locally denser atmosphere, which in this case arises from sublimation of carbon dioxide ice."

Makemake might very well behave like a comet and grow an atmosphere during the parts of its year when it approaches the sun.

"We suspect that this is the case," Ortiz said. "But comets are usually so small and have so little mass that their gravity does not allow them to retain the atmospheres, which escape to space giving rise to the comets' tails. In the case of Makemake, its gravity is much higher and therefore the escape of the gases is not as dramatic as that of the comets."

Future research can focus on looking for other stellar occultations by large trans-Neptunian objects.

"We can now investigate trans-Neptunian objects with far more in depth than we could a few years ago, thanks to the stellar occultation technique," Ortiz said. "This will not only shed light on atmospheric phenomena, but also on important physics of these bodies. We would also like to explain and understand the similarities and differences in composition of the trans-Neptunian objects in general, which requires theoretical developments, models of different physical phenomena and plenty of work in many fields."

The scientists detailed their findings Nov. 22 in the journal Nature.