I've struggled with writing about the Maker Faire for about a month (I'm press- not a journalist). It's easy to gush about the wonders of tech's open pastures, or tougher to diametrically write existentially about future doomsday scenarios, which I admit is much easier for me. 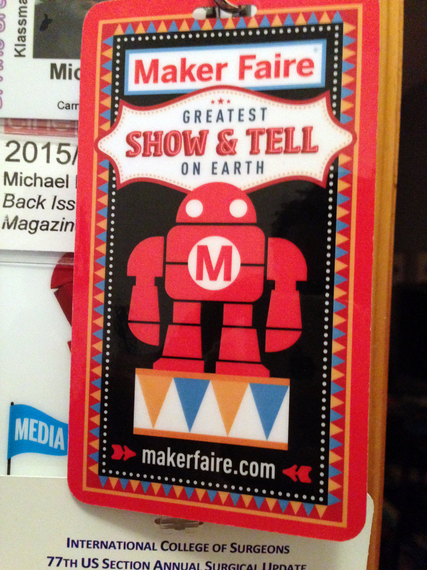 I did four interviews with people running companies that will influence the near future. When I got there all I wanted to do was blow off all responsibilities like a kid, drink beer and gawk at the latest whirligigs, but somehow, luckily I kept my day's appointments.

The companies that interest me most are the ones other company's tech will be based on; the kind that create cottage industries. The most obvious of these is the microcontroller. For those who are not at the TechCrunch vanguard, a microcontroller is tiny self-embedded system computer on a chip. Think of a credit card that has a power outlet, solid-state flash memory, Ethernet port, and the newer ones have linux to program on. They run on low power, which addresses our computing needs for the inevitable 21st Century oil scarcities. I look closely at the environmental impact of devices because I spend every day imagining future landfills- musing on doomsday fantasies.

I conducted four interviews at the Maker Faire. I knew I didn't have a lot of time so I went with the first four that contacted me. 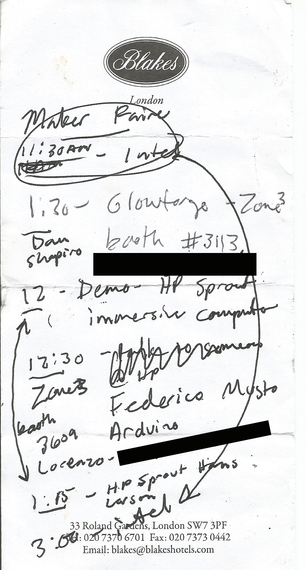 Fortunately- they were all doing mind-bending work. Unfortunately- I dropped my phone the day after the fair and lost all my recorded voice note interviews in a schmuck-like accident. So much for techtopia, however I will try not to make too much stuff up.

My first interview of the day was with Federico Musto of Arduino S.R.L. Arduino was first and at the front of the microcontroller revolution. I don't know if that's true, but the Arduino Uno was the board that turned me on first. There is some kind of lawsuit over the name, so there are two Arduino companies. Mr. Musto and I had a pleasant conversation about their new boards Arduino Yun and the Arduino Tian. Not being a serious tech guy I could not understand the difference between boards but I pretended hard. These boards are the brains in the next generation of smart devices. When you talk to the other board makers they mention Arduino.

Competition and ambition are only lightly touched upon in my interviews given the positive spirit of the Faire. I see this as a testament to Richard Stallman's work on the Free Software Project , GNU licensing and everything open source (AND the hippie idealism which inspired the first wave of hackers to create the software/hardware miracle that you're reading this on)

The second interview I did was with HP. When you visit a pavilion of someone huge like HP, it's a bit corporate so you know you are in for a little bit of showbiz. They gave me a nice a demo on The HP Sprout the world's first "immersive computer". The HP Sprout is like science fiction. It is a regular looking desktop computer environment at first glance but it's a touchscreen and has another screen where the keyboard would be. It can be a keyboard but another photo based editing or scanning environment. There is a scanner coming off the top of the monitor that scans whatever object or document that is under it. It may be the world's most psychedelic computer.

This is the point where I think I suggested to my foxy date that we should drink beer because every event has it and fuck it- we ARE the press. Courtney and I got French fries and drank on bleachers watching a "drone war" that was being contained by a giant boring safety net. I commented on how it would be so much more exciting if the drones could hurt people and make them feel alive with insurance money lust. Suddenly from the bleachers over the loudspeaker played Roxy Music. I don't recall but I feel like it was a deep cut like Grey Lagoons or Prairie Rose. I would have been totally happy there but then they followed it up with 80's King Crimson's Man With an Open Heart and then Model Man from Three of A Perfect Pair. All of the sudden The Maker Faire had a fuck ton of style and it placated me for awhile.

Next up- we had a delightful afternoon chat with two interesting guys from Intel. Jay Melican is the senior research scientist at Intel and James Jackson is the General Manager of Intel's Maker & Innovator Group. While we discussed the capabilities of the Intel Edison and the Intel Curie I tried to understand what makes these boards different from the other boards. I got the sense that the guys who are at the front of the microcomputing world are less concerned about what people will do with it. This is key to understanding this place. Huge corporations like Intel have everything to gain by letting people like Jay and James head up departments of inventors. You wouldn't want these dudes inventing stuff for the competition. It's no accident that the awesome HP Sprout computer we saw was running Intel chips. The customers here will buy lots of product.

My final interview of the day was with an affable Dan Shapiro the CEO of Glowforge. They were riding a startup high after receiving a boost of serious venture capital. Many small businesses will emerge from the Glowforge, which is a 3D laser printer. It cuts, it engraves. It cut out shapes as Mr Shapiro showed us a laptop bag he had made with it, using the cutting feature. Small scale manufacturing with this thing will be coming out of garages soon. This revolution will most likely start global/locally on Etsy.

The 3-D printing disruption hasn't occurred in manufacturing yet. Not on a scale that has slowed down the old system but at Maker Faire we all know it's inevitable. The pervasive optimism that surrounds tech's achievements is its lifeblood. Positivity gets results. The peace and love spirit of the 1960's is more alive with the Makers than with any other subculture I've observed.

At last year's Maker Faire, I got really turned onto the potential of microcomputing and the vogue for "The Internet of Things" which means every object can be embedded with computers that can communicate with one another, bypassing us humans. Robotics is certainly exciting, but the Maker Faire is about showing off the ideas you haven't thought of such as a brain sensing smart lamp.

I reluctantly accept the utopian vision and ignoring the real human atrocity exhibition we are pretending not to notice. As I mentioned last year, I would still like to see an adult Maker Faire and take in some exhibits on how microcontrollers are affecting sex, warfare and drugs. We could use the Maker's on AIDS, drug addiction, cancer and all the other unsolvables. That has to be next- a different day altogether.