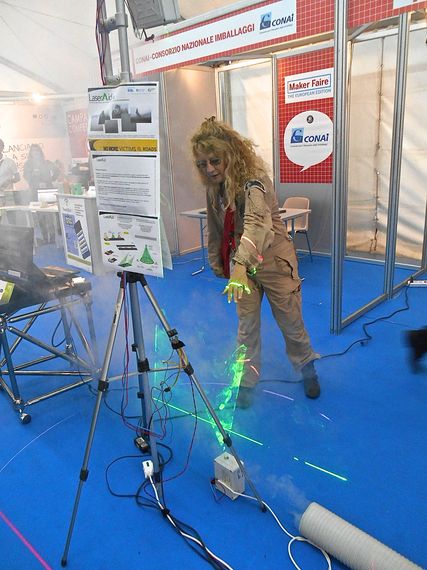 Maker Faire Rome, in its third year and already a tradition, had a hundred thousand visitors. Students were the protagonists this year: the huge fair was held all over the wide campus of the Sapienza University of Rome.

Real Italian revolutions have had smaller crowds than Maker Faire Rome did. The prestigious Sapienza campus, founded in 1303, was rented, gated and dedicated to the fair's themes of innovation and new technological futures. Squads of flying drones and giant steel 3DPrinters are certainly a futuristic departure for an Eternal City so heavy with castles, churches and catacombs.

Microsoft, Google, Intel and IBM were much in attendance, while the Sapienza's leftist students were miffed to find themselves locked outside their own campus gates and forced to pay for tickets to see the hundreds of exhibitors. Sapienza's employees were also on involuntary holiday, and the joint student-worker protests brought in a further audience of armored Roman riot cops. Makers or not, this is still Italy where people protest, react, have their say in the streets.

Any Italian event with a hundred thousand people will bring out the radicals, and the Sapienza students, who were a small for effective and motivated group, confronted a heavy police presence for many hours. The protests climaxed in nightstick beatings and four student arrests.

This wasn't really a conflict over Maker Faire, more a principled struggle between the dean and the students over the commercial use of the Sapienza campus. It's rare to see any academy nowadays that prefers student democratic process to the allure of wealthy corporate sponsors.

This small but typically modern struggle took place in the Roman square symbolically named after Aldo Moro, the Italian premiere kidnapped and executed by the Red Brigades. Inside the Sapienza, the campus buildings bear the august names of scientists and writers such as Primo Levi and Italo Calvino.

As usual at Maker Faires, there were a lot of weird disaster playgrounds and pre-visions of catastrophe, the powerful psychological emanations from lone inventors who feel that no one in authority is ever likely to help them. However, this year, the wares on display were dominated by everyday life tech inventions more or less intended for real people: smart wearables, light bulbs transmitting internet data, smart gardening, interactive home floors, open source foods and, of course, elaborate Italian coffee machines.

As social movements go, there are some oddities about the open source Maker Movement. Maker objects still look pretty much the same as commercial products of standard capitalism, but they are simpler to assemble, strangely impersonal, often uncomfortable and not necessities of life.

They are expressions of creative freedom, a kind of philosophical toy rather than an answer to life's needs. But that is why homes of the future, such as our project Casa Jasmina, are becoming necessary. We need to refine our tools and skills, but also need courage to live in a different way.

Makers already have their own fashions: the checked shirts, rather ugly shoes (by Italian standards) oddly combined with fancy wearables and designer glasses. They seem more relaxed that average Italians, more global in their tastes. But they still would never give up their superb coffee and pasta.

Open source luxury is what country like Italy has to give to the world. "Connected homes" are connected to us, they should be our safe place, our toy but also our joy.