The Changing Politics of Climate Change: We're Suddenly in a New and More Hopeful Place. Here's Why.

"I'm here to hype Eric Pooley," Jim Fleming says with a big smile. Fleming is Professor of Science, Technology and Society at Colby College, Maine. His background includes a prestigious Woods Hole Oceanographic Institute fellowship and authorship of numerous texts on climate, meteorology, and weather from an historical perspective. He earned a Ph.D. in history from Princeton University. He's hosted the entire Roger Hertog Global Strategy Lecture Series this summer on campus at Columbia University, and tonight he introduces Eric Pooley.

Here's the new message Pooley contributes tonight: "We are at the start of a new chapter in climate politics. A new phase is beginning" -- and just in time, since we are in the act of altering the biochemistry of the Earth.

"As we push past 400 parts per million of CO2 in the atmosphere, ocean pH is being altered, species ranges are shifting, including pests and pathogens, and the timing of some migratory animals and their food supply are becoming disconnected. There is so much warming locked in now that the question is no longer can we stave off impacts, but can we bend the curve down toward safety in time to avoid catastrophe?" 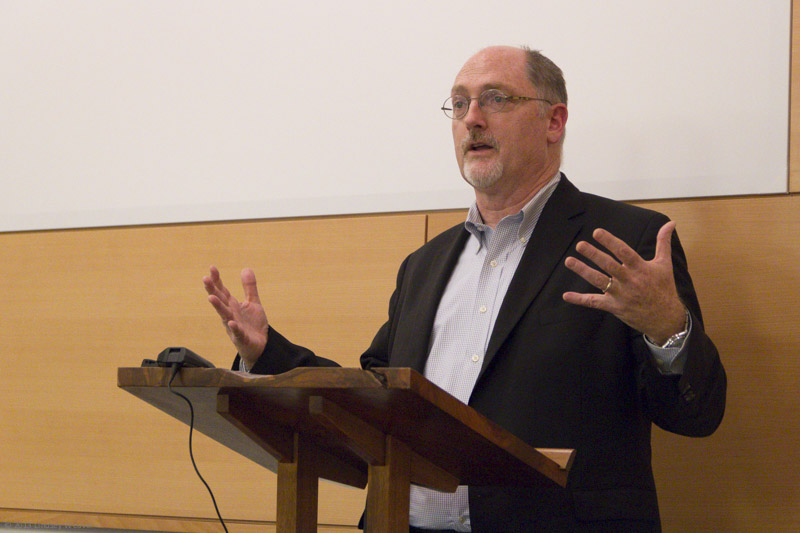 The changing climate is changing the weather. As people wake up to this, the politics are beginning to change as well.

Pooley says he's hearing it from the public. A utility lineman in Indiana reports that heat and storms are more brutal. People working in outdoor settings notice a palpable shift. Climate change no longer seems abstract. It is hitting home, and that's changing the terms of the debate.

There is a trend. Not one specific storm, but a whole series of extreme events: Record breaking droughts; wildfires getting wilder and more rampant; extreme weather events with Hurricane Sandy as an exclamation point. Pooley thinks that President Obama senses Washington needs to catch up with current feeling in the general public. After all these storms and tragedy, people are talking -- and thinking -- about climate change issues.

Climate change did not create Sandy, but it made Sandy more deadly. Without climate change effects, the sea levels would not have been as high. The ferocity of the hurricane's power would not have been what it was. Flood waters in lower Manhattan gushed through the power-outaged subway system like it was the set of a 3-D horror movie, and only the zombies were missing.

Like extreme weather, there's another factor that used to be abstract and now is becoming concrete in people's lives. And that's the promise of clean energy jobs. Lots of people now know someone who works in the solar industry, or the electric car industry, or the wind industry. They're not "green jobs," they're robust jobs -- and one key to economic innovation that can power the U.S. in the 21st century. "The fossil fuel economy was great for the 19th and 20th centuries," Pooley tells us. "People know we need a new economy for the 21st century. They want to go forward, not back. They want an innovation revolution for energy like the one we have had for IT." Pooley gives the example of the rotary phone. Suddenly, when the market opened to allow competitors, and was no longer exclusively 'Ma Bell,' we had cell phones with an aftermath of near-genius, explosive design and development.

Superstorm Sandy ended a lull, a climate silence, in Washington that had existed since 2010. Now people once again feel pushed into action. Lethargy is the sentiment of the past, not the present. President Obama's climate speech in June was an important milestone. The president proposed historic carbon standards for new and existing power plants, the single biggest source of U.S. climate pollution.

It's different now. We are in a different place as a society. The weather has concretely changed, and it's a bipartisan reality. (The morning after Pooley's talk, the New York Times publishes a plea for climate action from four leading Republicans.) Let's tell the story effectively, Pooley encourages, so that we don't lose momentum. The window of opportunity now open can close, if we don't figure out how to take advantage of our luck. People don't want an environmental agenda politically shoved down their throats, but they do want intelligent engagement. People want safety. We all want a future.

Economists agree across the board: doing nothing will cost us all more than doing something.

The business community is starting to reverberate with a new voice. The next generation of leaders is coming of age. Leadership in Washington doesn't lead, they follow their constituents. They will listen, if we, the people, speak. Let's debate best ideas about how to move forward, reduce climate pollution, and accelerate clean energy. Global warming due to carbon pollution and conventional atmospheric pollutants creates one big soup that we can address with a single discourse. The problems are clear. The fixes will be forthcoming.

International leadership (Obama, the Chinese) is essential. Chinese leadership seems to grasp the problem of climate change and have launched the first of seven Cap and Trade pilot programs. Pooley describes air quality in Beijing as extremely poor. China must address a conventional pollution crisis as well as climate change. If the U.S. and China can agree on a course of action -- each pursuing its own effective strategies -- this will give tremendous drive to a global solution. We can't sit back, linger, look away, or forget. American has to take the lead.

Pooley muses, "Can we as a society handle the truth? The web of life as we know it is at stake."

We've got to be rigorous about the science involved and at the same time grow better at communication. We need grassroots involvement: everyday people leading their lives and involved in the discourse of our common environmental future.

Long-term, abstract uncertainty is hard for people to grasp, but we have recent incidents of destruction to render the abstract tangible. We rely on fossil fuels. It will take time to evolve out of our dependence. Yet change is possible, inevitable. If we don't make a change, future generations of humanity will see their quality of life erode. An ethical mandate exists to steward our environment for the sake of our children and grandchildren. Correlation between extreme weather and climate change has come to town. This is the way of the world now.

Huge impediments lie in our path. Weather is dynamically transformed. There is a climate change fingerprint on our weather now. A maker's mark.