Well, we've made it through another season of The Bachelor. The editors cut the footage with a heavy hand to make us think Chris would ultimately think with his dick and pick the distant, unamused, hot virgin, Becca, instead of the much more sensible choice, Iowa-loving, family-embracing, 100 percent gung-ho, baby-talking (in ALL senses of the word) Whitney. It's one of the great ironies of The Bachelor/ette, that the person who chooses to get engaged at the end of show is at the height of their celebrity, with their dating options exponentially increased to stratospheric proportions -- not exactly the ideal time to settle down. But no L.A. model is going to want to become a farmer in Bumblefuck, so perhaps Chris Soules will forgo all the effortless sex his D-list status could offer and stick with Whit. Still, the odds are against it, Arlington or not. We shall see.

Much more of a surprise than Chris's pick and full-on engagement was the announcement of the next Bachelorettes -- yes, plural! With all the talk last week of Kaitlyn unofficially confirmed as the next Bachelorette (much to the chagrin of loyal Britt-ophiles everywhere), we were just waiting for Kaitlyn to be introduced by Chris Harrison, dutifully make her appearance and take her place next in line. So when Britt was invited to crash the party, cheers and moans erupted simultaneously all across Bachelor Nation (did we just use that term unironically?). 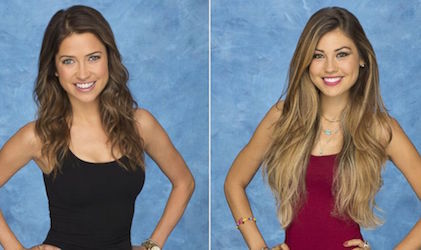 Apparently, Britt and Kaitlyn (pictured above) will be joint Bachelorettes. But like Highlander, there can only be one. The two will enter the mansion, but -- according to some show rules seemingly yet-to-be-determined by the producers -- only one will be left to hand out the final rose. Surely, it will boil down to who is the better liked (or lusted after) by the guys in the house.

It's a great new gimmick to get people talking about the show -- we're doing it right now! -- but here's why we don't like it:

The show started off 13 years ago on seriously shaky sexist ground by having a large group of women essentially fighting over one man. It encouraged and emphasized tired stereotypes about the cattiness and desperation of women. It was only after they turned the tables one year/two seasons later and introduced The Bachelorette that the franchise became much more palatable, revolutionary even. By showing that whole groups of men were just as interested in love and marriage, that they could talk publicly about their feelings too, and that a woman could seriously enjoy kissing (and even having sex with) multiple people just as a man could, the show could actually be accused of being practically feminist!

It wasn't ideal. For the first several years, The Bachelor seasons outnumbered Bachelorette seasons two to one, giving the impression, perhaps, that producers couldn't find enough men crazy or stupid enough to sign up for the same humiliation that countless women seemed ready for. And in 2006 and 2007, there were no Bachelorettes made at all, while The Bachelor marched steadily on. Not until 2008 did the two shows achieve equal footing, with one show of each made every year through to the present. The Bachelorette still traded in the old fashioned notion that men have to do the proposing, even though she was basically making the call, but at least for every man who got his pick of the litter on The Bachelor, one woman could do the same on The Bachelorette.

Which is why this gimmick of two dueling Bachelorettes is so disappointing. It feels like a step back for the show. Before, one woman rejected from The Bachelor could have redemption, total attention and complete control on The Bachelorette. The idea of having to fight for or over a man was refreshingly removed from the process. But now, by reinserting this element of competition back into the process, the once elevated status of the Bachelorette has been undercut, marred. To co-opt language usually reserved for elected office, it is beneath the dignity of the position of the Bachelorette.

You could see the disappointment and humiliation in Kaitlyn as she stood there awkwardly next to Britt on "After the Final Rose," looking down at the ground, biting her lip, forcing those smiles. Britt, having thought she was a no-go as the fifth-to-last out on Soules's season, seemed just happy to have more air time -- hey, two Bachelorettes are better than none for me, the adorbs L.A. "waitress"! But clever Kaitlin, who must have been as certain as we were that she was going to be crowned queen for a season, couldn't hide her mystification at this lost opportunity, this reneged title, this chance to be rejected all over again. As she admitted last night with this understatement, "It's not ideal."

One could argue this turn of television events is no biggie since the show's done this before, with men. In season 6, the first-night cocktail party featured two potential Bachelors -- Byron Velvick and Jay Overbye -- and had the ladies decide who was going to stay for the rest of the season (they chose Byron, and he ultimately chose Mary, and six years later they chose to go their separate ways). They put two guys through this ringer, it's only fair the gals get their turn, right? But it was lame back then, and it's lame now. And this case feels a bit more cruel, since the two people involved are now personalities that American viewers feel they have gotten to know -- whoever loses, their second rejection will be that much more humiliating and, the producers are betting, that much more entertaining. Gross. (But will we still watch? Does Chris Harrison have an unnatural compulsion to explain simple math?)

Let's just hope that the gimmick doesn't last, that it doesn't deliver in the entertainment department, that Bachelor Nation rejects it as an exploitative step too far, and/or that the producers call it quits once they've tried it with both men and women. If the gimmick has staying power, then the only way we could feel any better about it is if it's used across the Bachelor/ette board. It would still be undignified, campy and unrealistic objectification, but at least it would be equal-opportunity objectification.

Read up on last week's love lessons learned from "The Bachelor."